The King of Hyrule was a wise ruler of the kingdom of Hyrule long in its past that was featured in the backstory of The Adventure of Link.[2] He was the last in a long line of Kings who wielded the entire Triforce after Link reclaimed it in A Link Between Worlds.[3] 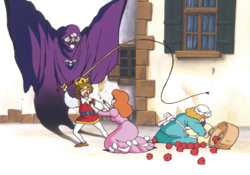 Princess Zelda is interrogated by her brother and the evil magician about the Triforce.

In the backstory of The Adventure of Link, it is revealed that there was once a great and wise King of Hyrule that governed the land with the strength of the united Triforce as his command.[4] However, the King too was human and, anticipating his death, he hoped to find someone with the innate qualities that were fitting of a worthy possessor of the Triforce for if it were to fall in the wrong hands, evil would befall Hyrule.[5][6] Unfortunately, he was unable to find any such person during his lifespan and, since his own son did not fit this archetype for being worthy to possess the one true Triforce,[7] the King elected to split the relic into its three component parts, leaving the Triforce of Power and the Triforce of Wisdom within the kingdom.[8]

The Triforce of Courage, however, shared a different fate than that of its counterparts. In secret, the King spirited this piece of the Triforce away to the distant and dangerous Valley of Death, where he concealed the relic within the deepest sanctums of the Great Palace[9] that was set at the head of the valley, guarded by many powerful monsters handpicked by the King himself.[10][11] The King cast a magical barrier over the entire Valley of Death, one that would not grant entry to the valley until six special crystals were restored to their respective statues in six other palaces that lay across Hyrule. He also secretly cast a spell over all of Hyrule, one that would, at some point in time when a worthy person was born and came of age, cause the symbol of the Triforce to appear on the back of the hand of this special individual, marking him as the King’s chosen person to reclaim the Triforce of Courage.[12] Soon after this, the King’s time was drawing to a close, and before he died, he confided what he had done only to his daughter, Princess Zelda, choosing to not tell any of the secrets of the Triforce to his son.[13] 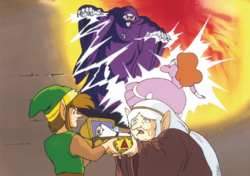 After the King’s death, the Prince of Hyrule hoped to claim the Triforce, but he was angered and dismayed to find that he would only inherit it in part.[13] He searched the kingdom high and low for the third piece, but he was unsuccessful.[13] After being told by a mysterious magician that the king had told Princess Zelda about the Triforce's whereabouts, the Prince confronted his sister, but she refused to tell him of the king's secret even after threatened of being put into an eternal sleep.[14] Angered, the magician decided to cast the spell on the princess against the prince's wishes, and at the same time that Zelda fell, the magician also breathed his last and died.[15]

Link would eventually appear with the mark of the Triforce on his hand and hence be the one chosen by the King of Hyrule. After being told of the king's history by Impa, he ventures off to place the six crystals in the palaces around Hyrule, enter the Great Palace, obtain the Triforce of Courage and thus awake the slumbering princess, granting the king's wishes. 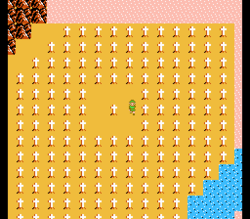