From Zelda Wiki, the Zelda encyclopedia
(Redirected from King of Evil Trident)
Jump to: navigation, search

Trident are recurring Objects in The Legend of Zelda series.[citation needed] 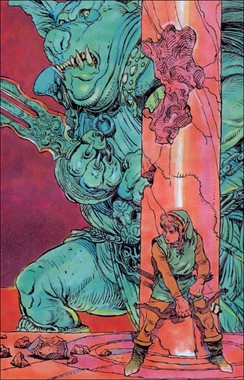 The Trident makes its first appearance in A Link to the Past, where Ganon uses it in the first stage of his boss battle. He will spin it and toss it at Link while sending Blazing Bats after him. After a certain point, Ganon will abandon this tactic and use his secret technique of Darkness in lieu of the Trident.[1]

Although a Trident-wielding Ganon does not appear anywhere in Link's Awakening, the final boss will take Ganon's form and attack Link by throwing a Trident at him in a similar fashion to how Ganon attacked in A Link to the Past.

The Trident reappears in Ocarina of Time, wielded by Phantom Ganon, who uses it to summon energy balls and throw them at Link.

Oracle of Ages and Oracle of Seasons

When Ganon is revived in the Linked Game ending for either Oracle of Ages or Oracle of Seasons, he uses a Trident to battle Link. He either attacks with a vicious direct swipe or a flurry of energy balls. Most of these attacks can be dodged using the Roc's Feather or Roc's Cape.

In Four Swords Adventures, Ganondorf found the Trident when he broke Gerudo law and entered the Pyramid across the Desert of Doubt.[2] Inside, he found it underneath an inscription that promised its wielder the power to become the King of Darkness.[3] Ganon uses this Trident during the final battle, where his attacks include throwing the Trident with a trail of blue fire, and shooting a flurry of lightning bolts that send the Links into the Dark World.

Ganon believes that his Trident will grant him the power to destroy the Links, threatening to skewer them on it.[4] Princess Zelda recognizes the Trident and refers to Ganon as the "ancient demon reborn" because he wields it.[5]

A Knight of Hyrule mentions that Ganon used the Trident to defeat the Knights and send them into the Dark World.[6]

When Ganon and Yuga join together, they wield a golden weapon that is a combination of Ganon's Trident, and Yuga's magical paintbrush staff. Yuga Ganon uses this Trident in order to combat Link at the end of the game until he absorbs the Triforce of Wisdom and begins using magic instead. The Trident is infused with dark power and is also used as a throwing weapon once more, but also retains Yuga's paintbrush staffs ability to transform other beings into paintings. After Yuga Ganon is defeated, the Trident is destroyed along with him.

In Ancient Stone Tablets, he uses it just as he does in A Link to the Past.

In the A Link to the Past comic by Shotaro Ishinomori, Ganon is seen wielding his Trident in the final battle. At first, Ganon's trident easily overpowers Link, and the young hero even gets stuck in between it, rendering him incapable of moving. After Link and Zelda defeat Ganon, Link is seen holding the Trident in his hand as the Triforce asks him to make his wish.

Gannon wields a Trident in Zelda's Adventure. Using this Trident, he is able to summon shock waves of electricity to fight Princess Zelda. 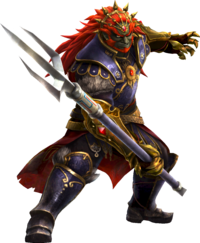 Ganon wields the Trident in Ganon's Fury in Hyrule Warriors. Ganon uses his Trident when activating his Focus Spirit to expose enemies' Weak Point Gauges, as well as when performing a Weak Point Smash.

Yuga can also summon the King of Evil Trident to attack enemies as part of the moveset for his Picture Frame Weapon.

Ganondorf throws his Trident forward, striking the group of enemies directly in front of him and dragging them along. He then hovers, taking altitude while charging a ball of lightning in his hand, which he then throws into the Trident, causing a huge explosion. This attack hits enemies immediately in front of Ganondorf, and also those caught in the explosion.