Kafei is a recurring character in The Legend of Zelda series.[1][name reference missing] He is the runaway son of Mayor Dotour and Madame Aroma and a major character in the game's longest side-quest, Reuniting Kafei and Anju. He is one of the twenty people added to the Bombers' Notebook.

During his youth, Kafei was a member of the Bombers Secret Society of Justice.[2] The owner of the Curiosity Shop states that he was a childhood friend of Kafei's and gave him the Keaton Mask as a gift. Later, Kafei eventually fell in love with Anju when they were children and they became engaged. They promised each other to marry on the day of the Carnival of Time, exchanging the Sun and Moon's Mask during the event.[3] However, several years later, and only a month before the Carnival,[4] Kafei was suddenly turned into a child by the possessed Skull Kid.[5]

On his way to see the Great Fairy in North Clock Town about his desperate situation, Sakon came along and stole his wedding ceremony mask.[6] As such, Kafei could not return to Anju despite knowing that she was worried, for he had promised her to greet her with his wedding mask in hand.[7] He goes into hiding at the Curiosity Shop and disguises himself with a Keaton Mask that the owner gave him when he was a child,[8] secretly watching all of the customers who sell stolen goods. He is positive that the thief will appear and he will be able to follow him to retrieve his mask.[9] Despite Kafei's terrible fate, Anju does not know what has become of him or why he disappeared. She is afraid to meet her fiancé and hear the reason as to why he escaped, for she fears his disappearance might have been caused by her.[10]

Kafei is the son of Mayor Dotour and Madame Aroma,[11] and is engaged to Anju, the inn-keeper of the Stock Pot Inn. Although the two lovers made a promise to exchange their masks and get married on the day of the Carnival of Time,[12][13] a sudden turn of events forces Kafei to run from Anju's side, leaving the inn-keeper without a reason for his immediate departure.

Link can meet Kafei by sneaking to the back of the Curiosity Shop while Kafei is getting the letter from Anju. Kafei explains to the young hero his reasons for his disappearance and why he cannot go and see his fiancée. He then asks Link to deliver his pendant to Anju as proof that is still willing to keep his promise.[14] Once Anju receives the pendant, she will once again believe in Kafei and decides to wait for his return despite everyone else taking refuge in Romani Ranch.[15]

On the night of the Final Day, Link and Kafei team up to enter Sakon's Hideout to retrieve the Sun's Mask. After making their way through the hideout, Kafei recovers the wedding mask and immediately leaves for the Stock Pot Inn to meet up with Anju. With just a few hours left until the Moon falls, Anju waits for Kafei in her room with her Moon's Mask. The two lovers, at last, reunite and exchange their masks and oaths.[16] In return for witnessing this event, they grant Link the Couple's Mask.[17] Even though the Moon is just hours from destroying Termina, they urge Link to take refuge, for they will stay and greet the morning together.[18]

During the ending credits, Anju can be seen outside Clock Town having her wedding ceremony, although Kafei is never seen in the scene. 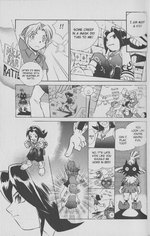 Kafei being transformed by the Skull Kid in the manga

In the Majora's Mask manga by Akira Himekawa, Kafei is first mentioned by Anju's Mother, and later Anju explains his disappearance after nursing Deku Link's injuries. He later makes an appearance as he tries to get into the Stock Pot Inn. Link, thinking Kafei was up to no good, chases Kafei away which causes him to drop a letter addressed to Anju. Link delivers the letter to her, and she decides to wait for Kafei. Link later tracks down Kafei, and interrogates him, thinking he is a minion of the Skull Kid. Kafei explains what happened to him, and asks Link to take him to the Skull Kid. Kafei pleads with the Skull Kid to change him back to an adult, who then fires a blast of energy at Kafei, gravely injuring him. Anju appears and the two embrace as Link enters the final battle with Majora's Mask. After the battle, Kafei changes back into an adult, and he and Anju enjoy their wedding day.

Kafei appears as a Sticker in Super Smash Bros. Brawl.

In Super Smash Bros. Ultimate, Kafei appears as a Spirit with the ability, Mr. Saturn Equipped, which gives a Fighter a Mr. Saturn at the start of a battle.

Terminans in The Legend of Zelda series
Retrieved from "https://zelda.gamepedia.com/index.php?title=Kafei&oldid=823462"
Categories:
Hidden categories: