The Isle of Ruins is an island in the northeastern quadrant of the sea in Phantom Hourglass.[1] 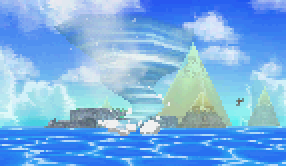 A cyclone bars the way to the isle. It is dispelled with the Regal Necklace

To dock on the Isle of Ruins, Link must dissolve a cyclone by obtaining the Regal Necklace from the Isle of the Dead.[2] Odd in shape, the isle comprises numerous islands interconnecting with walkways, instead of just one piece of land. It is the location of the ancient Cobble Kingdom, and houses three pyramids containing the spirits of ancient knights,[3][4][5] in addition to Mutoh's Temple.[6] The water level can be lowered on this island, revealing more land.[6] Properly exploring the isle might be difficult because of the many land levels. As Link explores the ruins, he must solve various obstacles and puzzles in order to gain entrance to Mutoh's Temple, where the Aquanine lies within.[7][8]

At the entrance of the isle is a cave that must be explored in order to go deeper into most of the entire place. Southwest of the isle is a big maze, where certain stone tablets provide clues for a riddle whose solution opens the way to the aforementioned Mutoh's Temple.[9][10][11] The pyramid of the third Cobble Knight, Bremeur, lies to the northwest. Inside, the island's water level can be lowered by using the King's Key to break the seal on the land.[12] The pyramid of the second Cobble Knight, who is known as Doylan, is to the northeast, and, unlike the other pyramids, it's filled with numerous traps, including lances, rolling rocks, and a hidden hole in the floor, and enemies; but if Link survives them, he will receive the aforementioned King's Key.[13] Finally, the pyramid of the first Cobble Knight, Max, lies to the south, and visiting it allows Link to gain part of the access to Mutoh's Temple.[9]

Southeast of the third knight's pyramid is a cave housing a Spirit Gem.