This article or section is written like a story.

It uses overly elaborate and dramatized wording or has excessive plot elements not immediately relevant to the subject.
To meet Zelda Wiki's quality standards, it must be rewritten in a more encyclopedic manner.

The Imprisoning War is an event taking place before A Link to the Past.[1] It was the first time in the series that Ganon's history was explained. It was later revealed to stem from events that occurred in Ocarina of Time. It was a conflict that ensued after Ganondorf the Demon Thief entered the Sacred Realm, also known as the Golden Land, and laid claim to the Triforce, becoming Ganon, the Demon King. Ganondorf's attainment of the Triforce tainted the Golden Land, transforming it into the Dark World and Ganondorf himself into the beast named Ganon. He launched an invasion against Hyrule with his new army of monsters, made up of people from Hyrule that came seeking the Golden Power for themselves. This invasion was repelled by the Knights of Hyrule, who gave their lives almost to the last to protect the Seven Sages as they cast a seal on the Dark World, trapping Ganon and his army inside and restoring peace to Hyrule.

History from A Link to the Past

The Discovery of the Sacred Realm

Long ago in the land of Hyrule, legends spoke of a great power left behind by the Golden Goddesses following Hyrule's creation. Stories speaking of the Sacred Realm and the omnipotent "Golden Power" known as the Triforce that resided within it spread across Hyrule over the ages, causing a lust for the Triforce's power to grow and fester in the hearts and minds of Hyrule's people until there was nothing left in many of them but pure greed.[2] The Triforce could not judge between good and evil and thus would merely grant the wishes of its holder.[3]

One day, a gateway to the Golden Land of the Triforce was accidentally discovered and opened by a band of thieves skilled in dark magic and their leader, a man named Ganondorf. It was a place like no other, a realm of midday golden skies rather than blue. And there, shining down upon this world from above, was the Triforce in all its glory. A long running battle then ensued between Ganondorf and his followers to the heart of the Sacred Realm in a race to reach the Triforce first. Ganondorf fought his way past and killed all of his followers that had accompanied him into the realm along the way so that he could claim it uncontested.[4]

Ganon's Wish on the Triforce

After the murders of his followers, Ganondorf stood over the Triforce and grasped it with blood-stained hands. A voice whispered to him, stating that if he had a strong desire in his heart to wish for it. In response, Ganondorf's laughter echoed across time and space and reached even Hyrule itself as he made a wish that he become the ruler of the world.[5]

Thus, one of Hyrule's greatest threats was born: the King of Evil, Ganon, who now had the strength of the Triforce at his command.[6]

The Creation of the Dark World 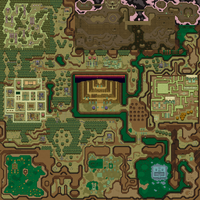 As a result of Ganondorf's wish for the domination of the world, the Triforce caused the Sacred Realm to radically change. It began to wither and die as it was transformed into a twisted copy of Hyrule that represented what Hyrule would look like if Ganondorf ruled it.[7] Dark clouds now permanently blackened the skies. As a side-effect of this transformation, the Triforce's magic was used to cast a curse over the entire realm, one that would cause any without protection from it to transform into a shape that would reflect what is in his or her heart.[8] The Golden Land was now the Dark World, a place of darkness and evil.

Ganon was not satisfied merely with ruling the newly-transformed Dark World however, as he sought to return to Hyrule and conquer it as well. In time, evil power began to issue forth from the portal to the Golden Land, beckoning to men from the outside to seek out the Golden Power and have their wishes become reality through its magic.[9][10]

The Invasion of Hyrule

The Knights of Hyrule battle Ganon's army for the fate of Hyrule.

As greedy men from Hyrule entered the Dark World hungry for the Golden Power, each of them was transformed into a monster reflecting the greed within them. As a result, Ganon's army of monsters grew to a large enough proportion that he was now capable of launching an invasion against Hyrule. Many plagues began to beset Hyrule as well, causing catastrophes for the people that would precede the coming storm.[11]

Finally, with his army now ready, Ganon launched the invasion against Hyrule, intending to fulfill his wish to be the ruler of both the Dark World and the Light World. Ganon's army swarmed from the Dark World and flooded into Hyrule, causing mass chaos and attacking Hyrule Castle.[12] Meanwhile, the Seven Sages searched for a courageous individual that could take up a weapon that had been crafted to combat magic as powerful as that of the Triforce's, a sword that could banish evil itself, the Master Sword. However, no hero worthy of the blade could be found.[13]

The Seal of the Sages

The King of Hyrule eventually convened the council of the Seven Sages as well as the Knights of Hyrule that served to protect the Hylian royalty and commanded them to seal the gateway to the Dark World shut in order to stem Ganon's invasion of the kingdom. Both groups would play pivotal roles in the hope of reaching this goal, with the Seven Sages bearing the responsibility of creating the seal itself while the Knights of Hyrule would protect them as they did their part to halt Ganon's invasion of the kingdom.[14]

The Knights of Hyrule took the full brunt of the attack from Ganon's monsters, and while they fought courageously to the end, they were nearly wiped out entirely as they did their duty.[15][16] Their lives were not lost in vain however, as they bought the necessary time for the Seven Sages to create their seal, trapping Ganon in the Dark World and halting the invasion. With this, the war was ended in a victory for the Light World, though it had come at a very high cost. The people of Hyrule rejoiced nonetheless at the restoration of order and peace to their kingdom, thanks to the efforts of the Seven Sages and the Knights of Hyrule. Ganon and his army were trapped in the Dark World until the events of A Link to the Past.

Due to the cost of resources and lives in the fight over the Sacred Realm, the Imprisoning War left Hyrule impoverished.[17]