Hyrule Castle Town,(TP)[1] also known as Hyrule Castle Town Market,(OoT)[2] Market,(OoT)[3] Hyrule Town,(TMC)[4], Town of Hyrule,(TMC)[5] and Castle Town,(ST)[6] is the capital of Hyrule located directly in front of Hyrule Castle. It is usually the main hub and center of activity in the Kingdom where Hyruleans come to engage in business and trade goods. The Town is considered to be one of the liveliest towns in Hyrule.[7][8] The population consists mostly of Hylians, but as seen in Twilight Princess, Gorons commonly occupy the streets in hopes of selling their wares.[9] In all the games in which it appears, Hyrule Castle Town is home to a wide variety of shops, side quests, and mini-games.

As a means of protection, the Town is usually surrounded by a moat that is only accessible via bridges or drawbridges. Throughout the Zelda series, Castle Town has been prone to conflict multiple times and has been the subject of invasion more than once. 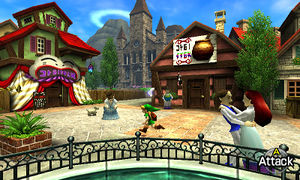 The Market in Ocarina of Time 3D

In Ocarina of Time, Castle Town Market is located in the northernmost section of Hyrule, directly in front of Hyrule Castle. The entrance to the Castle Town is surrounded by a moat whose source floats from Zora's River, and the only way to get across it is by using a drawbridge; however, since monsters roam the field at night, the bridge is only lowered during the daytime in order to protect the townsfolk.

Directly inside the gates of the town is the Guard House, which is a small building filled with jars. Further in is the main area of the Castle Town, a rather happy-go-lucky, yet surprisingly small community. All throughout the day and night, the Castle Town Market is home to various stores and outlets where Hyruleans from all over come for shopping and entertainment. It hosts a wide variety of shops, including the Bazaar, the Happy Mask Shop, and the Medicine Shop. Moreover, businesses that focus in the entertainment area can be found, consisting of the Bombchu Bowling Alley and the Shooting Gallery. While all of the previously mentioned shops and businesses are only open during the day, there are also other locales that are open exclusively during the nighttime such as the Bombchu Shop and the Treasure Chest Shop.

During the night, the Market becomes a quiet, calm town, as most of the citizens have departed by now. Furthermore, packs of dogs roam all over the now-empty town, and they will follow Link if he gets close enough to one of them.[10]

The smaller, less austere version of the Town serves as the home of the Temple of Time, a large structure that functions as the resting place of the Master Sword. The Temple of Time is located in the northeastern portion of Castle Town in a more secluded area, far from all of the bustling and noises that surround the Market.

However, when Link returns seven years later after retrieving the Master Sword from its pedestal, he is shocked to find the town completely in ruins as a result of Ganondorf's invasion. Most of its citizens managed to escape to Kakariko Village, leaving the town to be invaded by hordes of ReDeads. Due to this, Link can no longer enter any of the previously inhabited locales of the Market. Directly outside of town, the drawbridge has been destroyed by Ganondorf, allowing the city to be accessed by Link during the day as well as the night. However, because of this, the monsters outside of town were able to cross the rubble of the bridge and gain access to the town as well. 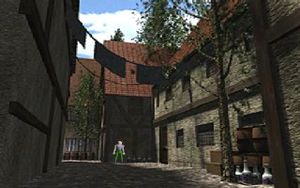 An area known as the Back Alley is also situated within the Castle Town, and it is considerably less crowded and quieter than its market counterpart mostly due to the fact that this is where most of the Town citizens live. Few people roam these streets, so Link can usually only find one or two people dawdling in the Alley at any given hour. The young hero can only enter through three doors in the Back Alley, two of which are residents' homes and the other being the Bombchu Shop.

After obtaining all of the three Spiritual Stones and retrieving the Ocarina of Time from the moat near the Castle Town entrance, Link can go to the Back Alley to witness a dying soldier in the east area of the Alley. If the young hero speaks to him, he will tell Link about Ganondorf's betrayal of the King as well as Princess Zelda's escape from the Castle. He then urges Link to go to the Temple of Time before taking his final breath and dying. If Link tries to speak to him again, Navi will mention that he's not moving anymore.[11][12]

Once Link becomes an adult, the Back Alley becomes inaccessible due to its entrances being blocked off by rubble. 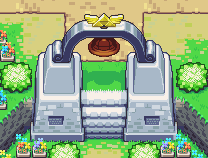 The Triforce above the bell in Hyrule Town

In The Minish Cap, the Town is named Hyrule Town and is located in the middle of Hyrule, just south of Hyrule Castle. Unlike the other games, there are no other Hylian settlements, and most important buildings can as such be found in Hyrule Town. The Town contains residential houses, a Shop, a Library, a School, a Bakery, a Cafe, an Inn, a Post Office, a Figurine Gallery, and several mini-games. The center square of the Town is predominately the settlement's market place, featuring a few stalls run by merchants and several shop buildings around the area. Merchants come to this square to sell their wares, which eventually includes Beedle, who sells Picolyte, and a Goron Merchant, who sells Kinstone Pieces.

The mayor of Hyrule Town is Mayor Hagen. Most of the townsfolk are more than happy to fuse Kinstone Pieces with Link; some of them being Marshall, Keeley, Anton, June, Sheila, and Dottie.

There are six Hylians that can be found in Hyrule Town whose names do not appear in-game, though six unassigned names appear in the game's files, presumably intended for these six characters. These six names are Edmond, Guts, Joe, Martin, Match, and Monty. They all appear alongside other characters in Figurines: one appears in the bottom-right corner of the Spookter & Spekter Figurine, one appears in the top-left corner of the Mama's Cafe Figurine next to Mama, and the other four appear in the Peaceful Hyrule 3 Figurine. 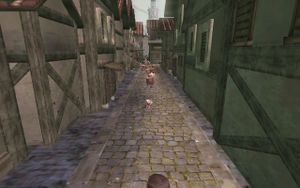 In Twilight Princess, Hyrule Castle Town is much larger than in previous incarnations, being about three times larger than Ocarina of Time's. It is divided into four sections: the West Road, East Road, South Road, and the Central Square. As with previous appearances, the Castle Town is located within the same vicinity as Hyrule Castle, whose entrance lies north of the Central Square. The Castle Town is situated in the center of the Lanayru Province, and becomes covered in Twilight when the province falls to it.

Hyrule Castle Town becomes an important location throughout Link's quest that is revisited often, with Telma's Bar being the most notable, as this is where Link first reunites with Ilia and meets Telma and The Resistance, who both help him with retrieving Ilia's memory and finding the Mirror of Twilight's broken Shards. 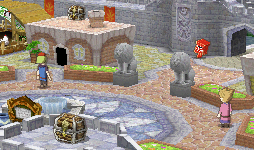 Castle Town as it appears in Spirit Tracks

In Spirit Tracks, New Hyrule has a Castle Town that is located in front of the Hyrule Castle grounds and also houses a water fountain at the center, much like its predecessor. The Castle Town is very small in appearance, housing only a few buildings and people. It most notably features the Castle Town Shop, which has a different design from other shops, and an endurance level known as Take 'Em All On! Unlike in previous games, the town is not obligatorily revisited often, and as such, not much occurs there. However, a woman there will give Link a Force Gem that will extend the Tracks in the Forest Realm in return for giving her the Fish purchased from Papuchia Village. A man here will also sell 5 Cuccos to Link for 50 Rupees, which can be transported by train to receive more Force Gems elsewhere.

A Stamp Station can be found here as well.

Hyrule Castle Town before its destruction from Breath of the Wild

In Breath of the Wild, Hyrule Castle Town stands in front of Hyrule Castle, where the Calamity Ganon is imprisoned. Before the Great Calamity, the town was Hyrule's massive capital filled with many homes.

The Hyrule Castle Town Ruins from Breath of the Wild

The town was completely destroyed, infested with Guardians and pools of Malice. There are a few shrines in the area, a few Korok seeds that can be collected, and a few treasures submerged in pools of water. To the north of the town is a gateway to the castle. Before it was destroyed, the Castle Town was a lively marketplace built between dozens of blue-roofed buildings which also likely housed many Hylian citizens.

In Link's Crossbow Training Hyrule Castle Town appears in the backdrop of Level 3 which focuses on aerial targets. The Fruit Balloons from the Fruit Pop Flight Challenge reappear with the same ranking system for the scoring. Watermelons are the largest, and worth the least; oranges are medium in both size and score; and strawberries are the smallest and highest-scoring. An occasional meteor can be seen streaking across the night sky, and shooting it yields 300 points.

Towns in The Legend of Zelda series
Retrieved from "https://zelda.gamepedia.com/index.php?title=Hyrule_Castle_Town&oldid=807039"
Categories:
Hidden categories: