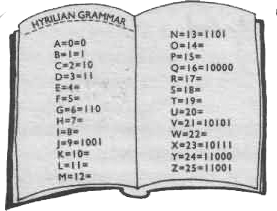 A book explaining how the Hyrilian Grammar works

The Hyrilian Grammar is a code mentioned in The Shadow Prince.[1] It is first introduced after the King of Hyrule says he wishes to show the Triforce of Wisdom to Charles.[2] Outraged by the king's decision, Link turns to Impa, who tells him to not act rashly and to think this through.[3] To help him make the decision on what he should, Impa hands the young hero a piece of paper that contains a one-word message written in the ancient number-letter code.[4]

According to the book, the Hyrulian Grammar works as follows: each letter of the alphabet has a number that matches it. A=0, B=1, and so forth; however, in old Hyrule, the number system was in base 2, or binary. Thus, each of the numbers in the message are the base 2 numbers that match the Hyrulian alphabet:

The message that Link must decipher contains the following numbers:

When translated, it advises Link to "FORESTALL," meaning to wait. Whether Link decides to forestall or act forthwith does not greatly affect the outcome of the book.