The Hylian Loach,(TP)[1] also known as the Hyrule Loach,(OoT),[2] is a recurring Fish in The Legend of Zelda series. It is a fish similar to a bowfin with ornate swirl patterns down the length of its body. Due to its rarity, the Hylian Loach is usually revered as a legendary fish.[1] 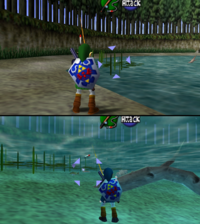 In Ocarina of Time, the Hyrule Loach appears at the Fishing Pond in Lake Hylia. It can be found as both child and adult Link, though the size will vary. As a child, the Loach will weigh between 15 and 18 pounds, and as an adult, its weight varies between 29 and 35 pounds.

The Hyrule Loach appears regardless of whether Link has obtained the Golden Scale or not. Upon entering, the Loach will always be situated at the Lily Pads to the west of the pond. A second Loach can be found on the east Lily Pads as well, but only as child Link. The Loach appears on the fourth time that Link consecutively enters the pond and pays the fishing fee of 20 Rupees. Link must repeat the process of paying 20 Rupees, quitting, and exiting the pond three times consecutively in order for the Loach to appear in the Lily Pads during the fourth time that he goes back in to the pond. This is also true even when the game is saved and restarted. If the fee was paid twice before saving and restarting the game, then Link only has to pay the 20 Rupees one more time to get the legendary fish to appear on his fourth visit. The Loach will appear on the fourth visit to the pond whether Link has paid the fee or not only if the previous conditions have been met. If Link goes in and out of the pond for the first two times and only pays on the third time, the Loach will not appear on the fourth visit to the Fishing Pond.

Once the Hyrule Loach appears, it will remain there even if Link exits and re-enters the pond, so long as he does not pay a fourth time. After paying, exiting the pond will cause the Loach to disappear and for the count to reset back to zero.

Like any other fish in the pond, if Link gets too close to the Hyrule Loach while it is in the Lily Pads, it will swim away to the middle of the pond, although its sight range is wider than that of other fish in the pond. While there, the Loach stays at the bottom of the pond and only comes up to the surface for air approximately every 75 seconds, except for the first time. If Link disturbs the Loach when it is in the Lily Pads and scares it to the middle, the Loach will swim up for air for the first time after 4 or 5 minutes of not being disturbed, then reverting back to the usual 75-seconds of going up for air. Every time it is about to start swimming up to the surface, the Loach will turn around and swim the opposite direction that it was facing when it was not moving. When the Hylian Loach reaches the surface, it will make a "thap" sound. This signals the moment that the Loach can be targeted by Navi, who will continue to target it until the Loach reaches the bottom of the pond again. The Loach can also always be targeted when it is in the Lily Pads.

After the Hyrule Loach has gone up for air for the seventh time without being disturbed (approximately 15 minutes), it will eventually swim back to the west Lily Pads. The Loach can once again be targeted as it is swimming back to its original position; however, if Link gets too close to it, the Loach will stop swimming to the Lily Pads and return to the middle of the pond.

Like the rest of the fish, the Hyrule Loach will swim after the smaller fish in the pond during sunset or at dawn while it is in the Lily Pads; however, it does not do this when it is somewhere in the middle of the pond. Once the frenzy is over, the Loach will return to its original position.

Once Link catches the Hyrule Loach and takes it to the Fishing Hole Man, he will tell Link that the fish population's number has decreased and releases it instead of keeping it in the fish tank.[3] He will also give the hero a reward of 50 Rupees.

Hylian Loaches can be found around the Lily Pads at Hena's Fishing Hole in Summer in Twilight Princess. They can only be reeled in by using the Frog Lure or the Sinking Lure. Young Hylian Loaches can also be caught in various places, including Hena's Fishing Hole, by using the Fishing Rod while Bobber Fishing. Despite Hylian Loaches being more common than they were in Ocarina of Time, they are still legendary, as Hena is remarkably impressed when Link catches one.[4]

A book called The Legend of the Hylian Loach: Twilight Fish can be found in Hena's fishing hut.[5] It gives a description of the behavior and habitat of the Loach, mentioning that they prefer the shallow waters and love frogs. Moreover, the book explains that they are known to be antsy and prefer the summertime over wintertime.[6] According to Hena, the book is about a young Hylian Loach and its quest to save Hyrule.[7]

As it is explained in the book, the Loach can only be found when the season in the Fishing Hole is summer. At this season, Lily Pads will appear towards the north of the pond, which is where the Hylian Loach can be located. Their love for frogs makes them easy to catch with the Frog Lure. However, due to the nature of the Frog Lure and the Sinking Lure, the Loach must nibble on the lure for a bit before Link tries to hook it; otherwise, the fish will escape.[8]

A picture of the Fishing Hole Man from Ocarina of Time holding a Hylian Loach can also be found inside Hena's hut.[9]