Not to be confused with the Royal Crest.

The Hylian Crest[1] is a recurring symbol in The Legend of Zelda series.[name reference needed] It is the mark of the Goddess Hylia and a crest of the Royal Family of Hyrule.[2][3] The Hylian Crest is commonly used on Hylian weapons, armour, and architecture; most notably it appears on the Hylian Shield, where it represents the Crimson Loftwing that was ridden by the hero during the Sky Era.[2] It is similar to the Wingcrest of the Hyrulean Royal Family, both being derived from the Goddess Crest used in the ancient Era of Hylia.

A winged figure on the Red Shield

Depictions of avian figures similar to the Hylian Crest appeared in A Link to the Past, where artwork of the Fighter's Shield and Red Shield both show a stylized bird below the Triforce. Another winged figure is shown above the doorway of the Sanctuary.

The Hylian Shield as it appears in Ocarina of Time, with a Hylian Crest in red

The current design of the Hylian Crest first appears in Ocarina of Time, shown in multiple locations within the game. The Hylian Shield of the Knights of Hyrule has the Crest with the Triforce above it and an inverted triangle below it.[2] The clothing and jewelry worn by Princess Zelda has designs including the Hylian Crest with other symbols such as the Triforce and the Crest of the Sheikah.[4]

In The Wind Waker the Hylian Crest can be seen in the background of a painting in Hyrule Castle.

Within Twilight Princess, the Hylian Crest is displayed on the Hylian Shield, on Zelda's dress, and on suits of armour in Hyrule Castle.

In Spirit Tracks, when Princess Zelda's spirit assumes control of a Phantom, a glowing pink Hylian Crest appears on its back.

In A Link Between Worlds the Crest is shown on the Hylian Shield.[2] 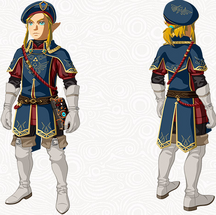 The Hylian Crest is in many locations in Breath of the Wild. It is displayed throughout Hyrule Castle on banners, in sculptures, on the floor of the Sanctum, among other locations.[5] The Crest is displayed on Weapons, Shields, and Armor used by Hyrule's Military, such as the Hylian Shield, Royal Guard's Series, Royal Guard Set, the Soldier's Set, and the Knight's Shield.[6]