Please improve it as you see fit. Editing help is available.
This article has been flagged since March 2013.

Hylia's chosen hero is a character who appeared in the era shortly after the creation of the world by the Golden Goddesses, thousands of years prior to the events of Skyward Sword.[1] Although only briefly mentioned in the game, Hylia's chosen hero plays a significant role in the Skyward Sword manga by Akira Himekawa, where he is depicted as the earliest incarnation of Link. This has not been confirmed canonically. In the manga, the Goddess's Hero is clothed in Link's signature green garb, as well as a red cape and golden pauldrons. He is also depicted to be in his adult age rather than being a late teen.

Little is known about the chosen hero's backstory except that he used to live on the Surface during the Era of the Goddess Hylia. According to the legends, Hylia made him her chosen hero and gave her blessed Sailcloth to him.[1]

Eventually, the successor of the chosen hero was prophesied by his chooser, who was destined to fulfill his destiny as the goddess's second hero. Hylia created Fi, the spirit that resides in the Goddess Sword, and gave her the purpose of assisting the Hero's successor throughout his journey.[2] Thousands of years later, the Hero's successor turned out to be Link from Skyloft.

Those who came after the chosen hero of the Goddess Hylia and his successor, Link, would be chosen to protect the Goddess Hylia's mortal descendants and protect the land of Hyrule from evil.[3][4][5][6] As both of them are known to be the Goddess's chosen knights, most incarnations of Hylia's chosen hero will carry the bloodline of the Knights of Hyrule who protects the Royal Family of Hyrule,[7][8] and therefore inherit the hero's spirit and courage.[9] Future descendants of the chosen hero born into his knightly bloodline would be named after him for generations.[10]

In the Skyward Sword manga by Akira Himekawa, Hylia's chosen hero is an incarnation of Link. He lives in a city in the world below the clouds known as the Land of Hylia.[11] 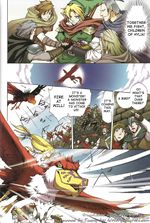 The Children of Hylia join forces. 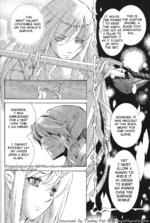 Hylia allows her chosen hero to wield the Master Sword

Link becomes a knight of the land of Hylia, respected by the Hylian citizens and regarded as a hero. However, the hero is imprisoned for four years after his sword is broken, and he is deceived by Lord Dagianis, who is killed four years later by Demise. After his death, the people attempt to free the Knight of Hylia from his prison. They realize that he is the only one capable of saving the land from Demise's army of monsters, however Link has been weakened after four years.[12][13] Still believing the hero will save them, they give him his repaired sword and his clothes, and freed him from his prison.[14][15] The Knight of Hylia, Link, appears atop the castle, facing a crowd cheering for him. Gazing at the sky, he says to himself that he will fight for the Goddess Hylia forever as long as she needs him.[16]

The Goddess and her Hero reunited

Ready to fight with his allies against Demise and his army, the Goddess Hylia suddenly appears in person, riding on an old Loftwing. The articulate Loftwing expresses his low opinion of the Hylians, saying that they are useless and didn't know the differences of deities and monsters. He could not believe that the hero who would ride him and face Demise could be among the people of the Surface.[17][18] Link reveals himself as the Knight of Hylia and the hero whom they sought. He claims that, although humans may seem small in the eyes of the gods, there are those among them who possess great courage.[19][20] The old Crimson Loftwing gains interest in Link, and orders him to show him how worthy he truly is while he departs.[21] Meanwhile, the Goddess Hylia, sensing the Demon King's upcoming arrival to the Surface, convince to her people to escape to the sky with the Loftwing guiding them there.[22] Hylia acknowledges her knight's unmatched valiance and honor and proclaims him again her chosen hero. She then allows him to wield her legendary weapon brought by the gods, the Master Sword.[23] However, Link sorrowfully claims that he could not touch a holy sword, thinking that he is impure because he was imprisoned for years.[24] Despite this, Hylia says that the Master Sword will decide whether he is impure or not, and asks him for his choice; to seek revenge on the surface's people who imprisoned him or to save the world from its terrible fate.[25][26] Hylia's chosen hero decides that he will always stand with his friends and accepts the Master Sword from the goddess.[27]

In order for the hero to wield the Master Sword, Link has broken the blade and reforged it. When suddenly, Demise eventually came with his army of monsters.[28]

The Battle Against Demise 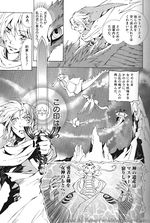 Hylia's chosen hero with the three legendary dragons giving him their blessing.

The war had already begun, the Goddess Hylia and her chosen hero's army had been fighting Demise and his army of monsters for a week.[29][30] The world's tribes supports Link and the Hylians on the war, fighting the demons, and the hero is facing Demise on his own.[31] Unfortunately, Demise was unbeatable and the hero is critically wounded by the Demon King by one hit.[32][33] As he was about to pass on, the Goddess's Loftwing allows him to ride on his back and fight together. The hero asks for the Loftwing's guidance to show his people to the skies, to which the Loftwing agrees to as long as the hero continues to fly with him.[34][35] At that moment, the three legendary dragons, Faron, Eldin, and Lanayru, appear, offering their blessing to the Hero's Master Sword.[36] They reveal the legacy of the gods dwells within the Master Sword.[37] The hero gives the holy blade to the Goddess, so she can send the Hylian people and their kingdom to the skies with a single sweep of the Master Sword.[38][39] The Goddess sends it back to the hero and makes the Master Sword a pillar between heaven and earth.[40] Hylia's chosen hero, who is gravelly injured, stays behind and watches the land floating through the skies before passing away.[41][42] Meanwhile, Demise could not find where the legacy of the gods is, which was revealed to be in fact the Triforce, however the Goddess Hylia eventually seals Demise.[43][44][45] Finished with the Demon King, she returns to see her hero, who has already passed away. Crying, she reveals that the imprisonment was planned from the start so her chosen hero would be strong enough to save the world.[46][47] Hylia decides that she will be reborn with her hero and live with him as a normal person, casting off her title and ensuring that his heroic spirit will live on forever.[48][49]

Thousands of years later after Hylia's chosen hero and the Goddess save the world,[50] the hero's reincarnation, Link, goes outside and encounters the Crimson Loftwing, who is actually the reincarnation of the Goddess's Loftwing. The bird's eyes tells a message to Goddess's hero's spirit, which resides within his successor. Young Link then seems to understand the Loftwing who chose him to be his rider.[51][52][53]