Hookshots (pronounced /ˈhʊkˌʃɒt/ HUUK-shot)[1],(ALttP | LA | LADX | OoT | OoT3D | MM | MM3D | TWW | TWWHD | ALBW | SSB | HW | CoH)[2][3][name reference needed], also known as Hook Shots,(ALttP | LA)[4][5][note 1] are recurring Items in The Legend of Zelda series. They are machines consisting of a chain and hook. When used, the chains extend and send the hook attached towards their targets. If the hooks latch onto certain objects, Link is projected towards those objects. Link can also use them to pull enemies and objects towards him.

In nearly all games, the Hookshot is almost always found inside dungeons. A recurring trend in the series is that the Hookshot is typically found inside water-themed or flooded dungeons, such as the Swamp Palace in A Link to the Past, or Catfish's Maw in Link's Awakening. The Hookshot is usually guarded by the dungeon's mini-boss and often becomes necessary to navigate the remainder of these dungeons it is found in. It is also often required to defeat the dungeons' bosses. 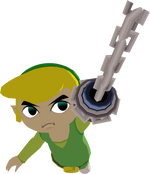 The Hookshot is used most commonly to grapple onto far away objects so that Link can reach previously inaccessible areas. In addition, the Hookshot can also be used as a replacement for the Boomerang by allowing Link to grab far away objects (like hard to reach Rupees or out of reach switches) and attack enemies. In most cases, attacking an enemy with the Hookshot will only stun them, but some weaker enemies such as Keese will be defeated when hit with the Hookshot. Other enemies, such as Like Likes, will instead pull Link towards them when hit by the Hookshot, which can potentially hurt Link or threaten his other items.

In 2D Zelda games, the Hookshot will latch onto specific solid objects that stand in any of the four cardinal directions and can include blocks, chests, specific stones, or pots. It is often used to pull Link over pits and unsafe hazards. In the 3D console games, the 3D environment makes greater use of the Hookshot as it can also be used to reach higher or lower heights. In these games, objects that can be grappled onto are usually marked with a bulls-eye target. In Ocarina of Time, the Hookshot also produces a laser light used for aiming the Hookshot. In Ocarina of Time 3D, the laser dot is surrounded by an extra red ring when the Hookshot is pointed at a viable object. In said game, the Hookshot can also be aimed by moving the Nintendo 3DS.

The Hookshot, once acquired, opens up all sorts of new areas for you to explore, both in dungeons and, primarily, in the Dark World. With the Hookshot, Link can grapple onto all sorts of objects to pull him over water, chasms, et cetera. These objects include all sorts of pots and jars, and treasure chests as well. In addition, the Hookshot can be used a lot like a Boomerang or Magical Boomerang, because it doesn't hurt the enemies you strike it with, but it stuns them just like the Boomerang or Magical Boomerang do. However, it doesn't have the speed or accuracy of the Boomerangs, so I'd use it simply for its primary purpose, which is to grapple.

The Hookshot is found in Dampé's grave in Ocarina of Time after besting Dampé the first time in a race as an adult.

An upgraded version of the Hookshot, known as the Longshot, can be found in the Water Temple. The Longshot has a much longer reach than the regular Hookshot.

The Hookshot is found in the Pirates' Fortress in Majora's Mask.

The Hookshot is found in the Wind Temple in The Wind Waker.

The Hookshot can be used to grapple onto switches as well as wooden walls, which Link can then quickly merge with.

See SmashWiki's article on the Hookshot for more information

The Hookshot also appears as a Sticker in Super Smash Bros. Brawl.

In Hyrule Warriors, the Hookshot appears as an item obtained in the "The Shadow King" Scenario. The Hookshot is used to grapple onto ledges, indicated by a bulls eye target overhead and a glowing space when the Hookshot is selected. It can also be used to grapple onto enemies and quickly move towards them, sometimes also while performing an attack on certain enemies in some instances, such as on Aeralfos when it is in flight. The Hookshot can temporarily be upgraded by finding a item upgrade power-up in battles, which increases its strength for its duration. In this state it can also be used to pull and crash a tiny Moon onto enemies. Its duration can be increased by crafting Whip Badges. The Hookshot is also used to pull down and stun Argorok when its tail glows blue, as well as weaken a part of Ganon when his tail glows.

In Adventure Mode, the Hookshot is also an Item Card that allows to unlock a new area of the map upon completion.

The Hookshot appears as a key item that can assist Cadence, Link, Yves, and Zelda in reaching areas that would otherwise be out of reach to them, along with stunning and knocking back enemies.[7] It can later be upgraded to the Longshot.