The Legend of Zelda (Valiant Comics)/Issue 1

From Zelda Wiki, the Zelda encyclopedia
< The Legend of Zelda (Valiant Comics)(Redirected from He Also Serves)
Jump to: navigation, search
Non-Canon Information

The Legend of Zelda comics by Valiant Comics Issue #1 was originally released in February 1990.

The story opens with Impa sharing a prophecy from the Triforce of Wisdom, telling of how Ganon will defeat Link,[1] conquer the North Castle,[2] and enslave the people of Hyrule[3] if Link steps foot outside of the castle.[4] This news upsets Link, as he wants to go with Princess Zelda as she goes on a journey to visit some of the northern villages.[5] However, he promises that he will remain at the castle.[6]

As Link is practicing his sword fighting skills, he is approached by Miff, his fairy companion. Miff grows upset when she finds that Link let Zelda go off alone,[7] and decides to use her magic to view Zelda's progress. When she looks into the fountain, she sees that Ganon and his minions have captured the princess' party.[8] While this greatly disturbs Link, he knows that he cannot leave the castle, and he sends Captain Krin and his men off to rescue the party.[9] 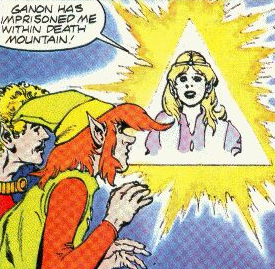 Later, a wounded Krin returns, claiming that he and his men were ambushed by monsters,[10] and that he is the only survivor.[11] He tells Link that Rauru Town has been burned,[12] and that only one who can save he princess is Link. Once again, though, Link refuses to break his promise.[13] In anger, Krin strikes Link, calling him a coward.[14] At that moment, a magic signal appears, with a message from Zelda, calling for Link to come to her aid.[15] Before Link can respond, the message cuts out.[16] As Link once more refuses to leave the castle, Krin tells him that he has let her down,[17] and leaves the castle, presumably to find the princess.

Shortly after, guard stationed on the castle wall tells Link that there is a woman outside of the gate.[18] When the gate is opened, Link finds Impa, who tells him that Ganon has once again placed the Spell of Eternal Sleep on Zelda,[19] and she will never again wake up if he is unable to find her by midnight.[20] Link confronts her about her earlier prophecy, and she tells him that even she is sometimes wrong.[21] As Link remembers that it was the Triforce's prophecy, and not Impa's, he pulls out his blade and strikes down the impostor, who vanishes in a puff of smoke. Link then walks outside of the gate, and orders Watchman Erol not to open the gate for anyone.[22]

Nearby, Ganon removes his Impa disguise, saying that it worked no better than the rest. As several of Ganon's henchmen wait behind some bushes, Link appears outside of the castle gate, and orders Erol to open the door. Erol starts to protest,[23] but then gives in. As Link walks into the castle, he begins to chuckle. Suddenly, another Link appears, and asks Erol who came in.[24] Erol is baffled, but they then realize what has happened. Link uses his sword to shoot a beam at the disguised Ganon, who then disappears.

The story is concluded by Zelda, Impa, Captain Krin and his men returning unharmed. After Link explains the story, he asks Zelda for a kiss as a reward, but she declines him.[25]

The story opens with Link wrestling away from Captain Krin and his men, who are attempting to keep him from reaching the King of Hyrule. When the King realizes what's happening, he chastises Krin,[26] and allows Link to speak with him. Link explains that he is upset because after going on a journey, he returns to Hyrule to find that Zelda and the Triforce of Wisdom are missing,[27] and no one will tell him why.[28] The king explains to Link that Zelda has taken the Triforce, and is going to leave Hyrule forever,[29] as she believes that's the only way to keep Ganon from obtaining it.[30] Link is also told that Ganon's followers know of her plan and are pursuing the princess.[31] Upon hearing this, Link set's out to find Zelda,[32] and takes along a compass that will direct him to the Triforce.[33]

Zelda is riding away from Hyrule of her horse, Storm, while being pursued by a group of Daira. She is thrown from her horse when a Deeler spooks it.[34] As the Daria surround her attempting to take the Triforce,[35] Link charges in, attacking the creatures. While he is fighting, Zelda attempts to run off, but Link quickly catches up.[36] However, he is unable to convince her to stay, and reluctantly agrees to help her escape.[37] Her plan is to use the magic flute found within the Fifth Palace[38] on the Island of Hyron.[39]

Link and Zelda travel to the town of Mido[40] to stock up on supplies before continuing their journey.[41] They trek through a swamp,[42] numerous caverns,[43] and spend several days in the desert[44] before ending up in a city of tombs.[45] They then cross the sea,[46] where they are attacked by a Zora. Finally, they reach the Fifth Palace,[47] where they are confronted by an Iron Knuckle.[48] After a grueling battle, Link defeats his foe, knocking its helmet off. It turns out that it is a human, and not a monster under the armor. The man explains that an old king charged him with protecting the treasures within the palace,[49] and that he was to stop anyone who was unworthy.[50] He tells the duo that by defeating him, they are free to take what they want.[51]

The knight shows Link and Zelda a secret wall, and Link enters in to obtain the magic flute. However, when he sees it, he is tempted to destroy it and lie to Zelda,[52] which would force her to stay forever.[53] Link makes the decision to give the flute to Zelda, but as he says his goodbyes,[54] Zelda confesses to him that wherever he is, is the safest place to be.[55] Link then inquires if it is safe enough for a kiss,[56] but she responds to him that no place is that safe.[57]

The first bonus, rather than a story, was a two-page map of Hyrule. This rendition shows the relative alignment of both overworlds from The Legend of Zelda on southern half and The Adventure of Link on the northern half, with many locations labeled, some supplemented from the comics.

The second bonus story was a prologue, which covers how Link first came to Hyrule, met Impa, and fought Ganon.

In the original 1990 run, the chapters included in this volume were Missing in Action and Trust Me. [58]