"Having a Ball" is the twenty-second episode of Captain N: The Game Master. It was first broadcast in the United States on December 1, 1990. 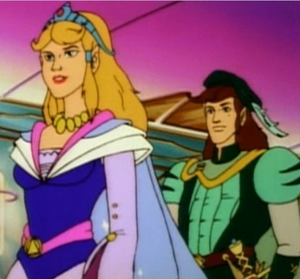 Princess Zelda and Link arrive to the royal ball

It is midnight in the kingdom of Hyrule, and while everyone is asleep, King Hippo and Eggplant Wizard sneak into the chamber where the Triforce is kept. Although they try to steal the sacred relic by using a spell that Mother Brain had given them,[1] King Hippo forgets the words and causes the alarm system to go off all around North Castle. The minions manage to escape by the time Princess Zelda arrives to the scene to permanently turn off the alarm, saying that she refuses to get up again for an alarm "malfunction."[2] She charges Link with the task of organizing the soldiers to guard the Triforce for the night.[3] Mother Brain, hearing the news about Zelda turning off the alarm, decides it's the perfect opportunity to take the Triforce for herself and thus conquer Videoland, but fires Eggplant Wizard and Hippo King for their failures.[4] Humiliated, King Hippo and Eggplant Wizard begin to pack up their things and decide that they will join the N Team.[5]

Meanwhile, at the Palace of Power, Princess Lana decides to host a royal ball and, after she sees Eggplant Wizard and King Hippo walk by in musician costumes, she decides to hire them to play at her party.[6] The two minions then find out that since both Princess Zelda and Link will be at the royal ball, they will leave North Castle unattended, thus giving them a chance to steal the Triforce for themselves.[7] Later on, when Princess Zelda and Link arrive at the ball, the hippo and the eggplant decide it's time to leave to the castle to go forward with their plan.[8] They manage to take the Triforce of Power and the Triforce of Courage before Mother Brain arrives, but leave the Triforce of Wisdom in the middle of the room.[9] Back at the party, Princess Zelda's energy begins to wane and she momentarily faints. Link explains that since there is a magic bond between the princess and the Triforce, she knows that something bad happened to the sacred relic.[10] Should the Triforce be destroyed, Zelda could die.[11] In Hyrule, King Hippo uses the Triforce of Power's might to knock Mother Brain out of the castle.