Hammers, also known as Magic Hammers(ALttP | FSA | TFH)[1][2] are recurring Items in The Legend of Zelda series.[3] [name reference needed] They can be used to press Switches, destroy certain obstacles such as Boulders, or be used as a weapon.

The Hammer is found within the Death Mountain region of western Hyrule in The Adventure of Link. It is used to smash large Boulders that are occasionally found in Hyrule's overworld, often unblocking pathways and revealing new objects underneath. It can also be used to cut Trees down in the overworld.[4]

The Magic Hammer is found in the Palace of Darkness in A Link to the Past. It can remove obstacles from Link's path, allowing him to pass into otherwise inaccessible areas. It can be used to dispatch enemies such as Helmasaurs, and is essential in defeating Terrorpins in the Palace of Darkness. The Magic Hammer is also capable of shattering the faceplate of the Helmasaur King. Against most enemies, it deals as much damage as the Master Sword Lv2, but its reach is much shorter. Freezing enemies with the Ice Rod and then breaking them with the Magic Hammer instantly defeats them, often yielding a Magical Decanter.

The Hammer can be found in Mutoh's Temple in Phantom Hourglass, where it is used to defeat the temple's boss, Eox. It is also used to pound at objects, including Switches and Springboards that will propel Link into the air if he stands on it and pounds it with the Hammer. It is also one of the most powerful weapons in the game. The Hammer is controlled by holding and moving the Stylus on the Nintendo DS screen, which will drag Ciela around as she aims it and prepares to smash it.[5] It is possible to pound on objects and enemies that are far away from Link. When held for a while longer, the Hammer will grow to a gigantic size and will make a much stronger pound. It cannot be used while on stairs.

The Hammer is an effective weapon against certain enemies. Stalfos can be defeated with the Hammer in a single hit. By using it in conjunction with the Phantom Sword, it is also possible to defeat a Phantom without being seen by hiding in a Safe Zone.

The Hammer can be rented or purchased from Ravio's Shop in A Link Between Worlds. It is needed to progress through the Tower of Hera. The Hammer can be used to pound Moles into the ground, which then launch Link up to higher grounds, and it is essential to defeat enemies such as Deadrocks and Terrorpins.

If Link buys the Hammer, he can upgrade it to the Nice Hammer by returning 10 or more Lost Maiamais to Mother Maiamai. This form does more damage to enemies and sends out a shockwave to stun them.

The Magic Hammer deals twice the damage to enemies as Swords in Tri Force Heroes. It creates a shockwave when used, which can destroy Grass and Rocks and stun enemies. The Magic Hammer can be used to pound down stakes, destroy ice crystals, defeat Deadrocks, and make use of Moles.

Magic Hammers first appear in Silver Shrine, in which all three Links acquire one. They reappear in Ice Temple (two Hammers), Desert Temple (two Hammers), Dragon Citadel, and Sky Temple. They also appear in the Scorching Zone, Frozen Zone and Baneful Zone of the Den of Trials, as well as the Coliseum's Ice Cavern and The Ruins arenas. The use of Magic Hammers is required to defeat the Bosses Blizzagia and Stalchampion.

The effects of the Magic Hammer are improved while wearing Hammerwear. This Outfit doubles the item's shockwave size and damage output, while allowing it to be swung quicker.

In Zelda's Adventure, the Hammer is a Spell that Zelda can cast as a projectile with her Wand. It is a slow-moving Spell, but can potentially inflict a lot of damage onto enemies. It is dropped by Warbane after encountering him for the first time in the Shrine of Fire. It costs two Rupees to use. 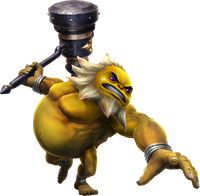 In Hyrule Warriors, the Hammer is a class of Weapon used by Darunia. It is associated with Fire.

A different Hammer also appears as an item in Hyrule Warriors Legends and Hyrule Warriors: Definitive Edition. This item is mainly used to smash objects, but can also be used as a weapon to attack enemies. It is also used to weaken the Helmaroc King.

Ravio also uses a unique Hammer as his class of Weapon, referred to as the Rental Hammer.

The Lv.★ form of the Hammer is the 8-Bit Food, which is modeled after the 8-bit Food from The Legend of Zelda. It was added to Hyrule Warriors with the Majora's Mask Pack DLC. In Hyrule Warriors: Definitive Edition, instead of appearing as a separate Weapon, the 8-Bit Food replaces the Darkfire Hammer when the "8-Bit Weapons" Setting is turned on in Game Settings within the Settings menu.

In Hyrule Warriors Legends and Hyrule Warriors: Definitive Edition, the fourth form of the Hammer is the Darkfire Hammer, which is associated with both the Elements of Fire and Darkness.

Darunia performs a quick dance to get himself pumped up. He then swings his Hammer down hard at his foes four times, the final strike causing a small explosion ahead of him. This attack does damage in a small range ahead of Darunia, and carries the Fire Element, making the thrown enemies take additional damage as they land.

Hammers in The Legend of Zelda series
Retrieved from "https://zelda.gamepedia.com/Hammer?oldid=858927"
Categories:
Hidden categories: