The Maidens are a recurring group of seven young women, including Princess Zelda, in The Legend of Zelda series.[2] In A Link to the Past, they are descendants of the seven Sages, from whom they have inherited magical abilities.[3] In Four Swords Adventures, they are also descended from Sages[4] and their role is to protect the Four Sword Sanctuary. In both games, they are taken captive and later rescued by Link, aiding him subsequently in his efforts to restore the peace in Hyrule. 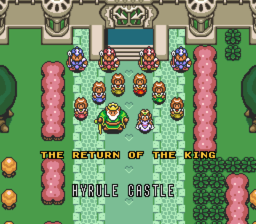 The King, the seven Maidens and four Soldiers in A Link to the Past

Long before the events of A Link to the Past, the seven Sages (named Wise Men in the original version)[5] joined forces with the Knights of Hyrule to seal Ganon and his influence in the Sacred Realm, preventing him from taking over the Light World.[6][7]

Prior to Link's quest, Agahnim, late King's right-hand man, used his power to find and capture the seven Maidens, who are descended from the Sages' bloodlines. While not as strong as their ancestors, the Maidens had inherited their magical abilities.[3] Agahnim planned to send them to the Dark World one by one in order to break the seal that kept Ganon locked up.[8][9]

Princess Zelda was going to be the seventh sacrifice, but she managed to telepathically send a message to Link, requesting him to rescue her.[10] Succeeding in bringing her to safety, Link was told to meet Sahasrahla, the Kakariko Village elder and a descendant of the seven Sages.[11] On his quest to obtain the Master Sword, Link also met the grandfather of one of the Maidens who gives him the Magic Mirror, and details on the whereabouts and use of the Moon Pearl.

Through all this, Link found and claimed the Master Sword, at which point Zelda sent him a telepathic message once more that the soldiers had found her.[12] Despite his best efforts, he could not prevent her becoming the seventh sacrifice. All was not lost, as Sahasrahla told Link that victory was still in reach if Link could reclaim the Triforce. To do so would require the help of the Maidens, who were still alive and trapped somewhere in the Dark World.[13]

Link set off to save the Maidens. However, each one was transformed into a Crystal in the possession of a demonic monster within a dungeon. The Maiden inside the Palace of Darkness elaborated on this, explaining that Ganon needed the gate to become larger to be of use to him and that he was still using the Maiden's powers to get that accomplished. She also explained that Link needed the Maidens' help to reach Ganon's Tower and urged him to rescue the others.[14] When Link collected all the Crystals, including one which sealed Princess Zelda in Turtle Rock, they helped break the barrier around Ganon's Tower as promised, allowing Link to go in and defeat Ganon once and for all.[15] During the ending, the Maidens are seen finally restored to their normal Hylian form, along with the revived King of Hyrule and Soldiers freed of brainwashing. 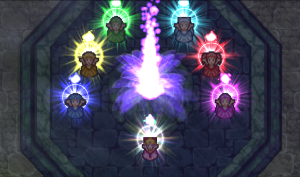 In Four Swords Adventures, each of the Shrine Maidens has an associated color after which they are titled. When freed, the Shrine Maidens turn into the form of Fairy's Spirits. Kaepora Gaebora returns to guide Link through his quest. There is no mention made of him being the reincarnation of an ancient Sage, but he is both known and respected by the Shrine Maidens.[17]

On a stormy night, Princess Zelda and the Shrine Maidens feared that the reason for those events was that Vaati's seal was weakening.[18] They summoned Link to the castle so he could protect them while they opened the portal to the Four Sword Sanctuary. When they did however, the portal turned dark and Shadow Link came from it. Using the confusion his looks caused, he abducted the Shrine Maidens and sealed them in crystals strengthened by Vaati's magic in dungeons all over Hyrule. This in order for either Ganon or Vaati to leech power from them[19] and to keep the Tower of Winds, where Princess Zelda was held captive, inaccessible.

Not the one to sit back and do nothing, Link entered the portal the Shrine Maidens had created before their capture and drew the Four Sword, thereby accepting the destiny of the Hero and the responsibility to free the Shrine Maidens.[20] Each Shrine Maiden he freed helped him reach another part of Hyrule, usually the part they watched over. They also used their ability to travel in fairy-form to accompany Link from time to time and hand him instructions on how to proceed. Once the sixth Shrine Maiden was freed, the group united their powers to call for Princess Zelda,[21] whom they found out to be held in the Tower of Winds. They urged Link to find the last royal jewel not yet in his possession so that they could summon the tower back to Hyrule.[22] The Shrine Maidens then went ahead to the Four Sword Sanctuary to keep it safe from attacks in the time Link would need to get the remaining royal jewel and to prepare for the ceremony.[23][24] When Link returned with all four royal jewels, the Shrine Maidens wasted no time on bringing back the Tower of Winds.[25] Link proceeded to rescue Zelda, who promised that she and the Shrine Maidens would prevent the evil Link had been fighting from recovering, but that he had to destroy Vaati to make peace return truly.[26]

The Blue Maiden is the first of the Shrine Maidens to aid the Hero. She appears to be in charge of Eastern Hyrule, where a village lies that is named after her. She was held captive in Hyrule Castle and guarded by Phantom Ganon.[27]

The Yellow Maiden is the second of the Shrine Maidens to aid the Hero. She is in charge of Death Mountain and was held captive in the Eastern Temple, guarded by Stone Arrghus.[28]

The Green Maiden is the third of the Shrine Maidens to aid the Hero. She was held captive in the Tower of Flames, guarded by several Dodongos. Her domain was not specified, but appears to be the area that includes The Field, The Swamp and Hyrule Castle.[17]

The White Maiden is the fourth of the Shrine Maidens to aid the Hero. She is in charge of the Forest of Light, now known as the Lost Woods, and was held captive in Hyrule Castle, guarded by the Big Poe.[29]

The Red Maiden is the fifth of the Shrine Maidens to aid the Hero. She was held captive in the Temple of Darkness, guarded by Phantom Ganon. Her domain was not specified, but appears to be the Desert of Doubt.

The Purple Maiden is the sixth of the Shrine Maidens to aid the Hero. She was held captive in the Pyramid, guarded by the Big Moldorm. Her domain was not specified, but it is implied that it is Frozen Hyrule as she is seen flying through this area after it has thawed during the ending sequence.

Zelda is the seventh Maiden and the final one for Link to rescue. She was held captive in the Tower of Winds, guarded by Frostare. 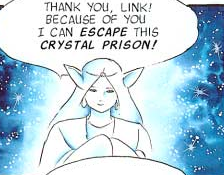 In the A Link to the Past comic by Shotaro Ishinomori, Agahnim has sent the Maidens into the Dark World so that Ganon could steal their power, thus weakening Ganon's seal and eventually open the way to the now tainted Sacred Realm.[30] Much like in the game, Agahnim casts his final incantation on the third and final Maiden, Princess Zelda, on the night of a full moon in front of Link's eyes, prompting the young hero to rescue the Maidens as well as the princess from the Dark World.

Link first learns of the Maidens when he talks to Zora in the Dark World, who mentions that a Maiden is imprisoned in the Palace of Darkness nearby.[31] When Link arrives to the Palace of Darkness, he denotes the firecorn explosives held in the storeroom, causing the entire palace to collapse but also allowing the Maiden to be freed from her crystal. As a sign of gratitude for saving her, the Maiden grants Link a relic called the Comfork.[32]

The second Maiden is found in a hidden chamber of the Swamp Palace. As Link makes his way to the maiden, a large, tentacled monster attacks him. He thrusts himself with the Master Sword into the monster and defeats the creature, which spits out Link from inside and gives him a chance to destroy the floating crystal where the maiden is. The maiden, now freed, thanks Link and tells him that Zelda is imprisoned in a Turtle Rock found at the end of the world, then vanishes.[33] Knowing this, Link eventually makes his way to Turtle Rock and frees Princess Zelda, and with her and the Maidens' help, Link and Zelda are able to go inside the Ganon's Tower.[34]

During the final battle with Ganon, Zelda fires an ordinary arrow from Roam's crossbow to the now-frozen Ganon. As the arrow approaches Ganon, it is empowered by Link, Zelda, Roam, and the Maidens, turning into a Silver Arrow and thus defeating the King of Thieves.[35] 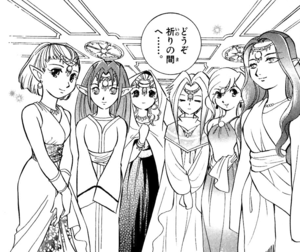 The four Links; Green, Red, Blue and Vio later meet the Blue Maiden in Hyrule Castle, who saves them from Shadow Link. Unfortunately, they do not have enough force to break the seal on her crystal prison, so they begrudgingly leave her there to return later. She senses that Zelda is still alive, far away, and she urges them to travel to Eastern Hyrule, where she believes another Maiden is sealed in the Eastern Temple.

After defeating Stone Arrghus at the Village of the Blue Maiden, they find the Yellow Maiden in the Eastern Temple. Overjoyed, she gives Green a Moon Pearl, which will open a gateway to the Dark World when struck by moonbeams. The Yellow Maiden later sends a Fairy to help Red and the others, which is able to transport them across Hyrule much like the Maidens are able to in their Fairy forms in the game.

The four heroes do not meet the Maidens again until near the end of their quest, at the Four Sword Sanctuary. Due to their efforts in dispelling the barriers of darkness and destroying Shadow Link, they are freed from their capture and appear before them together. By combining their powers, they transport the four Links to the Tower of Winds, and urge them to defeat Vaati and restore Hyrule to peace.