The Great Palace is the final Dungeon of The Adventure of Link.[1] It is the resting place of the Triforce of Courage.[2] Link seeks to enter the palace to claim the relic and unite it with its two counterparts, the Triforce of Power and the Triforce of Wisdom, in order to awaken a cursed Princess Zelda from an eternal slumber cast upon her an age before by an evil magician. After succeeding in lifting the "Binding Force" cast over the Valley of Death in the central section of Hyrule by restoring six crystals to their respective statues in six other palaces found across the land, Link is able to enter the palace in search of the final Triforce piece. Within the walls of the immense palace, Link is faced with his greatest challenges yet from some of the fiercest enemies he has encountered such as the very powerful guardian of the palace, the mighty Thunderbird, and shortly thereafter faces his own shadow to win possession of the Triforce of Courage from an old man that resides in the palace.

The origins of the Great Palace are unclear, such as who built it or when it was built exactly. The palace is introduced in the backstory of The Adventure of Link, which reveals that there was once a wise King of Hyrule that ruled over a golden age for the kingdom of Hyrule with the united Triforce at his command.[3] Before he passed away, the King decided to hide the Triforce of Courage in the Great Palace, located at the head of the Valley of Death in Eastern Hyrule.[4] The King crafted both a guardian for the palace as well as a final test for the one that would enter the palace in search of the missing piece of the Triforce.[5][6] Here the relic would remain, resting in the deepest sanctum of the palace, awaiting the time when a worthy person would come in search of it.

After Link shows Impa the Triforce mark that appeared on his hand, the nursemaid hands him an ancient scroll and six mysterious crystals which he must place on the six palaces scattered throughout Hyrule. Once all of the crystals are in place, the barrier protecting the entrance to the Great Palace will lift, allowing Link to enter it and defeat its boss, Thunderbird. Link then proceeds to fight his own shadow and, upon its defeat, an Old Man will allow the young hero to retrieve the Triforce of Courage which would be used to awaken the sleeping Princess Zelda.

Entrance to the Palace

The palace is found at the end of the lengthy Valley of Death, whose starting point is in the graveyard south of Old Kasuto, and ends southwest of Eastern Hyrule.

The entrance of the Great Palace. 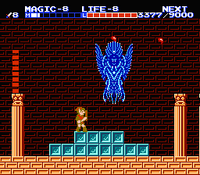 Link duels the Thunderbird in one of the most opulent chambers of the Great Palace.

The Great Palace utterly dwarfs the size of any dungeon Link has seen throughout his entire adventure (and even his previous adventure for that matter). With its winding passageways, multiple levels and treacherous lava pits, it truly proves to be the ultimate test of the hero's wit and his worthiness to take possession of the Triforce of Courage. The palace was built using cream-colored blocks and pillars, as well as cream-colored blocks that were meant to obstruct passage to its inner sanctums that could be destroyed with a mere swipe of Link's sword. The palace was built into the head of the Valley of Death and extends several stories beneath the surface, necessitating the use of several elevators at times to travel to the deepest parts of the palace where its biggest challenges await.

Many dissolving bridges are shown to have been built across the many lava pits within the palace as well. It appears to be semi-decorated on the interior as well, as many decorative curtains and statues appear within the palace's walls. It is also possible to start from the entrance of the Great Palace if Link is killed by pushing "Continue", making it so he does not have to trek back through the difficult terrain to reach the Great Palace if he continues.[7]