The Great Flood is the name often associated with a deluge that befell the land of Hyrule many generations after the end of Ocarina of Time in the Adult Timeline. Described in the introduction of The Wind Waker, it occurred when Ganondorf escaped from his imprisonment in the Sacred Realm and returned to Hyrule, after the departure of the Hero of Time.[1]

The people of Hyrule pray to the Goddesses for deliverance, resulting in the Great Flood.

The King of Hyrule, Daphnes Nohansen Hyrule, attempted to use his magic to stop Ganondorf, but failed. Left with no other choice, the people pleaded to the three Golden Goddesses.[5][6] The Goddesses eventually answered the peoples' prayers, instructing those chosen to flee to Hyrule's mountaintops in order to escape the coming flood and to prevent Ganon's wish of the destruction of the land. Once the people were safely away, the Goddesses caused a torrential downpour, covering the land and turning the mountaintops into islands.[7] The king chose to remain behind with his doomed kingdom. He split the Triforce of Wisdom into two parts and instructed the princess of that era to keep one piece and flee to the mountaintops with her servants.[8]

Ganon's army had already infiltrated Hyrule Castle when the goddesses sealed the kingdom within an enchanted air chamber that prevented the water from destroying it. A magical seal was also cast over the Master Sword and the Pedestal of Time that froze the entire land of Hyrule and Ganon's army, freezing them in time and draining the entire kingdom of color.[9]

The people of Hyrule would then go on to build a new civilization on the surface of the Great Sea and, with the passing of time, largely forget the memory of the old Hyrule that still existed deep beneath the waves.[10] 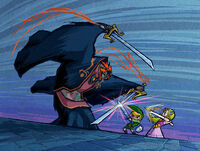 The final duel between Ganondorf, Link and Zelda in Hyrule's final moments.

Many centuries after the initial flood, Ganondorf broke free of the seal binding Hyrule and returned, intending to reunite the Triforce pieces to reconquer the sunken Hyrule.[11] This caused a new incarnation of Link and Princess Zelda to appear to challenge Ganondorf again, as had their predecessors. After uniting the Triforce, and at the will of the old King, the sacred pieces rise into the air and vanish as the air chamber above them begins to collapse, allowing the Great Sea to pour into Hyrule. After Ganondorf is defeated, Hyrule is completely swallowed by water, leaving Link and Princess Zelda to create a new Hyrule above the waves.