It has been suggested that the portion of this page concerning Subrosia Cemetery should be made into its own page. Should the target page already exist, this content should be merged into it where appropriate. Discuss this on article's talk page.

Graveyards,[1] also known as Cemeteries,[2] are recurring locations in The Legend of Zelda series. They are locations where the deceased are buried, often in tombs with marked headstones. They are frequently haunted by ghosts and other undead enemies.

In The Legend of Zelda, the Graveyard is first accessed by correctly navigating through the Lost Woods. It is a bleak, desolate, gray area characterized only by the white tombstones marked with blue crosses. Touching these tombstones will cause Ghinis to emerge from their graves. The lone Ghini floating outside is a "ring leader"; slaying that one will slay all others that appear. The Magical Sword can be obtained here after Link has twelve Heart Containers in his possession.[3][4]

In the Second Quest, Level 6 can be found beneath a tombstone.

In The Adventure of Link, the Graveyard is located in the Western Hyrule portion near the coast. Among the regular graves, the King's Tomb is also present. A grave a few steps south from the King's tomb holds a secret entrance to the Island Palace. 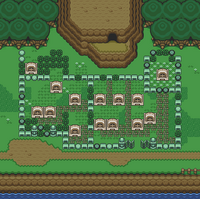 The Cemetery from A Link to the Past

In A Link to the Past, the Graveyard is also known as the Hyrulean Cemetery and is located just east of the Sanctuary in the Light World. Before the first defeat of Agahnim, the graves are patrolled by Soldiers, and when Link pushes some of the graves, Poes will rise from the bones of the dead. Later, after Agahnim has been defeated the first time, Poes will freely haunt the Graveyard.

A hole can be found under the westernmost grave that leads to part of the Secret Passage. A lone grave surrounded by stones that Link cannot move with the Power Glove hides a secret tomb that contains the Magic Cape. Link cannot push this grave open, so the Dash Bash must be used. The cave to the north of the Cemetery cannot be reached without first travelling to the Dark World and using the Magic Mirror. Deep within a Piece of Heart can be found.

The Dark World counterpart of the Cemetery is the Ghostly Garden.

In Link's Awakening, a four-screen Cemetery can be found on Koholint Island near Koholint Prairie and Tabahl Wasteland. In each portion, one Ghini floats around and more will appear if Link touches one of the graves. In the southeast portion, Zombies will appear in addition to the Ghinis. In the northwest portion, a Giant Ghini can be found.

In Link's Awakening DX, the Color Dungeon can be found beneath a tombstone in the southwest section. This dungeon can only be accessed by pushing the tombstones in a specific order as described in a book in Mabe Village's library.[5]

In Ocarina of Time, Kakariko's Graveyard is located on its outskirts, and Link must visit it both as a child and as an adult to obtain various important items from beneath the graves, such as the Hookshot. Dampé works here as the gravekeeper, as well as the host of the Heart-Pounding Gravedigging Tour. The Graveyard also contains a inaccessible ledge that leads to the Shadow Temple. The "Nocturne of Shadow" is required to reach it. 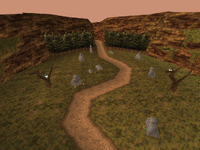 In Majora's Mask, the Ikana Graveyard is situated to the left upon entering the road to Ikana Canyon.[6] It is the resting place of the Royal Family of Ikana Castle.[7] Stalchildren inhabit the Graveyard and patrol its graves at night.[8] Link can enter each of the graves that the Stalchildren are guarding on a specific night; however, Link must only enter one of them in order to progress through the game. Dampé makes another appearance as the gravekeeper, but this time appears to be completely terrified of its ghosts and spirits.[9]

There is also a Goron Graveyard in Snowhead that houses the resting place of the Goron hero Darmani III. It is here that Link obtains the Goron Mask.[10] 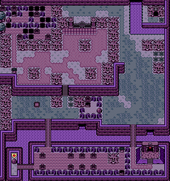 The Yoll Graveyard from Oracle of Ages

In Oracle of Ages, the present day eastern Labrynna is home to the Yoll Graveyard, a haunted place filled with many dead trees. Ghosts lurk little outside of Spirit's Grave along with the occasional Ghini. In the same place as Yoll Graveyard in the past lies the Ancient Tomb, a dungeon that houses undead enemies and the Falling Star, an Essence of Time.

In Oracle of Seasons, the Graveyard is located next to the Western Coast on a plateau isolated by the sea.[11] It is also infested with Ghinis. Beneath the Graveyard's northwestern masonry work lies the Explorer's Crypt.

To reach the Graveyard, Link helps the shipwrecked Piratians get their ship back out to sea. Having been on land for so long, the Piratians become seasick and dock their ship in a bay on the Western Coast. Thus, Link can use the ship as a bridge to the Graveyard.[12] To enter it, Link must change the season to summer and climb up a vine on the southern face of the plateau. Once Link obtains the Roc's Cape from Explorer's Crypt, he can enter the Graveyard from a cave in the southeast corner of the plateau. This allows him to enter the area in seasons other than summer, as the Graveyard itself has no Tree Stumps to change seasons with. If Link enters the Graveyard in autumn, he can pluck the Rock Mushrooms there and collect a Piece of Heart.

Another Graveyard called the Subrosia Cemetery can be found west of the shipwrecked Piratian Ship.[13] While stranded in Subrosia, the Piratians take up residence in the House of Pirates situated in the Cemetery. 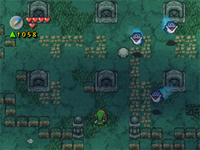 The Graveyard from Four Swords Adventures

In Four Swords Adventures, a Graveyard is found in the The Swamp, Near the Fields. It is watched over by Dampé as the Graveyard's caretaker.[14] The area is also heavily infested with Poes. The Big Poe is also located here.

In The Minish Cap, the Royal Valley features a small Graveyard situated in the upper portion of the forest of northwest Hyrule.[15] The Graveyard houses the Royal Crypt, the resting place of the ancient king of Hyrule, Gustaf.[16] Link and Ezlo are led here by Gustaf's ghost. Along the way they meet Dampé, who lets Link in to the Graveyard portion of the Valley.[17]

In Twilight Princess, a Graveyard is located behind Kakariko Village, accessible through a gate behind Renado's Sanctuary. The Graveyard serves as the resting place of the Zora race.[18] At the end of the Graveyard's pond lies King Zora's tomb. There is also another Graveyard located in Hyrule Castle.

Main article: Isle of the Dead

In Phantom Hourglass, there is a small Graveyard in the northwestern part of the Isle of the Dead, which was home to nine Sages who served under King Mutoh.[19]

The Graveyard from Skyward Sword

In Skyward Sword, there is a small Graveyard located in Skyloft. By hitting one of the gravestones near the tree at night, the nearby shed door will open. From there, a ladder leads down to Batreaux's house, where Kukiel can be found. During the night, the Graveyard, like the rest of Skyloft, is infested with Keese and Chuchus due to Batreaux's curse.

In A Link Between Worlds, the Graveyard is located next to the Sanctuary. Link visits it after he hears Seres screaming from inside the Sanctuary, whose doors were sealed shut. Dampé tells Link of a hidden passageway located under one of the gravestones which he can use to enter the Sanctuary.

Lorule's equivalent of the Graveyard can be found next to its cave-like Sanctuary. Link can visit its Graveyard to obtain a Master Ore needed to upgrade the Master Sword.