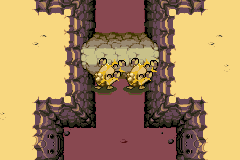 The Goron Sidequest is the lengthiest non-required game plot detour in The Minish Cap that incorporates Kinstone Fusion to achieve one of the four Empty Bottles of the game.

Located at the left-hand side of the Lon Lon Ranch region, a Goron can be found trying to break down a rock wall. By Fusing a Kinstone with the farmer Eenie, who resides in the Eastern Hills, the Goron Sidequest will be initiated. This will cause the Goron to break through the wall and begin forming a tunnel.

Over the course of the game, different Kinstone Fusions with five Mysterious Walls will trigger multiple Gorons to aid the original Goron in breaking down several nearly-impenetrable walls within the cave until six Gorons have been rallied. At that point, the Gorons break the final wall, and a Treasure Chest containing an Empty Bottle will be waiting for Link at the end of the tunnel.

By Fusing yet another Kinstone with the rightmost Goron at the end of the tunnel, Biggoron will appear over Veil Falls, where he will eat Link's Small Shield after Vaati has been defeated, only to return it to the young hero later as the Mirror Shield. The Mirror Shield, like the Light Arrows, Remote Bombs, and Magical Boomerang, is not required to complete the game.