Golden Bugs are recurring items in The Legend of Zelda series. They are insects scattered all around the overworld of Hyrule. A girl in Castle Town named Agitha fancies these bugs and sends invitations to 24 of them for her ball. She asks for Link's help in bringing all the bugs to her castle.[1]

Golden Bugs glow and make a shimmering sound. They can be attracted with the Lantern. Some bugs are out of reach, so Link must use the Clawshot or Gale Boomerang to collect them. There are 12 types of Golden Bugs, including a male and female of each type, for a total of 24. Both male and female variations of a single bug can be found in the same general area.

In Twilight Princess HD, she will also give Link a Miiverse Stamp of herself upon delivering half of the Golden Bugs. 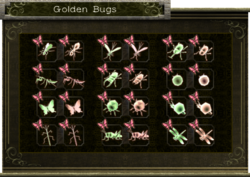 The complete collection of Golden Bugs

A male Beetle resting on a tree in the Faron Province

After giving a Golden Bug to Agitha, she recites a verse about it.

In Hyrule Warriors, Golden Bugs appear as part of Agitha's attacks. She can summon swarms of Golden Bugs as well as giant ones. She specifically uses female Golden Butterflies and male Golden Beetles for her insect related attacks.

See here for the translations of each particular bug.