Glitches in Ocarina of Time

These are the glitches which are possible to perform in Ocarina of Time. Please read the Glitch Disclaimer Notes before attempting any of the glitches on this page.

These tricks can usually be used anywhere, and are many times essential to doing glitches further down this page, in addition to many other miscellaneous uses. 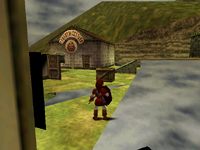 Link walking inside the house

As you walk directly into one of the above corners, draw the sword and hold Z. Push forward on the Analog Stick and press A to preform a Jump Attack. If done correctly, Link will move through the wall, into the void in some cases.

You must be near a pick up-able item (e.g. grass, rock) and have an enemy nearby. Have the enemy be near the item then press Z and R and roll into the item so that the action icon "attack" changes to "grab" then mash or time A while still in mid roll to "grab" the item. When you start to come up from the roll, if the enemy hits your Shield, it should activate the Superslide. You will be going backwards extremely fast and will not end until you let go of R (letting go of Z is fine).

By far the easiest way to do it. All you have to do is put on Nayru's Love and then just follow the steps in Ground Jump and you'll go flying back.

Probably the hardest, but most useful. Do a backflip, then in mid-backflip pull out a bomb and press R to drop it. It should be far enough away so that the action icon does not say "grab". Near the end of the bombs fuse, about 1/2 a second after it starts flashing rapidly, mash the A button. You will roll and should "grab" the bomb but not actually grab it. If you timed it right it will blow up when you get up and you will Superslide.

Bombchu: take out a Bombchu. Hold Z. Run off the ledge then quickly press R to Shield drop it and it will automatically explode. Press B quickly after pressing R for a slightly higher boost.

This can be used to get across the broken bridge in Gerudo Valley without the Hookshot, among other uses.

Sequence breaking is doing something out of the order the game was meant to be played. This can include getting items early and skipping items or entire parts of the game.

Link can also leave the forest early on the Nintendo 64 version of the game through use of the Crooked Cartridge trick. Go to the exit of the forest and stand by the left side. Perform the Crooked Cartridge and start walking towards the exit on the left side, and Link should clip through the Kokiri guarding the exit. Once inside, the Kokiri may block Link's path again, although he can be bypassed by moving to the right side and going up the slope on the side of the exit.

Another way to leave the forest early is to go to the crawl space which leads to the area containing the Kokiri Sword. Equip Deku Nuts to any C-button and have Link crawl into the space, then exit. While the screen still has the black bars at the top and bottom, quickly have Link read the sign. Once he reads the sign, press the button to which you assigned the Deku Nuts. If done correctly, Link will toss a Deku Nut and he will be able to move while still reading the text. Attempt to walk Link to the log at the exit and the Kokiri guarding it will not load, allowing Link to pass through.

Various glitches that come from the Swordless Link Glitch.

Use Items on Epona 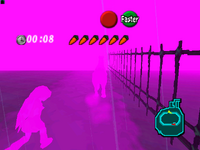 Random Glitches that don't belong in any other categories.

Use Ocarina in Lava 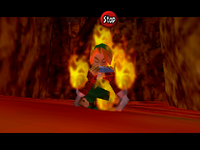 The effect of the "Use Ocarina in Lava" glitch.

Fall Off the World 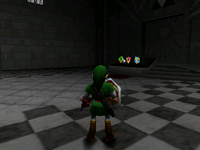 Navi stuck in the altar. 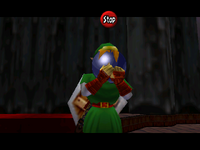 Doing the Ocarina Items glitch with a Bomb.

Use Deku Sticks as Adult

Use Master Sword as Child Link

Enter the Bottom of the Well Early

The glitch ends if Link does one of the following: