Glitches in A Link to the Past

These are the glitches which are possible to perform in A Link to the Past. Please read the Glitch Disclaimer Notes before attempting any of the glitches on this page. 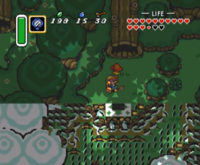 The Mushroom glitch being executed.

Glitch Your Way Into Palace of Four Sword (GBA)