Glitches in A Link Between Worlds

These are the glitches which are possible to perform in A Link Between Worlds. Please read the Glitch Disclaimer Notes before attempting any of the glitches on this page.

A Link Between Objects

Please improve it as you see fit. Editing help is available.
This article has been flagged since July 2015. 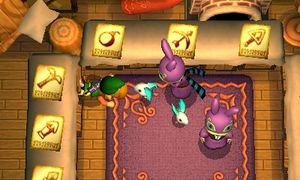 Two Ravios inside his shop