The Geldarm is a large centipede-like bug that is common to the desert regions of The Adventure of Link.[1]

Geldarms are very tall bugs that stretch up directly into the air,[2] waving in the wind of the desert regions it lives in. Geldarms emerge from below the surface and retreat into the sand if their body is struck with Link's sword. As the monster lowers itself, a few slashes with the sword to its head [3] will be more than enough to destroy the Geldarm. They are more of a path-blocking nuisance than a dangerous foe, but the rocks that fly around in the desert are hard to avoid when dealing with these enemies. 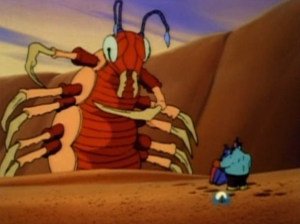 A Geldarm in Captain N

Geldarms appear in two episodes of Captain N: The Game Master. Here, they are depicted to be gargantuan monsters dwelling the deserts of Hyrule. In "Quest for the Potion of Power", Link, Princess Zelda and Kevin encounter a Geldarm while making their way to the Parapa Palace. Another Geldarm is encountered by King Hippo and Eggplant Wizard in the "Having a Ball" episode. Since the two minions possessed the Triforce of Courage and Power, the Geldarm, instead of attacking them, bows and puts itself at their service.[4]