It has been suggested that this article or section be merged with Failed Execution of Ganondorf.

Discuss this on the article's talk page.

This article or section is written like a story.

It uses overly elaborate and dramatized wording or has excessive plot elements not immediately relevant to the subject.
To meet Zelda Wiki's quality standards, it must be rewritten in a more encyclopedic manner.

Ganondorf's Execution is an event that took place several years following the Child Timeline ending of Ocarina of Time and the events of Majora's Mask, in which the King of Evil, Ganondorf, was captured and put on trial for his crimes against the Royal Family of Hyrule before being sentenced to execution. The results of this execution would be the roots of a much larger event far in the future: Zant's Invasion of Hyrule. The story of the execution is told to Link and Midna by the Sages in Twilight Princess. 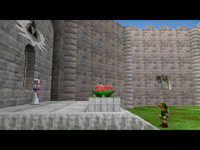 At the conclusion of Ocarina of Time, the young Hero of Time returned to Hyrule Castle to have a conversation with Princess Zelda about the Gerudo King of Thieves, Ganondorf, whom he knew was about to launch an assault against Hyrule in order to find the Sacred Realm.[1][2] Because the Royal Family had been warned, they were able to stop Ganondorf's plot before it came to fruition. After the failure of his attempted invasion, Ganondorf was taken prisoner.[3] Believing that Ganondorf would do something even more outrageous were he allowed to walk free, he was sentenced to execution at the Arbiter's Grounds.[1]

Execution of the King of Evil 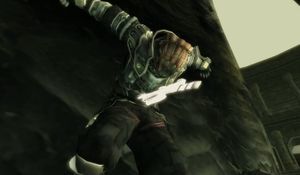 Ganondorf is impaled with the Sword of the Sages.

Several years after the ending of Ocarina of Time and Majora's Mask, the day came for Ganondorf's sentence to be carried out. The ancient Sages removed him from his cell within the grounds and took him to the Mirror Chamber atop the roof of the prison, home to the Mirror of Twilight. Here the Sages chained Ganondorf to a stone slab. Though he strained against his bounds, the King of Thieves looked on as the Sages gathered ceremoniously before him, standing in a line in front of the Mirror of Twilight and producing a sword of pure light. The Sage of Water brandished the blade, and in one swift stroke, impaled the King of Evil through his torso, creating a glowing wound on his chest. 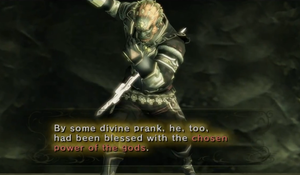 The Triforce at Ganondorf's execution.

It was at this moment however, when his body was damaged to the point of death, that the symbol of the Triforce of Power appeared on the back of Ganondorf's hand, preventing him from dying.[4] His strength restored, Ganondorf viciously lashed out, straining against his chains, even as the Sword of the Sages was still stuck in his chest. The Sages were shocked to see the symbol on his hand, not understanding how he could have attained the power of the gods.[4] Ganondorf broke his chains and rushed forward, obliterating the Sage of Water with a mere touch of his hand. He then pulled the Sword of the Sages out of his chest with ease and turned the blade upon its owners.

Shocked, the Sages activated the Mirror of Twilight. Though this would not kill Ganondorf, it would imprison him and prevent him from invading Hyrule again. Ganondorf, who had been standing directly in the path of the Twilight Mirror, was caught in the portal's path and was pulled backward toward it. Ganondorf let out a loud scream as he was transformed into twilight matter and sucked through the portal just as it closed. The Sages mourned the loss of the Sage of Water, but Hyrule was now at peace. Meanwhile, Ganondorf's spirit roamed the Twilight Realm, searching for a way to return to the world of light and conquer it. Ganondorf promptly revitalized himself using the lingering anguish and hatred from among the Twili that managed to bleed through the Twilight Realm's dimensional fabric.[5]