Fused Shadows are quest items in Twilight Princess.[1] They hold the magical power used by the Dark Interlopers in the Interloper War, who sought entry to the Sacred Realm to claim the Triforce.[2]

The enormous power of the Interlopers was sealed away within the Fused Shadow by three of the four Light Spirits, under the order of the Goddesses.[3] Anything that comes in contact with the dark power radiating from the Fused Shadow is transformed, as were the bosses of the first three dungeons.[4][5] This is especially apparent in the Goron Mines where Darbus, the patriarch of the Gorons, was transformed into Fyrus by this sinister power.[6] Midna entreats Link to recover the Fused Shadows in return for her help in his quest.[7] There are three Fused Shadows that must be collected during the game and are held by the dungeon bosses Diababa, Fyrus, Morpheel, and later Zant, of the Forest Temple, Goron Mines, Lakebed Temple, and Palace of Twilight, respectively. However, there are four in all - Midna's helm is the fourth Fused Shadow. 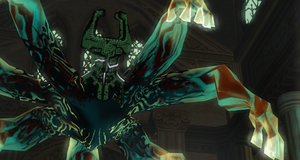 The Fused Shadows used to their full extent

However, this may also be because the Fused Shadow's power may have withered over time. This can be assumed based on the damaged and cracked condition of the actual relic, and Zant's reference to it as "ancient and withered."[8] Also, though Ganondorf is unharmed physically, he is no longer in the form he was in when he fought Midna; possibly because she weakened him.

It is unknown what ultimately became of the crushed fragment of the Fused Shadows. In the end credits, its pieces are seen lying half-buried in Hyrule Field.

In Hyrule Warriors, Midna wears a part of the Fused Shadow on her head. The complete Fused Shadow appears as part of her Focus Spirit Attack. When the attack is performed, the Fused Shadow will assemble on Midna, transforming her into a beast. She will then pierce her spear into the ground, returning her to normal afterward.

In Animal Crossing: New Leaf, the Fused Shadow appears as part of the Midna's Mask headgear.