The Foolish Monkey is a character in Majora's Mask.[3] 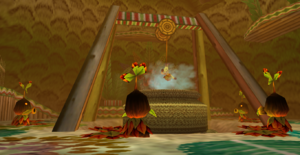 The Foolish Monkey being suspended over a cauldron from Majora's Mask

Though he attempts to teach the song quietly,[18] the Deku King overhears the exchange and affirms it as proof that the Foolish Monkey tricked his daughter into entering the Temple.[19][20] The Deku King then commands his subjects to commence with the Monkey's torture,[21] kicking Link out of the Palace in the process. As he is being dragged away, the Foolish Monkey instructs Link to take the Woodfall Temple Pathway to access the Temple and begs Link to hurry.[22] If Link returns to the Royal Chamber after this, he can witness the Foolish Monkey being repeatedly dipped into the cauldron of boiling water.[23][24][25] After the Monkey is dipped in the water, he will appear lifeless and remain silent.[26]

After Link rescues the Deku Princess and returns her to the Royal Chamber, she chastises her father for his hasty behavior and commands the Deku Scrubs to release the Foolish Monkey.[27] She then apologizes to the Monkey for his treatment,[1] which he dismisses.[28] The Deku Princess explains to him that Link cleared the evil from the Temple and returned the Southern Swamp to normal.[29] The Foolish Monkey then thanks Link for his help and rejoices in the fact that peace between the Monkeys and the Deku Kingdom has been restored,[30] though he still senses an unknown danger.[31] If Link speaks to the Deku Scrubs who oversaw the Foolish Monkey's torture, they will lament the fact that they were punishing an innocent Monkey.[32]

The Foolish Monkey can later be seen standing beside the Deku Princess in the credits.