It needs to be updated with information from Majora's Mask 3D.

Fishing is a recurring type of Mini-Game in the The Legend of Zelda series.[citation needed] Fishing involves using a Fishing Rod to haul out Fish from bodies of water. In some games, Link may use Bait or Lures to catch Fish. Link can usually fish in Fishing Ponds, which are dedicated Fishing spots that allow him to fish for a long time.

While Fishing, Link can earn various prizes from its respective Fishing Pond if he catches a Fish that meets a certain requirement.

In Link's Awakening, Link can fish in pond in the northern part of Mabe Village for 10 Rupees.[1] The prize for the Fish caught depends on whether it is a runt or a lunker. For a runt, the Fisherman will award Link with 5 Rupees.[2] If Link catches a lunker, Link will get 20 Rupees.[3] However, if Link catches one of the lunkers for the first time, he will get a Piece of Heart.

Fishing has been overhauled in Link's Awakening for Nintendo Switch with new features and more types of fish. As in the original game, it costs 10 Rupees to fish in the pond.

A variety of Lures have been introduced, starting with the Lightweight Lure. If Link has obtained multiple Lures, he will have the option of selecting his Lure before and during fishing. Rupees are now awarded based on the type and specific weight of the Fish. As fish are caught and removed from the pond, new fish will appear to replace them.

Link will receive a Piece of Heart for catching his first Fish of any size. The first time Link catches a Fish weighing over 30 pounds, he will receive either another Piece of Heart or one of two available Secret Seashells. Upon catching a "lunker" for the first time, he'll receive the Middleweight Lure, which makes it easier to catch bigger Fish. If Link catches a Cheep Cheep or Blooper he'll receive the Heavyweight Lure, which makes it easier to catch the biggest Fish. If Link manages to catch Ol' Baron, he will receive two Chamber Stones.

An empty Fairy Bottle can be found in the bottom left of the Fishing Pond and retrieved with the Fishing Rod. However, Fish will knock it off of the line if they notice it.

On the Game Boy, Link can use the left and right buttons on the directional pad to aim the cast, and once a fish is hooked, he must press the button rapidly to reel it in.

On the Nintendo Switch, the line can be wiggled with the L-stick to attract a fish's attention, and fish caught on the line are reeled in by rapidly tapping A. However if A is tapped while the fish is facing away from Link or out of water there is a high chance of the line breaking and the fish getting away.

In Ocarina of Time, Link can fish for an unlimited time for 20 Rupees, which includes the fishing rod fee.[4] If the Rumble Pak is connected to the Nintendo 64 controller, Link will be able to feel the vibrations of a Fish as it is being reeled in.[5] Any time Link catches a Fish, he can take it to the Fishing Hole Man to get it weighed. If the Fish breaks the current record by at least four pounds, Link will receive a Piece of Heart as a child, or a Golden Scale as an adult.[6] Any {{Term|OoT|Fish that breaks the record by less than four pounds will yield an award of 5 Rupees as a child and 20 Rupees as an adult. The default weight record to beat for Young Link is six pounds, while for Adult Link, it is seven pounds. Along with the prize, the record-size Fish will be kept inside a Fish tank near the entrance that displays the weight and the name of the person who caught it, the exception being the Hyrule Loach, which the owner will release back since it is an endangered species.[7][8]

Next to the hut is a Fishing Pond full of Fish ready to be caught. Link can use two types of fishing lures: the regular one, which already comes with the fishing rod, or an illegal lure known as the Sinking Lure, which can be found by walking around in the water.[9] The Sinking Lure is prohibited due to its relatively easy way of catching fish. If Link catches a Fish using the Sinking Lure and shows it to the Fishing Hole Man to get it weighed, the pond owner will deny Link a prize.[10] Despite this, the Fish will still be displayed inside the fish tank, but it will contain a note stating that the Fish was caught via the use of the illegal lure.[11]

Link can walk around the Fishing Pond to find the best spot to fish. Usually, the biggest Fish are located either by the log which can be stood on in the west side of the pond, or by three poles surfacing from the water on the east side. Sunrise, sundown, and while it's raining is when the fish tend to be more active and energetic.

Fishing is added in Majora's Mask 3D, though it is a completely optional activity and does not net any rewards. Link can fish at the Swamp Fishing Hole in the Southern Swamp, or the Ocean Fishing Hole in the Great Bay. Each of the fishing holes has 12 unique varieties of fish that can be caught, with 24 types of fish in total. The fish that are available in each location can be seen pictured on posters adorning the walls of the fishing hole shack, though each location also has a secret type of fish that does not feature on the posters.

To fish, Link must rent a fishing rod for 50 Rupees or by exchanging a Fishing Hole Pass. The owner will offer Link the choice of a standard fishing rod, which can catch surface-dwelling fish, or one with a Sinking Lure that can be used to catch fish that dwell deep underwater. Many types of fish require Link to wear certain masks or perform certain actions in order to make them approach Link or make them more vulnerable to capture. Some types of fish will only appear at specific times or on specific days, and some will adjust their swimming pattern during rain.

A few types of fish will be generated whenever Link enters a fishing hole. Leaving and re-entering the area will regenerate the fish, allowing different kinds to spawn. Link is only charged for renting a fishing rod and can explore the area freely, so Zora Link can be used to initially scout the pools to see if a certain kind of fish is present before committing. Deku Link can be used to hop between Lily Pads and islets, and to reach a large stone pillar in the center of the Swamp Fishing Hole. Goron Link can pound the ground to scare fish away or make the Colossal Catfish appear. The Fierce Deity Mask can be worn in both fishing holes and Fierce Deity Link's strength is needed to reel in the Grand Swordfish. 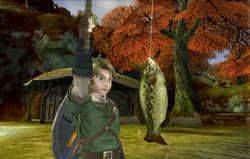 Bobber fishing is completely free and can be done in any area of Twilight Princess provided that there is a body of water near. It consists of a simple hook and a bobber attached to a line. After Link obtains the Fishing Rod from Uli near the beginning of the game, Link will also be given an item called a Fish Journal that keeps track of all the fish he has caught during the journey while bobber-fishing only.

To bobber fish in the Nintendo GameCube version of Twilight Princess, the fishing rod can be equipped to either the Y or X buttons. By pressing back on the C-Stick, Link will raise his left hand, turning the rod vertically. Only by releasing the C-Stick quickly will the line be cast into the water. The bobber will align itself vertically and start to sink. To catch a fish, Link must simply wait until the bobber gets pulled down underwater at least half of its total length. Waiting too long to pull back the C-Stick to catch the fish will cause the fish to get away; however, pulling back too early will not give it time enough to set the hook. Once the fish is finally hooked, the C-Stick must be pulled back at all times to make the fish land.

To increase the chance of fish biting onto the hook, Link can use two kinds of Bait. To equip the Bait in the Nintendo GameCube version (assuming there is not already Bait in the hook), the rod must be set to one of the two available buttons while the desired bait to the remaining button. The button in which the Bait is assigned to must then be pressed, causing Link to automatically set the bait to the fishing rod.

The types of Bait available for bobber fishing are:

Along with the type of bait available, Link also has two kinds of hooks. The first hook is the bone hook, which already comes equipped when Link first receives the Fishing Rod. The other hook, known as the Coral Earring, is given to Link from Prince Ralis after showing him Ashei's Sketch of Yeto.[13]

While Link is bobber fishing, he can catch the same kind of fish as he would if he were lure fishing (see below for the list). However, from time to time, Link might also accidentally reel in random objects like an Empty Can, a Bag of Rupees, a Empty Bottle, or even the Sinking Lure.

Lure fishing in Twilight Princess can only be done by renting a fishing rod and a canoe from Hena's Fishing Pond located in Upper Zora's River.[14] The fishing hole in Twilight Princess is unique in that each time Link enters the pond, the scenery changes to match that of the four seasons. The default season is spring; however, if Link reenters the fishing hole, the atmosphere will change to that of summer, and so on. This becomes important when seeking to catch the Hylian Loach, since the rare fish can only be caught during summertime.[15]

Link can fish alone with unlimited time for just 20 Rupees;[16] however, for 100 Rupees, Hena will join Link and advise him on several things such as the best spot to fish,[17] but will not allow the use of a Sinking Lure, as she believes it is cheating and harmful to the Fish and environment.[18] She will, however, allow him to use four different types of floating lures: the swimmer, popper, spinner, and frog types.[19]

The Fishing Pond area goes through a variety of weather patterns that affect the clarity of the water. In the morning, the water is usually rather clear, allowing Link to see the various types of fish that are in the pond. As the day progresses, fog will start to overcome the fishing hole, which makes the water rather opaque and hard to see through; thus, the fish will be almost impossible to see despite that they may be a few inches in front of the lure. 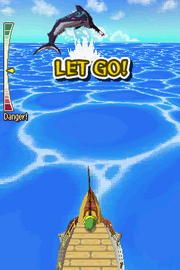 In Phantom Hourglass, the Fishing Rod can be used only when on top of one of the Fish shadows on the Sea Chart. While fishing, there is a bar that tells Link how close the Fish is to getting away. If the bar hits bottom, then the Fish gets away. To get the bar up, Link must pull the Fish towards the boat. If the fish jumps, Link has to let go of the rod.

Mechanics in The Legend of Zelda series
Retrieved from "https://zelda.gamepedia.com/Fishing?oldid=858943"
Categories:
Hidden categories: