The Fire Temple,(OoT | ST)[1] also known as the Mountain Temple,(ST)[citation needed] is a recurring Dungeon in The Legend of Zelda series.

The Fire Temple is located deep within the Death Mountain Crater and is only accessible to Link by use of the Goron Tunic, which is given to him by Darunia's son, Link, in the hopes that he will rescue the other Gorons.[2] Being in an active volcano, the Fire Temple is filled with many lava pits including the boss room. In the boss room is a giant rock platform where the battle takes place.

The maze of the rolling rocks on the third floor

Link's progress in the Fire Temple is based on opening jails so that the imprisoned Gorons can be freed. When a Goron is released, he gives Link a clue or tip regarding the use of the so-called special crop,[3][4] although some offer other facts; Link also receives keys to open locked doors. Throughout the Temple, there are bridges and platforms over magma that must be crossed, as well as complex mazes (one of them consisting of fire walls). Once the Megaton Hammer is found, after defeating the mini-boss Flare Dancer, Link may use it to break obstacles or create new paths.[5] 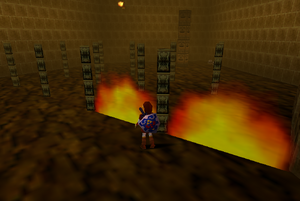 The fire wall maze on the third floor

The dungeon as a whole is notable for having a nearly-symmetrical architecture: From floor three upwards, the interior of the temple is divided into two, although Link only needs to visit the western territory to succeed on his quest (in fact, the other portion can only be accessed from the third floor by using the "Scarecrow's Song").

The Temple is home to an ancient dragon, Volvagia, who is known to have eaten Gorons in the past.[6] Defeated by an ancient hero with the Megaton Hammer,[7] he was resurrected by the evil Ganon.[8] The only real defense against the dragon is the aforementioned Hammer, which Link can put in practice as soon as the dragon is hesitating in one of the fire holes placed in the battle arena's floor.

Similarly to the rest of the dungeons, the Fire Temple was altered in the Master Quest version of Ocarina of Time. Honoring the name of the dungeon, the first rooms require Din's Fire to light several torches. Compared to the original version of the dungeon, the redesigned layout features a lesser focus on enemies and a stronger focus on puzzles. Additionally, most make use of the Hookshot. Some invisible walls and time blocks are found in the dungeon. Also, some switches need the Spin Attack to be activated, including one that is hidden inside a crate and can't be seen. There are fewer Gorons than in the normal version as well. Most doors are blocked with iron bars, and the Big Key and Megaton Hammer come very early. New enemies include several Stalfos, Lizalfos (found in the boulder room) and even an Iron Knuckle.

The Fire Temple is located at the summit of the mountain in the Fire Realm. Link has to meet with Embrose to play the Song of Fire Restoration and open the way to the dungeon. The area where the temple lies is guarded by three Snurglars, all of which hold three keys that will open the entrance to the temple once retrieved by Link. 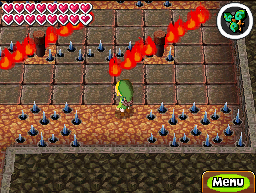 Link crossing one of the first obstacles

Many of the puzzles in the temple involve platforms that can be used to stand atop small volcanoes, and Arrow Orbs that redirect the trajectory of an arrow. In a similar way to the Cave of Flames in The Minish Cap, the Fire Temple houses minecarts that help Link move from a point to another quickly. The dungeon item is a Bow, which is obtained after defeating the Sub-Boss of the dungeon, Heatoise. Cragma is the boss of the Fire Temple. After he is defeated, the Spirit Tracks connecting the Fire Realm to the Tower of Spirits are restored.

In both this temple and the following one, the background music is different from the usual dungeon theme heard in the first three temples.