Fairies in the Spring

"Fairies in the Spring" was the eleventh episode in The Legend of Zelda TV series. It first aired in the United States and Canada on November 17, 1989. 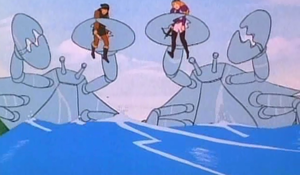 It is summertime in Hyrule and King Harkinian wants to build a Royal Water Park for all the people in his kingdom to enjoy.[1] However, as the construction is nearing completion, strange water creatures begin to attack the workers.[2] The workers' boss reports the incident to the king and Link and Zelda promptly go to the water park to investigate.[3] When they arrive, the duo are attacked by a water monster and later Zelda is almost drowned by an eel, but both are easily defeated. When they resurface, two crab-like monsters grab them and once the heroes zap them both,[4] they see that the King has arrived.[5] Just as Zelda warns him not to stand near the water,[6] a tentacle comes out of the water and grabs him, which takes him deep underwater. Link dives in to the pool but is unable to find neither the king nor the monster.[7]

Link and Zelda return to North Castle and ask the Triforce of Wisdom for advice,[8] who tells them to keep looking underwater.[9] Zelda takes the Triforce of Wisdom with her and,[10] when they arrive back at the park, she uses the Triforce of Wisdom's powers to allow them to breathe underwater.[11] Link and Zelda dive in, and when they find a grate that they can go through, a large fish suddenly attacks them and grabs the Triforce, which Zelda holds on to. Eventually, Link catches up to them and zaps the creature with the help of Zelda, and when they finally resurface, they find themselves in a familiar place but cannot figure out why they recognize it.[12] Just then, several beams come out of nowhere and land into the water, which makes three water monsters appear. Link easily zaps all of them but just as he defeats them, they keep respawning.[13] As Link is fighting the creatures, Zelda notices that the beams creating the monsters are coming from a tree and, upon further investigation, discovers that the monsters were being created by Spryte's sister.[14] Zelda then realizes that they are at the Fairy Spring that Spryte told her about,[15] and Spryte's sister explains that someone was draining their spring, which was the reason they were creating the water creatures.[16] King Harkinian, who was talking with the Fairy King all along, then comes out and informs to Zelda that their water park was inadvertantly taking water from the fairies' water supply, but he has already explained the situation to the Fairy King and all is forgiven.[17]

The construction on the water park is finally completed, and both the humans and the fairies enjoy it together. Link once again tries to get Zelda to kiss him, but when she complies, Spryte interrupts them with her return from her vacation.[18]

This is the only episode in the series where Ganon and his minions are not shown at all.

In one scene, when Link and Zelda are speaking to the King, the animation cel is off-center and the edge of the film strip is visible.