It has been suggested that the portion of this page concerning Sheikah Eye should be made into its own page. Should the target page already exist, this content should be merged into it where appropriate. Discuss this on article's talk page.

The Eye Symbol is found in throughout The Legend of Zelda series, and is often associated with the Sheikah tribe.

This is where the tear-drop eye symbol first appeared. From the beginning it had its basic form, an eye in the middle with three triangular lashes on top and a tear drop coming down from the pupil. It was the proud symbol of the mysterious Sheikah, the shadow race of Hyrule. The symbol seems to have been a very important part of Sheikah culture. They placed it all throughout the sacred Shadow Temple, and on their artifacts, including the Lens of Truth, the Gossip Stones, and the Mask of Truth. They also seem to have commonly placed it on their attire, as both Impa, the Sheikah sage of Shadows, and Sheik (Princess Zelda disguised as a Sheikah) placed it on their clothing.

In The Wind Waker, a version of the eye symbol can be seen on the Shields hanging at the door of the grounded ship atop Forsaken Fortress, where Ganondorf dwells. Although the tear is bigger and the eye smaller, it is still very close in appearance to the Sheikah eye symbol. Why such a symbol would appear there is a mystery, although it may indicate that the pirate ship where it is found was once crewed by Sheikah-descended pirates or that the shields came into the possession of the pirates without being associated with them. Forsaken Fortress is known to have once been a pirate hideout, though not much is known of them.[1] The eye symbol also appeared in the room containing the Master Sword, where it is displayed with only one triangular eyelash instead of the usual three in the stained glass window of Impa above her head.

The Symbol is displayed on the back of Princess Zelda's black cloak, showing the continued link of the Royal family of Hyrule and the Sheikah tribe. Also, the eye symbol features prominently on the Howling Stones, in the same way as the Gossip Stones from Ocarina of Time. It is also seen on the forehead of Madame Fanadi.

Artwork of Link with the Sheikah Slate

In Breath of the Wild, a newer design of the Sheikah's Eye Symbol is introduced, featuring an iris with pupil, and a circular motif surrounding the symbol. The symbol can be seen on the Sheikah Slate, and on the terminals found within Ancient Shrines and Sheikah Towers. When Link activates a terminal with the Sheikah Slate, data is transferred from the terminal to the slate in the form of a falling tear. The faces of all of the Sheikah Monks have a tattoo bearing the old pupil-less Eye Symbol, which is also depicted on towels covering the faces of Kalm Yu'ogh and Kam Yatakh. Payah also bears the symbol on her forehead, as facial markings. The Yiga Clan, being a splinter group of the Sheikah, uses an inverted Eye Symbol as their emblem.

Other Appearances of the Eye Symbol

Eye symbols have been seen throughout The Legend of Zelda series ever since the release of A Link to the Past. In the game, the evil wizard Agahnim has the eye symbol on his robe and throughout his lair. The symbol has lashes on the top and bottom. The inside circle is so thin that it almost appears feline.

In the opening of the game, it is seen that the Master Sword has a similar eye symbol on the hilt.

In A Link to the Past, Agahnim appears as though from nowhere to quell the misfortunes that are plaguing Hyrule using his powerful magic. Agahnim's origins are not entirely known, though he becomes close to the Royal Family of Hyrule following his curing of Hyrule's ailments before revealing his true colors. What is so curious about him is that the symbol that represents him, which is a modified version of the Eye Symbol that bears an uncanny resemblance to the Sheikah insignia. The emblem appears in front of the doors to Hyrule Castle Tower, Agahnim's lair in Hyrule Castle, and again in front of the topmost chamber of Ganon's Tower, where Link faces the dark wizard for a second time before discovering that he was Ganon's alter ego. This symbol, combined with Agahnim's relationship with the Royal Family and his knowledge of magic, has given rise to speculation that Agahnim may have had some connection to the Sheikah tribe, though this also is unconfirmed. Ganon refers to Agahnim as his alter ego,[2] casting doubt on this possibility, because Agahnim may have simply been a disguise Ganon used to fool the Royal Family and not a genuine Sheikah or member of any other race, though the true aspects of Ganon's relationship with Agahnim remain partially unclear. 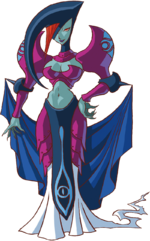 Veran bearing an Eye Symbol on her gown

In Oracle of Ages, it is noted that the villain of the game, the Sorceress of Shadows known as Veran, also bears a symbol resembling an eye that is slightly similar to the Eye Symbol of the Sheikah; along with Crests of the Gerudo on her shoulder-pads. Her self-proclaimed title, "Sorceress of Shadows", also correlates with the fact that the Sheikah also had magic based upon the element of shadows. Veran's red eyes also match the color of the Sheikah, and these facts have caused some to speculate that she may have some connection to either the Sheikah, the Twili, or both. In addition, when Veran is fought in the Turret of the Black Tower, an eye-like symbol that bears a much closer resemblence to the normal Sheikah symbol can be seen on the pillars in the room, reaffirming this potential connection. But as with Agahnim, apart from this symbol on her gown and her ability to use "shadow magic", Veran's relation to either or both of these groups has been left up to debate since no mention is made by her regarding either race. As such, Veran's true race remains unknown to date, leaving much of her backstory shrouded in mystery and leaving her origins open to speculation. 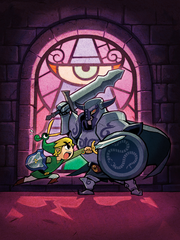 The Eye Symbol of Vaati in Dark Hyrule Castle

During Four Swords, the evil wind demon Vaati is seen as personifying the symbol with his one giant stylized eye. It was seen again during Four Swords Adventures and The Minish Cap. Vaati's origins are revealed to be rooted with an entirely different race from the Sheikah, that of the tiny thumb-sized Minish race. The villain first gained power through the magic of the Mage's Cap, a creation of his master Ezlo, in The Minish Cap. He then took on the form of a Hylian-like sorcerer and chose a single eye as his symbol of power.

What is so interesting about the form Vaati took after his transformation from a Minish however is that not only did he now have pointed ears, but he also retained red eyes (unlike other Minish featured in the game) as well as white hairs (like the only confirmed Sheikah in the series). These traits have caused some to believe that Vaati's new appearance and symbol were perhaps based upon the Sheikah, though this remains unconfirmed by any official source. The Sheikah do not make any official appearance in this game, and no evidence exists to suggest Vaati even knew about the Sheikah. This is further complicated by the fact that Vaati is revealed to be of Minish descent. Still, due to the similar appearance he took on after seizing the Mage's Cap and his choice of an eye as his symbol, his knowledge of the Sheikah or any connection he may have to them is also left up to debate.

However, since the Sheikah are known for their skill in magic and as the only real Sheikah known is a female, it is interesting to note that Vaati is supported by a group of female mages in Four Swords Adventures. One of them, in Kakariko Village, is a Fortune Teller like Madame Fanadi, a suspected Sheikah from Twilight Princess.

In The Wind Waker, Baito has a tattoo on his back that resembles the Sheikah Eye Symbol.

Another appearance of the symbol would be with the Twili in Twilight Princess. It can be found on their artifacts, such as Midna's helmet and the Fused Shadow. It is also seen on their buildings and in places such as above Zant's throne.

In Phantom Hourglass, the symbol on the front of the Guard Notebook resembles the Eye Symbol.

In Skyward Sword, symbols resembling the Sheikah Eye can be seen on the Timeshift Stones found in the Lanayru Desert region.

In Tri Force Heroes the eye symbol is present on the back of Wallmasters and on the face of Totem Armos. There are also symbols that greatly resemble it on the Desert Zone's Triforce Gateway in the Den of Trials.