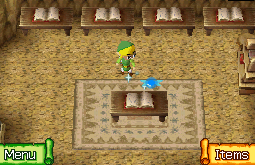 The room with the four volumes of the "Explorer's Compass"

The "Explorer's Compass" is a compilation of four volumes in Phantom Hourglass.[1] Written by the explorer McNey, it tries to decipher the riddle of the lost ancient civilization, the Cobble Kingdom, and its hidden treasure, the Aquanine.[2] It can be found in a cave situated in the Isle of the Dead along with McNey's last journal entry.

The contents of the four volumes are as follows:

Volume 1: The Riddle of the Cobble Kingdom Civilization

"In seas ruled by the Ocean King, the cultured Cobble Kingdom soared above all. It was more glorious than any other city until it vanished from history! Ruled by the king and his four knights, the temple once held great treasure."

"Three great treasures are hidden around these seas. One is the Aquanine. Legend has it there is but one of each of these pure metals in this world. Legend also says that one of the pure metals is kept in the Cobble Kingdom."

Volume 3: Where Did the Island of Dreams Go?

"Some say there is treasure in the Cobble Kingdom, but no one has seen the island. Only the ancient legend remains. Some say it is an island of dreams. "Proof" must be found on the Isle of the Dead to reach the Cobble Kingdom."

Volume 4: The Small Island of the Cobble Kingdom

"In the area of ocean near the Cobble Kingdom, there is an uncharted isle. Wonders are commonplace in this kingdom of dreams."

Interestingly, the European Spanish name for the "Explorer's Compass" is "Kasuto's Herald," the same name of the town from The Adventure of Link.