The Dark World is a dimension parallel to the kingdom Hyrule,(ALttP | FSA)[1] which is referred to as being a part the Light World in contrast, and a corrupted incarnation of the Sacred Realm.[2] The Dark World debuted in A Link to the Past, making it the first of many realms alternate to Hyrule to appear in the series, the latter being Termina, the Twilight Realm, the World of the Ocean King, and Lorule.

Though Four Swords Adventures also features a Dark World of its own, it does not seem to share a connection with the one in A Link to the Past. It should be noted that the former game features several references to A Link to the Past. According to Hyrule Historia, a Dark World is again featured in Twilight Princess, though this realm is the combination of Hyrule and the Twilight Realm.[3]

The Era of the Hero of Time

The Hero of Time's Defeat

During the events of Ocarina of Time, the Hero of Time unintentionally allowed Ganondorf to enter the Sacred Realm and obtain the Triforce of Power from the Temple of Light, resulting in the realm's transformation into the Dark World as a reflection of the greed and evil in his heart.[4][5] Seven years later, in the Downfall branch of the timeline, Ganondorf defeated the Hero of Time and obtained the remaining Triforce pieces of Courage and Wisdom from Link and Princess Zelda before being sealed by the seven Sages inside the corrupted Sacred Realm.[6] 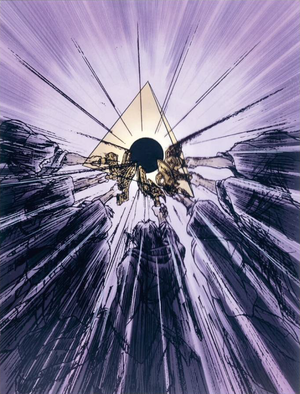 The Seven Sages creating their seal on the Dark World

A few years later, following a short-lived peace in the kingdom of Hyrule, the seal on the Dark World began to weaken, and many greedy people throughout the land who had heard legends of the power of the Triforce sought out the former "Golden Land" and disappeared inside it, transforming into monstrous representations of themselves, seemingly unaware that it was now under the control of Ganondorf.[7] As the disappearances went on and fighting broke out over the corrupted realm, the seal was broken and evil power began to flow forth from the entrance. In response to the impending threat to the kingdom, the seven Sages of that era, as ordered by the current King of Hyrule, began to seal the Dark World just as their predecessors had done in the past. To stop the Sages in casting their seal, many monsters rushed forth from the Dark World's entrance, but Hyrule's bravest knights fought to protect the Sages, many of them dying in the battle. They had bought enough time for the seven sages to successfully seal the Dark World, and the new seal held for many ages to come. The battle went on to become known as the Imprisoning War.[8]

The Era of Light and Dark

Now in the Dark World, atop the Pyramid of Power, Link is telepathically contacted by Sahasrahla, the Kakariko Village elder, who informs Link of the connection between the Dark and Light worlds at the Hyrule Castle gate.[13] Sahasrahla also prompts Link to save the seven maidens, as their powers can help stop Agahnim.[14] After rescuing a maiden, she will share her knowledge with Link, who learns that Agahnim’s true intent was to free Ganon from the Dark World.[15] Link also finds out from the maidens that he may be the last in the line of the knights who fought at the Imprisoning War, meaning he is destined to fight Ganon.[16][17] After saving Zelda from Turtle Rock, Link confronts Agahnim at Ganon's Tower and defeats the wizard for the last time. Ganon’s shadow is seen leaving Agahnim’s body, and it escapes to the Pyramid of Power. Link faces Ganon at the Pyramid of Power, and after a long battle, Link defeats him. With Ganon gone, the Triforce can now have a new owner. Link takes it in his hands and makes a wish on it to right many wrongs in the Light World, and the Sacred Realm is restored.

In A Link to the Past, the Dark World is a fully explorable Overworld. Once the Sacred Realm, or Golden Land, this world was twisted when Ganondorf claimed the Golden Power, or the Triforce. Its layout is very similar to the Light World’s, but there are notable differences. It contains many of its own unique locations, namely a large structure at the Dark World’s center called the Pyramid of Power. Everything in the Dark World, naturally, appears darker. Many structures and buildings are in a state of disrepair, specifically in the Village of Outcasts. All the grass is brown and withered, and the water is an unnatural jade color.

Even the world’s inhabitants are warped, due to Ganon’s power over the Triforce. People have turned into monsters, anthropomorphic animals like foxes or [[Storytelling Tree|ALttP}}</ref> Even other creatures from the Light World, like Cuccos, take on more sinister forms here. While the Sacred Realm normally changes to reflect the heart of the one who enters it, the Dark World seems to have a reverse effect.[18] The form that living things take in the Dark World is a reflection of what is inside their hearts and minds. When Link first enters the Dark World through a Portal on Death Mountain, he is transformed into a helpless rabbit, perhaps an indication of his pure nature.[19] However, if Link obtains a Moon Pearl from the Tower of Hera, he can keep his true form even in the Dark World.[20] 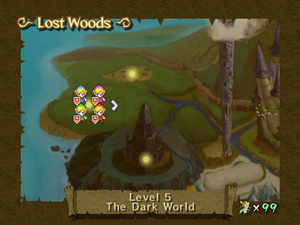 The Dark World of Four Swords Adventures can be accessed and exited via Moon Gates, which Link can see because he holds the Four Sword, which also allows him to see inhabitants and objects of the Dark World as shadows in the Light World.[24] Many Moon Gates require a Moon Pearl to be activated.[25][26] While Link usually enters the Dark World through Moon Gates, he can also be forced into it by a Floormaster. In the Village of the Blue Maiden, many children have been taken to it by “a dark shadow”.[27][28] Through a Moon Gate, the Dark World appears hazy, and the shadows seen in the Light World now appear as physical objects; the music is even an eerier version of the current area’s theme. While the Dark World looks much like the normal world, many objects and buildings are moved around.[29] This sometimes allows for Link to travel to places in the Light World that he could not reach without Moon Gates. While in the Dark, Link can lift his counterparts in the Light World and move them across gaps, which can be done to reach new areas and solve puzzles.[30]

The Dark World also appears as an area and the fifth Level in northwestern Hyrule, though it is different from the one entered via Moon Gates. This Level contains the Lost Woods, Kakariko Village, and the Temple of Darkness. In search of the Dark Mirror, Link ventures here, where a cloud of darkness has covered Hyrule.[31] It turned the Lost Woods, once called the Forest of Light, into a dark place inhabited by fell creatures.[32] While it is originally thought that this darkness was spread by Vaati and Shadow Link, who have been running rampant all over Hyrule, it is soon learned from Deku Scrubs in the forest that Ganon is its true source.[33][34] When Link leaves the Lost Woods and travels to Kakariko Village, he finds that the town, and even many of its citizens, has been corrupted by the darkness. It can be assumed that the same would happen to the rest of Hyrule if Link does not save it.[35] After aiding Kakariko Village, Link goes to the Temple of Darkness, where the Dark Mirror was hidden to keep it away from the rest of the world.[36] After he clears the Temple of Darkness, he finds that the Dark Mirror has been taken, and it is the likely source of the many Shadow Links.[37]

Hyrule Historia states that an iteration of the Dark World appears in Twilight Princess. Ganondorf's wish was to unite the Twilight Realm and Hyrule into a single world known as the Dark World.[3] Following Ganondorf's wish, Zant began a conquest to corrupt Hyrule by covering it in Twilight, a light-absorbing substance he created. Those trapped within the Twilight are transformed into ghostly beings unaware of their state, and monsters take on dark forms. Link enters Hyrule's Twilight multiple times, defeating the Shadow Insects each time, to restore the Light of the Spirits of Light and return the corrupted regions to their former state.

The Dark World itself does not make an appearance in Spirit Tracks, though the similarly named Dark Realm plays a role in the story. In the Japanese version of the game, the Dark World and the Dark Realm share the same name. 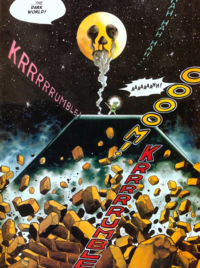 Link being transported to the Dark World

In the A Link to the Past comic by Shotaro Ishinomori, the events of the Dark World are heavily abridged: Skull Woods and Thieves' Town are entirely removed, and Link only saves two Maidens before rescuing Princess Zelda in Turtle Rock. Though Link enters Misery Mire and the Ice Palace, no maidens are imprisoned there. Link cannot travel freely between worlds and is trapped in the Dark World once Agahnim transports him there. Moreover, the young hero maintains his form in the Dark World by controlling his emotions, while in the game the Moon Pearl is needed to maintain human form.

After failing to save Princess Zelda from Agahnim's clutches, Link kills Agahnim by deflecting his own magic, but Agahnim, with his final breath, manages to transport Link into the Dark World.[38] Instead of turning into a rabbit when he stumbles into the Dark World like in the game, Link momentarily turns into a beast before suppressing his negative emotions and managing to stay in his human form.[39] He then resumes his search for the princess,[40] and befriends Epheremelda the fairy after rescuing her from monsters.[41]

Helping Link out as a guide, Link and his fairy companion successfully free two Maidens from their crystals, with one of them revealing to Link that Zelda is imprisoned inside Turtle Rock.[42] Link, with the help of Roam, a knight who is searching for the Silver Arrow in the Dark World, shows up and aids the young hero in defeating the monster in Turtle Rock.[43] With Zelda now saved, the trio head to Ganon's Tower, where Ganon rises from the defeated body of an Agahnim specter. Link stuns the beast with the Master Sword,[44] allowing Zelda to fire a Silver Arrow from Roam's crossbow and defeat Ganon. The Triforce rises from Ganon's body and asks Link to touch it with one wish in his heart as its new master.[45] The Triforce transports them back to the now-peaceful Hyrule, with the Dark World vanishing and releasing all of the people who had been trapped there.[46]