The Down Thrust,(TMC)[1] also known as the Downthrust,(TAoL)[2] is a recurring ability in the The Legend of Zelda series.[note 1] It is performed by Link by jumping into the air, positioning his Sword underneath him pointing downwards, and landing on enemies sword-first to stab them from above.

In The Adventure of Link, the Downward Thrust is taught to Link by a Hyrulean Knight living in the Harbor Town of Mido. However, since the main door is locked from the inside, Link must use the Jump Spell to reach the second story of the house and thus enter through its open door. The knight at the end of the basement will on Link's new skill upon talking to him.[4] This technique proves to be useful when fighting enemies such as Daira, Fokka, Moas, or enemies that are too small to attack normally, such as Myu. When used with the Power Glove, the Downward Thrust allows Link to crush rocks inside the many Temples of Hyrule.

In Four Swords, the Roc's Cape is required to use the Down Thrust, as it is they only way for the Links to jump.

In Four Swords Adventures, while the Links are jumping with the Roc's Feather or falling from ledges, they can perform this technique by pressing down on the Control Stick and the attack button at the same time. Upon landing, the attack will send out shockwaves, although they will not cause any damage to the enemies nearby. Like in The Adventure of Link, the Down Thrust can be used to break Rocks.

In The Minish Cap, the Down Thrust is a Tiger Scroll technique learned from Swiftblade. It also requires the use of the Roc's Cape.

In the Super Smash Bros. series, Link, Young Link, and Toon Link can perform the attack by pressing the smash button and the Control Stick downward at the same time. This is considered to be one of Link's most powerful moves, as it can deal up to 22% of damage and can be used as a meteor smash. However, if Link lands while the move is still in action, he will thrust the sword into the ground and will have to pull it out, leaving him open to other attacks. Also, when using it as a meteor smash near the edge of the stage, Link can self-destruct if he misses his target. In Super Smash Bros. Brawl, Toon Link's Down Thrust stalls momentarily when it begins, but then it launches him downward extremely quickly. 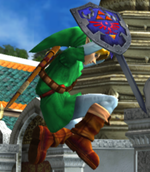 The Down Thrust is one of Link's Commands in Soulcalibur II, although it goes by the name of "Sword Plant." It is considered to be a mid-attack, dealing up to 40 HP worth of damage. The Sword Plant can be used to attack from a distance, since Link jumps towards the enemy as he begins to perform this technique. Due to its powerful impact, the Sword Plant knocks enemies down to the floor if hit; moreover, if Link hits the enemy on the first strike, he can damage the opponent with this attack up to two more times by continually pressing the vertical attack button. However, like in Super Smash Bros., if the young hero misses, he will be left open to attacks while he pulls the Sword from the ground.