Doppelganger is the seventh episode of The Legend of Zelda TV series. It first aired in the United States and Canada on October 20, 1989. 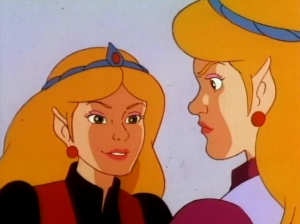 A Moblin tries to steal the Triforce of Wisdom, but Link easily defeats it with his sword and sends it back to the Evil Jar, with it dropping a Force Field Ring that Link picks up.[1] Ganon, tired of always failing, decides to use a new magic spell which plants a TLoZ (TV Series)Mirror (Object) in Princess Zelda's room.[2] Later on, when Zelda is brushing her hair in front of the Mirror, nightlight strikes it and copies her reflection in an evil clone of her. The clone orders the Moblins that accompany her to tie her up and take her into the Underworld via the Mirror.[3] Link, hearing Zelda's screams, rushes up to her room and defeats several of the Moblins, but one of the foes accidentally throws a vase at the Mirror, breaking it and impeding Zelda's clone from taking the Triforce of Wisdom to Ganon via the Mirror.[4] After Link zaps all of the Moblins, the clone kisses him unexpectedly and tells the young hero that they, along with the Triforce, are going to attack Ganon.[5] However, as the duo are making their way to an Underworld entrance, Link realizes the truth about the evil clone as she has no reflection but decides to follow her anyway to rescue the real Zelda.[6]

In the Underworld, Ganon leaves Zelda unattended as he summons monsters to welcome Link,[7] and the princess uses this time to break herself free from the ropes tying her by using a boomerang.[8] Meanwhile, Link is now also in the Underworld following Zelda's clone when suddenly Moblins and Stalfos attack them. The young hero easily disposes of them, and when the clone rewards Link with a kiss, the real Zelda appears. The evil clone takes the Triforce of Wisdom and runs to deliver it to Ganon, with the princess and Link in pursuit.[9] Eventually, they catch up to the clone, but not before defeating three Octoroks while using the Force Field Ring that Link found earlier.[10] During the struggle, Princess Zelda and her clone fall into muddy water, which makes both their clothes the same color and leaving Link unable to tell who is the real Zelda. The young hero decides to determine who the real one is by a "kissing content,"[11] and when one Zelda slaps him and refuses to kiss him, he knows that she is the real one because the evil clone had willingly kissed him several times before.[12] Quickly, Zelda picks up Link's sword and zaps her clone,[13] but before they can escape, Ganon appears.[14] Link fires a sword beam towards Ganon but it hits the ceiling, causing rocks to collapse on top of the evil wizard and falling into the mud. Taking this opportunity, the duo exit to the surface using the Triforce's power.[15] 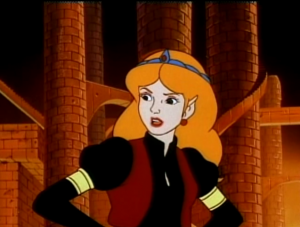