Death Mountain is a recurring location in The Legend of Zelda series.(TLoZ | TP)[1] It is a tall, often volcanic mountain that can be found in Hyrule, the Dark World, and Lorule.

In The Legend of Zelda, Death Mountain is the northern region of Hyrule. It is a large sprawling expanse of rock covering the northern border of the map. The mountain range is usually home to some of the stronger enemies, such as Lynels, who are said to be the guardians of the Mountain. Occasionally, Boulders will fall from the hills. The Mountain also has a few streams and ponds that are home to Zoras.

Death Mountain also has two distinctive landmarks. The first being Lost Hills, a mountainous counterpart of the maze-like Lost Woods. Beyond this maze is the fifth Labyrinth, Level-5, in the First Quest. The mountain also contains Spectacle Rock, which houses Level-9 and the location of Ganon. This Dungeon is a huge labyrinth found underneath the Mountain itself. It is the largest Dungeon in the game and is filled with lava pools and a large number of enemies such as Lanmola and Wizzrobes. Princess Zelda is held captive deep inside until Link rescues her.

In The Adventure of Link, Death Mountain can be found south of Western Hyrule. This area, located south of the Water Town of Saria, is comprised of many different tunnels that house many enemies, such as Dairas, several of which lead to dead ends if the wrong paths are taken. A few tunnels also have pools of lava, usually with a bridge suspended above them. Only a few paths lead to the southern region of Hyrule, where Link can find the Hammer hidden in a cave beneath Spectacle Rock.

In A Link to the Past, Death Mountain can be found on the northern border of Hyrule. It is home to many Deadrocks and numerous caves filled with Keese and Mini-Moldorms among other enemies. At the very peak of mountain, the Tower of Hera can be found beyond Spectacle Rock. Without traveling to the Dark World, Link cannot scale this peak to reach the dungeon and the final Pendant of Virtue. Here, the hero also meets the Lost Old Man, and by saving him, he is able to start the game from his hideout in the Mountain Cave. Later on in his quest, he is able to obtain the Ether Medallion and gain access to the Death Mountain Shop. Death Mountain is covered by constantly tumbling boulders.

In Ocarina of Time, Death Mountain is home to the Gorons, a peaceful race who eat rocks and are exceptionally good at forging blades.[2] It can only be reached via a gate in Kakariko Village. Anyone wishing to travel up to Death Mountain needs the King's permission.[3] It is said that the state of the mountain is reflected by the clouds surrounding the peak: if they look normal, then Death Mountain is at peace.[4]

The ancient dragon Volvagia was, in essence, the spirit of the Mountain.[5]

In Four Swords, Death Mountain appears as one of the four initial stages. By clearing the stage and defeating the boss, the Links receive a Key from the Great Fairy. The key received depends on how many Rupees were collected. The boss of Death Mountain is a flame monster called Gouen, and the symbol is the Fire Element.

In Four Swords Adventures, Death Mountain appears as an area of Hyrule and as the third Level. It consists of three Stages: Death Mountain Foothills, The Mountain Path, and Tower of Flames. 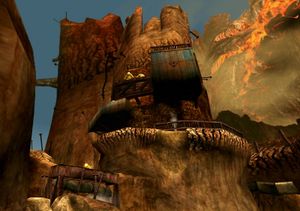 In Twilight Princess, Death Mountain is also home to the Goron tribe. Due to its volcanic nature, the mountain also boasts steam jets and mineral-rich Hot Springs. Death Mountain experiences frequent eruptions early in the game due to events related to the Twilight.

Sticking to the Gorons' reputation as skilled metalsmiths, metal structures have been erected around the face of the mountain to provide access to areas which are otherwise unreachable. The Gorons themselves can give each other and Link a leg-up to unscalable surfaces. The Gorons also have a mine inside the volcanic interior of the mountain, where materials are mined and transported with the assistance of magnetic cranes. The mine is also home to Torch Slugs and Dodongos.

When Link first tries to climb up Death Mountain, the Gorons attack him on sight due to an order from the Goron Elder, Gor Coron.[6] To successfully ascend the mountain, Link must use the Iron Boots to avoid being knocked down by the Gorons' roll attack and thus be able to stop them in their tracks. Link eventually reaches the main area of Death Mountain, where a giant rock from the mountain's volcano falls. After successfully evading the Gorons and using them to launch himself higher up the mountain, Link enters the Gorons' home. There, he is informed by Gor Coron that he will not allow him to enter the Goron Mines, which are sacred to the Gorons, unless he beats him in a match of sumo.[7] Successfully defeating the Goron Elder allows Link to enter the mines and obtain the second Fused Shadow, saving Darbus and obtaining the Gorons' respect along the way. 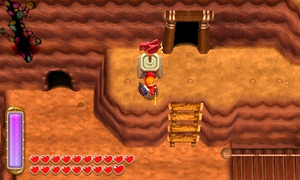 Hyrule's Death Mountain from A Link Between Worlds

In A Link Between Worlds, the volcano upon Death Mountain, Spectacle Rock, is active, which causes boulders to fall across the lower areas of the mountain. Spectacle Rock is now near the Tower of Hera. As the Dark World is not present in A Link Between Worlds, going through it is not necessary to reach the Tower of Hera. The cave system on the eastern side of Death Mountain is complex, containing several moving platforms that Link must fall on in order to reach the exits. One of the exits leads to Rosso's Ore Mine, which contains a portal to Lorule.

In Breath of the Wild, Death Mountain is a an enormous volcanic mountain in eastern Eldin. It is surrounded by a large moat of lava known as Death Caldera, which flows into other parts of Eldin as rivers and forms smaller bodies of lava. The Bridge of Eldin is the only means of crossing the moat.

Death Mountain has a higher temperature than the rest of Eldin, requiring Link to possess two levels of Flame Guard in order to explore the Mountain without being lit aflame and taking damage. Link can acquire enough Flame Guard either by wearing at least two pieces of Flamebreaker Armor or wearing one piece and using a Fireproof Elixir.

The music heard at Death Mountain has the same melody as the music that plays in Level-9 of the first The Legend of Zelda game. This is a reference to Level-9 being found within the original Death Mountain. 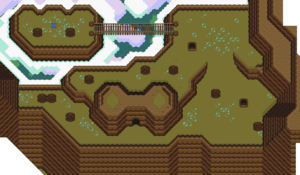 In Link's Crossbow Training, Death Mountain appears in Stage 2 as the Goron Target Practice. The central area of the Goron's lair is the first two screens of the stage. There, Gorons stand in various formations, roll in place, then spring up with either regular, gold, or false targets. The screen changes every 20 seconds, all with different formations of Gorons. 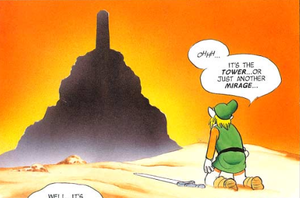 Death Mountain from the A Link to the Past comic

In the A Link to the Past comic by Shotaro Ishinomori, Death Mountain is on the borders of the Desert of Mystery.

While in the Desert of Mystery, Link is guided by Sahasrahla's telepathy to Death Mountain.[11] Link arrives to the mountain and stumbles upon a portal, which activates itself and shows a vision of two people standing with his uncle.[12] Believing them to be his parents,[13] Link reaches for his mother's hand when she extends hers out to the him, but Link's hand turns into a claw when it passes the portal's boundary. Sahasrahla warns that the power of the Dark World turns the inhabitants into a reflection of their heart, and Link's hatred of Agahnim would turn him into a beast if he were to enter.[14] Shortly afterwards, Zelda appears to Link and explains that they are in a dream, for if two people dream the same thing, they will meet.[15] After waking up from the dream, Link finds himself standing in front of the Tower of Hera, where he eventually retrieves the Pendant of Wisdom from Moldorm. 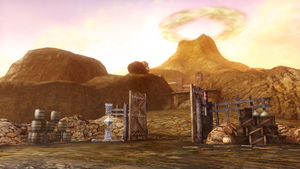 In Hyrule Warriors, Death Mountain appears as a stage part of Impa and Sheik's quest. Here, they must fight against the Gorons and their chieftain, Darunia, who is being controlled by Cia's Dark Forces.

Death Mountain appears as part of the overworld map in Cadence of Hyrule. Though its exact layout and location varies between save files, it is always where the Temple of Storms is located. Its music is a remix of the Death Mountain theme from A Link to the Past.

In the Japanese version of A Link to the Past and A Link Between Worlds, the mountain is only named Death Mountain in the Dark World. In the Light World, it is known as ヘブラ山 (Mount Hebra).