Darknuts are recurring enemies and Sub-Bosses in The Legend of Zelda series.[1][2]

Darknuts resemble large knights equipped with heavy armor, a large sword, and a wide shield. These foes share trite similarities to the Iron Knuckle enemy and the Boss, though there are a few discernible differences, one being the Gothic appearance of Darknut's armor as opposed to the somewhat Eastern appearance of the Iron Knuckle's armor. Apart from that, the two have never appeared in a game together, aside from the non-canon The Wand of Gamelon, where Darknuts are a common enemy and an Iron Knuckle is a boss and Cadence of Hyrule, where they are enemies and sub bosses.

These enemies are masters of swordfighting, seen most vividly during battles fought with them in Twilight Princess, where the differences in size between Link and the Darknut further emphasizes this accurate behavior.

Darknuts charge at Link in Link's Awakening. Like their Blue and Red counterparts in the The Legend of Zelda, they could only be harmed from the back or the sides. Some also throw spears, which is rare, since they attack with their swords.

There are two types of Darknut in The Wind Waker, Darknuts and Mighty Darknuts. Darknuts themselves have shields along with their swords and appear as enemies from the Earth Temple onwards. 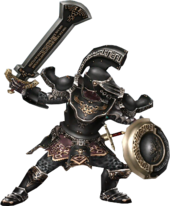 In Twilight Princess, Darknuts remain one of the most powerful enemies in the game, even more formidable than their The Wind Waker counterparts. They still retain some of their characteristics like removable armor and high defense, but now have increased speed and more sword techniques. Their armor has become less bulky and more streamlined like a medieval knight. In terms of equipment, they use either a large Sword or a mace in conjunction with a Shield. Midna does not know how to beat them, but suggests that Link should try using all of his sword techniques.[3][4]

Darknuts come in two phases, the first being armored. The best strategy is for Link to draw it towards him, backflip when they plunge their sword down, and then land a Jump Strike. The Back Slice, Helm Splitter and Mortal Draw are also effective. Bomb Arrows can be used to remove a Darknut's armor from afar (or Bomblings provided Link angles them so as to not hit the Darknut head-on), but the Darknut's shield will soak up any arrows aimed at it directly. Link must instead target the ground immediately next to or behind the Darknut. When Link lands a hit on it, some of its armor strips off, though not as quickly or in as large amounts as in The Wind Waker.

Eventually, when all of its armor is off, revealing its chain mail under-armor, it proceeds to jump back and throw its weapon at Link. It then pulls out a smaller sword (a longsword), granting it different attacks, and becomes much more agile, having shed its bulky armor. An unarmored Darknut tends to attack with two cuts in succession (which gives Link a split-second opening to counterattack), a thrust, or a kick which can briefly throw Link off balance. The Darknut also becomes far more adept at blocking Link's attacks and can dodge explosions and arrows effortlessly. Jump attacks, jump strikes, and back slices can send a Darknut reeling just long enough to attack.

One Darknut with a different helmet, sword and shield is the mini-boss in the Temple of Time, while others commonly guard items such as keys or new areas. Red and blue variants of the Darknut are also found in the Cave of Ordeals. A gold armored Darknut is found in Hyrule Castle. However, the differently colored equipment does not denote any change in the Darknut's physical attributes.

In Link's Crossbow Training, a Darknut appears as the boss of Stage 8-3. Its appearance is identical to its Twilight Princess incarnation, but now attacks by unleashing a swarm of insects in addition to sword combat. Its shield is invulnerable, requiring that Link wait until the Darknut attacks to shoot its armor off with the Crossbow. The armor appears to be enchanted, as each piece turns into a larger insect that attacks Link after it has been shot.

Darknuts appear as Minibosses in Cadence of Hyrule where they move to the beat of the music. They move faster than most Minibosses as they move on every beat, making them speedy yet powerful enemies despite wearing bulky armor. They also carry a shield that protects them from frontal attacks and can push the heroes backwards as they move, making them dangerous in areas where they can pin the heroes against walls or push them into holes and other hazards. Every few beats, they will lower their shield which will temporarily expose them to attack. When their shield is down, they will only swing their sword if the hero is either standing still or tries to run to their sides.

When the opportunity to strike the heroes arises, they will hold out their sword for one beat and 5 warning tiles will flash in a horseshoe formation before they swing their sword on the second beat, dealing damage to anything within 3 spaces in front of them and anything that was already standing at their sides.

Equipping the Ring of Piercing, the Great Bow, or Fragarach will enable the heroes to attack them through their shields. 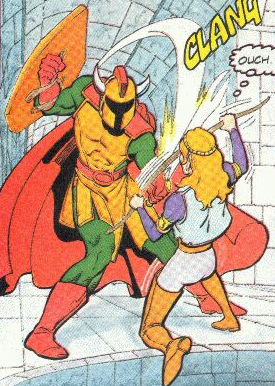 Zelda fighting against a Darknut in The Legend of Zelda comic

In The Legend of Zelda TV series, a Darknut appears in only one episode: "That Sinking Feeling". In this episode, Link and Princess Zelda encounter a Darknut as they are journeying through the Underworld. The Darknut blocks most of Link's sword attacks, and when the Darknut swings his sword at the young hero, Link manages to evade it but falls in the process. Just as the Darknut is about to strike at him, Link kicks the foe's ankle and the Darknut falls, allowing the young hero to deliver the final blow. The Darknut leaves behind a Magic Bracelet, which proves to be useful later on in the battle against Ganon.[5]

In the The Legend of Zelda comics by Valiant Comics, Darknuts mostly resemble their artwork depiction of the original The Legend of Zelda. Like in the games, there are red and blue Darknuts, with the blue Darknut being known as Darknut Prime.[6] Like most of Ganon's minions, these foes are also capable of speech.[6] Although a robed Darknut makes an appearance in He Also Serves, normal Darknuts are first introduced in The Power, where Link and Zelda encounter them upon entering the Underworld. The young hero manages to bury them under a pile of rubble thanks to a bomb's explosion,[7] but the mighty foes recover and start chasing Link again. Eventually, Link is able to easily defeat them with the use of the Triforce of Power.

In Choices, Zelda encounters a Darknut after fleeing from Ganon's grasps, but her life force is nearly gone from having used all her magic to escape and is unable to put up a fight against the knight.[8][9] However, the princess refuses to give up,[10] and although she is weak, she manages to win against the Darknut by sending him down a bottomless pit.

In The Crystal Trap, a Darknut will greet Princess Zelda's arrival to the Dark Tower by promptly attacking her upon sight. By shooting an Arrow at the Darknut's back, Zelda defeats the foe and climbs up the tower to find that the Darknut was actually protecting the Handprint, one of the three items necessary to free Link from the Crystal.[11]

In The Shadow Prince, one or more Darknuts ambush Princess Zelda, Charles of Moria and Link while they are in the woods, depending on which path Link takes. If the young hero chose to go back to North Castle to get help for the fainting Zelda, he will return only to hear the princess excitedly flatter Charles, saying that, while Link was gone, Charles defeated a Darknut and caused the other two to run away in fear. However, if the young hero agrees to let the Morian knight take Zelda back to North Castle, a Darknut will suddenly appear and charge at Charles, who confidently faces his enemy with having two weapons to choose from: his axe or sword. Although Link tries to help Charles in the fight, he will be unable to draw his sword since it seems to be stuck to the sheath, forcing Zelda to fight with her dagger instead. The Darknut, once defeated by Charles's axe and Zelda's dagger, will leave behind a Red Darknut Arrow.

Later on in the book, after the King of Hyrule calls a Royal Council informing about the latest sightings of monsters appearing in strange places, he mentions that an entire mob of Darknuts were spotted in the Jungle of Favors the night before.[12] Since Darknuts do not usually appear outside of a cave or a castle,[13] the king considers the spotting of the Darknuts in a jungle to be alarming and decides that the Triforce of Wisdom should be immediately delivered to the Fifth Castle of Ancient Hyrule to keep it safe from Ganon.[14]

Darknuts appear in Hyrule Warriors as Captains. Their design resembles the unique, lone Darknut from the Temple of Time in Twilight Princess. Darknuts attack using their sword, and have two separate attacks that reveal their weak point gauge. One of them involves the a red glow coming from around their eyes, followed up by a large upward sword thrust. This attack is special in that if you’re standing close enough to the darknut and happen to be guarding, your guard will break when their eyes glow, meaning it’s best to avoid getting too close to one. It’s over attack that reveals it’s weak point gauge involves it readying it’s sword and taking out its longsword, before unleashing multiple rapid-fire attacks with both blades. That’s your opening to use a boomerang on it, which will cause it to start slashing out of control at it’s allies, before revealing it’s weak point gauge. A darknut’s weak point gauge can also be revealed by dodging behind it. An easy way to do this is attack it until it’s guard is up and then dodge behind it.

When defeated, they may drop a Piece of Darknut Armor and occasionally a Large Darknut Sword. The VS Undead Skill affects these Darknuts, implying that they are undead creatures.

In Super Smash Bros. for Nintendo 3DS, Darknuts in their Twilight Princess Temple of Time appearance appear as enemies in the Smash Run mode and as a Trophy.

In Super Smash Bros. Ultimate, Darknut appears as a Spirit with the ability, Sword Attack 🠅, which makes a Fighter deal more damage when using a sword.