Zelda Reorchestrated (ZREO) was a fan project created in October 2004 by FireGS and was owned by Eric Buchholz until its closing in 2013. ZREO's goal was to reorchestrate the greatest songs from The Legend of Zelda series using professional grade audio manipulation software. The project created some controversy with fans for not using a real orchestra. However, it garnered so much attention that a strong and very loyal fan-base had been established. The uniqueness of the project led the site to receive two awards. [1][2]

(Oct 2004 – Dec 2004) Zelda Reorchestrated was first established under the domain http://www.zreo.tk in October 2004. It was here where ZREO began its goal of reorchestrating the complete soundtrack from Ocarina of Time.

(Dec 2004 – May 2005) The next step was obtaining an independent domain name without the troubles of the free .tk service. In December 2004, zreo.net was born. It was the same site, but different (and more flexible) domain. It was here when FireGS revealed that he intended on reorchestrating the music from every Zelda game.

(June 2005 – December 2005) In April 2005, FireGS wanted to achieve a larger goal than simply reorchestrating music. He wanted to provide a more general service to the Zelda community. Zelda Music and Media (also known as ZeldaMusic, ZM, or ZM.org) was born under the domain http://www.zeldamusic.org. ZREO continued producing music, but along with that came new community forums, an online radio station (WZMR), and general information about Zelda music! The site came to a close due to financial barriers.

(December 25, 2006 – June 12, 2013) HTLOZ II preserved the work of ZREO during its absence during most of 2006. ZREO relaunched Christmas of that year and it officially presided under the domain http://www.zreomusic.com until its official closing in June of 2013.[3]

The ZREO Team made a number of public appearances, presenting themselves at events including VGXPO 2009, E3 2010, E32011, and PAX Prime 2011. In 2009, the team fundraised over $2,000 to cover the costs of professionally produced CDs and postcards used to promote the site at the shows they attended. 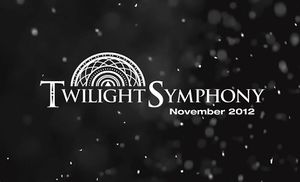 Official Logo for the Twilight Symphony

This project aimed to capture the feel of the Twilight Princess soundtrack in a new and unique way. The album is approximately three and a half hours long, and thanks to the contributions of loyal fans, features a professional Hollywood choir. The project raised close to $30,000 towards the live choir--the largest fundraising event in the history of Zelda fan sites.

The Album was released in November of 2012. Kickstarter backers of the project and those who preordered the Album received physical CDs of the Album, while everybody else could download the album digitally via either Torrent or eventually a mirror. Current Digital Downloads of the project can be found here As well as on YouTube.

Radio Hyrule (previously World Zelda Music Radio) is a project owned and operated by members of the Zelda Reorchestrated Team in which the purpose is to provide rising musicians an outlet to display their creative musical works while providing Zelda fans with an entertaining online radio station.

The station features the entire ZREO library, along with countless other remixes produced by members of OverClocked ReMix, Newgrounds, YouTube, and random places. Radio Hyrule also serves as a catalog, or compendium of Zelda music arrangements, covering as many quality remixes from throughout Zelda's history as possible. 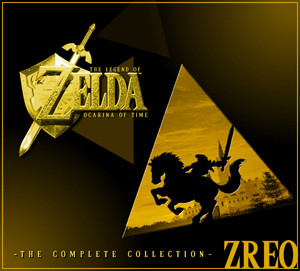 Album art for the Ocarina of Time - Complete album.

Ocarina of Time was completed on December 25, 2009, fulfilling ZREO's original goal of reorchestrating the Ocarina of Time soundtrack. The full 82-track album is available online for free and falls under a Creative Commons Copyright License.

ZREO produced three albums under the 'Soundscapes' name. The three albums feature reorchestrated themes from a variety of titles from different Zelda games. What makes these albums stand out is that atmospheric sound effects were added to them to make the listener feel as if they were in the environment itself. One of the best examples of this is the Soundscapes track "Market." When compared with the original, or non-soundscape version, you can clearly note the difference in overall feel and atmosphere.

Soundscapes: Volume 1 was released February 16th, 2007 - with 8 tracks to its name. This unique project earned ZREO's website 3 million hits the week it premiered - an article on Digg captured the attention of music lovers. The music comes from the soundtracks of A Link to the Past, Ocarina of Time, Majora's Mask, The Wind Waker, and Twilight Princess. ZREO has sustained a high number of visitors since the release of this album.

Soundscapes: Volume 2 was released March 31, 2007. This 9-track album features music from six Zelda games, including: A Link to the Past, Ocarina of Time, Majora's Mask, The Minish Cap, The Wind Waker, and Twilight Princess. This album did not receive as much attention as the first, but was still received well by fans.

Soundscapes: Volume 3 was released August 22nd, 2008. It is a 13-track album featuring a prominent water theme. Music featured on this album comes from many Zelda games, including: A Link to the Past, Ocarina of Time, Majora's Mask, The Wind Waker, and Twilight Princess.

The Soundscapes albums rocketed ZREO into popularity and are still available online. The positive fan feedback reinforced ZREO's attempts to do something ambitious. Projects such as this became a tradition of ZREO's. As a result of the Soundscapes albums, ZREO was one of the most-visited websites within the Zelda community.

Though the team did not release another Soundscapes album, they were released individually or with the original song as an alternate version.

Open Symphony is a ZREO project that was never completed. It was to feature creative arrangements of Zelda music rather than orchestral covers of the original music.

Open Symphony was the first ZREO project to allow fans to view the score for the songs that were released. The score was divided into all of the parts that make up the song, but the whole score was available for viewing and downloading as well. Because of this, the scores can be performed by live orchestras.

The team decided to close the website down in early 2013[4]. This was made as a decision by the team, and though controversy arouse that Nintendo had decided to shut the project down, the team made it clear that this was a decision that they came to themselves. The Twilight Symphony as well the rest of the ZREO collection was uploaded to the Zelda Universe servers, and can now be found on this mirror