Community:Hyrule: Land of the Legend

Hyrule: Land of the Legend is a former award-winning website [1]. They were most notable for their exclusive news reports and the fact the site was available in 8 different languages, along with a number of rarer website features like comics, sheet music and fan movies.

Land of the Legend started in 2004 as a Zelda-website under the domain name Hyrule.nl, but it already carried the name Hyrule: Land of the Legend. Mighty Dekunut founded the website because he was unsatisfied with the "lack of good news service in the Zelda community. I feel like I need to visit 3 or 4 sites to really be able to follow all the Zelda news".

Early in 2005, Mighty Dekunut came to an agreement with Dustin to cooperate and run the website on the domain name Hyrule.net. Leading up to the E3 in May, Hyrule.net already regained some of its former fame by the new site team's professional approach to news reporting, but it was the exclusive reports from the 2005 E3 that really got things going.

Despite having grown to one of the biggest Legend of Zelda-websites, along with Zelda Legends and Zelda Universe,[1] a conflict between the webmasters of Land of the Legend, and host Dustin caused a split of the website with the domain name hyrule.net, and the website was moved to the domain landofthelegend.net, but kept the name Hyrule: Land of the Legend. It had little effect on the website though, and they continued to grow, with another peak at E3 2006, where The Legend of Zelda: Twilight Princess was playable for the first time on the Wii, The Legend of Zelda: Phantom Hourglass was shown, and the announcement of Super Smash Bros. Brawl.

The end of an era

In early 2007, after the release of The Legend of Zelda: Twilight Princess, The Legend of Zelda: Phantom Hourglass and Freshly-Picked Tingle's Rosy Rupeeland, and the lack of a new Zelda-game announcement and with that activity in the Zelda community, Hyrule: Land of the Legend decided to close their services.

The basic principle of Hyrule: Land of the Legend was doing things their own way. While this was the base of their success, it also lead to a few controversies when others did not see their way.

Hyrule: Land of the Legend joined forces with Hyrule.net's webmaster Dustin in early 2005 to host the website under the domain name hyrule.net. Despite a successful year, the cooperation was ended in the beginning of 2006 with a bang, due to a disagreement with the site's content management, Mighty Dekunut and RecklessAbadon, and Dustin as the domain name holder. As Dustin only owned the domain name, the website was kept intact and simply moved to a new domain name: landofthelegend.net 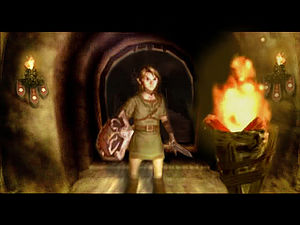 From late 2005 to early 2006, there was a real drought when it came to news on The Legend of Zelda: Twilight Princess, and the Zelda community was at a low point, complaining about how they were losing interest in the game and that they might just give up the wait. While very unorthodox, but along the to-the-point style of the site, Hyrule: Land of the Legend decided to give the Zelda community as a whole a wake-up call.

On March 4, 2006, they released a fake screenshot, claiming it to be an exclusive from Nintendo "awaiting new media at a big game event soon". The community was instructed with "look closely and you might see something new", and the community lived up again. After two days, the screenshot was dissected by community members and the hoax was revealed as a wake-up call for the community.[1]

While there was quite a lot of controversy regarding the unorthodox way of getting their point across, it did: the Zelda community was all riled up again and passionately trying to discover the secret behind the screenshot.

One of the fiercest and longest feuds in the Zelda community, was that between Hyrule: Land of the Legend, and Mike 'TSA' Damiani. The feud started after E3 2006, though they had clashed before when Land of the Legend called out TSA on some of his statements that were (later proven to be) incorrect. After E3 2006 though, the rivalry escalated when TSA started accusing Land of the Legend of stealing image content and not crediting him for news items that TSA claimed to be the source of. Land of the Legend denied these accusations and called TSA out on providing false information and lying in regards to a number of issues.

The website's main goal was to offer a professional approach to reporting on The Legend of Zelda-games, with fast and reliable news posts on anything related to the games or the community. In its history, the website gained fame for several exclusive news items, and with the Hylian News Service also provided a fast and reliable news service to other game media outlets.

The Hylian News Service was an exclusive e-mail service that Hyrule: Land of the Legend offered to several other media outlets, among which were Kotaku, Eurogamer and the Advanced Media Network. It offered a fast and reliable newsletter, and helped other outlets with images and such. On several occasions, both with exclusive news items and with more regular ones as well, Hyrule: Land of the Legend was credited as a source by media outlets like Kotaku, Eurogamer, the Dutch Power Unlimited magazine, the German GamePro magazine and the official Dutch Nintendo magazine N-Gamer.

From the very beginning, Hyrule: Land of the Legend was a multi-language website, though it started with only English and Dutch. Soon though, this number grew and in the end, the website provided coverage in the English, Dutch, German, Spanish, French, Portuguese, Italian and Finnish language. While not the first Zelda website to do so, they were the first and still only website that offered that many languages, all translated by editors, rather than an automated translator.

While not every single article on the site was translated, news items and (p)reviews were all available in each of the languages.

Introduced in 2006, the Hyrule Comic was a weekly comic from one of three comic artists at Land of the Legend, but also featured some guest comics. The section also kept track of Zelda appearances in other webcomics like VG Cats and Dueling Analogs and had a section where members could send in their screenshot dubs.