This article is about the in-universe objects. For the real-world merchandise, see Merchandise/Apparel and Clothing. 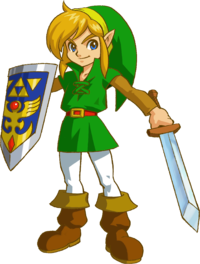 Clothes are worn by Link throughout The Legend of Zelda series.[1] For the majority of each game, Link wears the iconic Green Tunic, although he can sometimes obtain new types of clothes that grant new abilities, such as breathing underwater or decreasing the damage received from enemies. Each type of clothing has a similar style despite varying in color and name: a long shirt that reaches above the knee, having short or no sleeves.

The Green Clothes is the default type of clothing worn by Link throughout the majority of each of his adventures, and because of this, it has become a symbol of the hero who saved Hyrule from evil.[2][3] Unlike the other types of clothes, it does not grant the young hero any abilities. In some games, such as Twilight Princess and Skyward Sword, Link wears a chain mail underneath it to further protect himself.

First introduced in The Legend of Zelda as the Blue Ring and Red Ring, the Blue Mail and Red Mail increase Link's defense, cutting the damage he receives from enemies by one-half and one-quarter, respectively.[4][5]

Certain types of clothes provide Link with special abilities. In Link's Awakening DX, the Red Clothes double the attack damage of Link's sword. The Zora Tunic and Zora Armor grants the young hero the ability to breathe underwater,[6] while the Goron Tunic permits him to resist extremely high temperatures.[7] In Twilight Princess, the Magic Armor allows Link to lose Rupees instead of Hearts when he is hit by an enemy.[8]

In Tri Force Heroes, the Links can wear various Outfits which grant them different powers and abilities depending on the Outfit worn, such as throwing large Bombs or finding Hearts more frequently. Outfits are crafted at Madame Couture's using a recipe of Materials found in Levels and a certain amount of Rupees.

In Breath of the Wild, Link has a number of different types of clothing known as Armor which all have special abilities, such as a Warm Doublet that protects Link from taking damage from the cold.

In some games, Link does not start out with his traditional Green Clothes. Games such as Twilight Princess and Spirit Tracks feature the young hero wearing clothes that are typical to his homeplace, such as the Ordonian Outfit and the Engineer's Clothes, respectively. Like the Green Clothes, these do not give Link any new abilities or an enhanced defense.

In the Super Smash Bros. series, playable characters can wear differently colored outfits or skins, called alternate costumes, or color changes. These are usually recolors of a character's appearance, intended to distinguish between players using the same character. Like all other characters, Link, Young Link, and Toon Link can wear different alternate costumes in their respective appearances.

In Super Smash Bros., Link can wear the Kokiri, Goron, and Zora tunics, as well as a lavender tunic.

In Super Smash Bros. Melee, both Link and Young Link can wear the Kokiri, Goron, and Zora tunics, as well as a white and a black tunic.

In Super Smash Bros. for Nintendo 3DS/Wii U, Link can wear the Kokiri, Goron, Zora, violet, golden, and Dark Interloper tunics, as well as a tunic resembling his Skyloft clothes from Skyward Sword, and a tunic resembling the Fierce Deity Link. Toon Link can wear green, red, blue, violet, and lavender tunics, as well as the previous tunics resembling Link from The Legend of Zelda and the Dark Interlopers. He can also wear a tunic that resembles pre-release artwork of Link from The Wind Waker, with brown sleeves instead of green.

In Soulcalibur II, Link's choice of tunics is similar to that of the Super Smash Bros. series; however, he only starts off with the Green and Red Tunic. To obtain the Blue Tunic, the player must buy it in the Castor Shop for 21,000 Gold, found in the Extra Chapter 1 of the Weapon Master mode. Only after buying the Blue Tunic can the player buy the Blue Ring Tunic from the original The Legend of Zelda, which is sold for the same price as the Blue Tunic.

In Hyrule Warriors, playable Warriors can wear different skins called Costumes. These are usually recolors of their existing outfit, although some Costumes feature entirely new outfits. Costumes can be unlocked through Adventure Mode. Some Costumes are only available by purchasing DLC packs.