Clawshots,(TP | SS)[1][2] also known as Double Clawshots,(TP)[3] are recurring Items in The Legend of Zelda series.

In Twilight Princess, Link finds a Clawshot in the Lakebed Temple after defeating the Deku Toad. The Clawshot can be used inside the dungeon to reach new areas by latching at vines, targets, Peahats, and grids. It can also be used to remove the armor of Helmasaurs so they can be damaged. It is also required to defeat the temple's boss, Morpheel.

In the City in the Sky, Link finds another Clawshot after defeating an Aeralfos. Once the Double Clawshots are obtained, Link can use one of the Clawshots to hang from a ceiling or wall and then fire the second one to a new target. This is required to complete the dungeon and defeat its boss, Argorok.

The Clawshots can also be used in the overworld to reach new areas and items, such as Pieces of Heart. They are required to complete the STAR Game. In the Wii version of the game, they are targeted by using the Wii Remote.

In Skyward Sword, both Clawshots are obtained at once by completing Nayru's Silent Realm. They can be used to latch onto targets, vines, and Peahats. Sometimes, Peahats must be unearthed with the Whip before they can be latched onto. 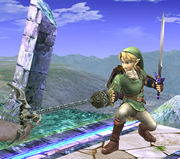 Link using the Clawshot as a grab move

The Clawshot replaces the Hookshot as Link's grab move in Super Smash Bros. Brawl. If Link misses his target after a grab attempt, he will be left open to attack while the Clawshot returns to its original position. The Clawshot can also be used as a tether recovery to grab the edge of the stage and pull himself back up to it. The Clawshot is more efficient since it automatically latches on to a nearby ledge instead of having to fire it at the precise time.

In Hyrule Warriors, the Clawshot appears as a temporary upgrade to the Hookshot. To upgrade it, a Warrior must find the Clawshot by defeating enemies or destroying pots. By creating the Whip Badges, the duration of the upgrade can be increased.