Chambers of Insight is a practice Stage in Four Swords. The Stage features various areas to practice with most of the game's many items as well as learn the different techniques that will be needed to complete each level and to defeat certain enemies. Throughout the Stage are Stray Fairies that will give the Links tips on how to complete their adventure.[1] All of the Links must stand on the Warp Zones to be transported to the training area they wish to go to.[2] In the middle of the chamber is a test that the Links can take to prove the skills they have learned.[3] The mini-boss that must be defeated at the end is an Ice Wizzrobe.

The Chambers of Insight can be exited at any time by standing on the warp zones in the southern portion.[4] 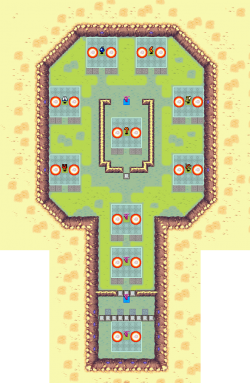 A map of the main chamber 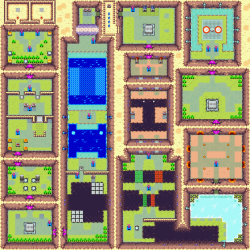 The destination of the first set of Warp Zones

The floor that the first set of Warp Zones lead to teaches the Links about the basic techniques of gameplay, such as gathering Rupees and pressing switches to open doors. 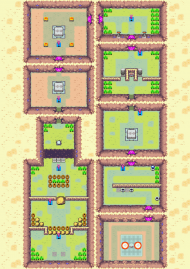 The destination of the second set of Warp Zones

The floor that the first set of Warp Zones lead to is much shorter than the first. It teaches how to lift rocks, press big switches, and how to defeat certain enemies, such as Nokkun, Bob-omb, and Hikkun.

Floor of the Test

This floor tests a mix of the puzzles and techniques introduced on the floors through the other Warp Zones.

In the northern portion of the chamber are Warp Zones leading to floors that teach the Links how to use all of the items appearing in the game, except the Gnat Hat encountered on the first floor and the rare Chain Chomp. They are also taught how to take advantage of the items' unique abilities and use them to solve various puzzles.