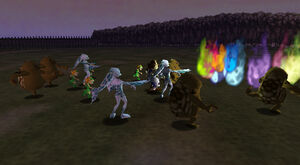 The races of Hyrule in celebration at Lon Lon Ranch after the defeat of Ganon in Ocarina of Time.

Celebrations in The Legend of Zelda series denote the happening of a marvelous event, such as the restoration of peace, or of an event yet to come, such as the Carnival of Time in Majora's Mask. Such celebrations are often marked by multi-racial participation, high attendance, and a showcase of wares, whether it be pyrotechnics, confetti, goods/services, dancing, or any other form of entertainment or expression.

During the finale of Ocarina of Time, the collective races of Hyrule gather and surround a large bonfire at Lon Lon Ranch, carrying on and reveling in the defeat of Ganon and the return of peace to their land. The Sages also join in on the celebration, but eventually retard, zooming out into the sky in Sage-specific colored balls of light. Oddly, while the Kokiri are said to die if they leave the forest, they are joyous and very much alive during this time.

The Carnival of Time is held every year in Clock Town to celebrate the four gods of Termina.[1] Clock Tower transforms its clock face the very start of the carnival day (midnight) into a gathering platform, while the Oath to Order is played.[2] In the days before the carnival, many performers and dancers gather in Clock Town, and merchants come from far and wide to sell their goods. The carnival has been rumored to magically bless marriages that take place on the carnival day.[3]

Even with the ominous Moon descending directly upon the Clock Tower, the people of Clock Town continue to work on the carnival,[4] despite their fear and knowledge of its inevitable trajectory.[5] Because of the moon's descent and in fear of its approach, the population that normally gathers on the clock face is absent;[6] only Skull Kid, the bringer of the Moon, stands on the clock face.

A Picori Festival is held every year to celebrate the coming of the Picori.[7] Held in Hyrule Castle Town, it includes an impressive sword-fighting tournament, in which the winner gets to touch the sacred Picori Blade.[8]

Link attends the festival with Princess Zelda.[9] At the center of the Picori Festival lie four stands: Brocco's vegetable stand, Beedle's fruit stand, Pina's mini game stand, and a final stand where a Hyrule resident, Marshall, tells of the Picori legend. To the north of the Picori Festival stand two people from the Wind Tribe, and a vassal guard stands by Funday School as a dispatched festival security officer.

The Hyrule Festival also takes place in Hyrule Castle Town. Link is sent to present Princess Zelda with the Ordon Sword and Ordon Shield, as gifts from Ordon Village's best craftsmen.[10] Hyrule is consumed by Twilight before Link is able to leave even Faron Woods, and Link's Hyrule Festival mission turns into a darker search to find Princess Zelda; the general populace has been turned into spirit beings, as Link finds out later in the story, rendering the Hyrule Festival a footnote as compared to the more pressing matters at hand.