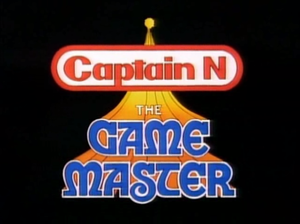 Captain N: The Game Master is an animated series based on the most popular video game characters from the late 1980s and early 1990s. Produced by DIC Entertainment, the show aired a total of 34 episodes from September 9, 1989 to October 26, 1991. Each episode lasts for approximately 22 minutes.

During the show's third and last season, NBC began making changes to accommodate time for more news programs, and as such, significant budget cuts were made for most cartoons on the network, including Captain N.

Kevin Keene, a teenager from Northridge, California, is brought to another universe known as Videoland, along with his dog, Duke, to defeat the evil villainess, Mother Brain, who is trying to conquer Videoland. Kevin has been brought to defeat her, as foretold in an Ancient Prophecy. He is given the title "Captain N: The Game Master" and joins the "N Team", which consists of Princess Lana (the Ruler of Videoland), Simon Belmont (the hero from Castlevania), Mega Man, Kid Icarus, and Game Boy (a giant supercomputer). The N Team goes up against the evil Mother Brain and her minions, King Hippo (Punch-Out), the Eggplant Wizard (Kid Icarus), and Dr. Wily (Mega Man). These forces of good and evil go up against each other and often find themselves in comical, hilarious situations.

The Legend of Zelda in Captain N episodes 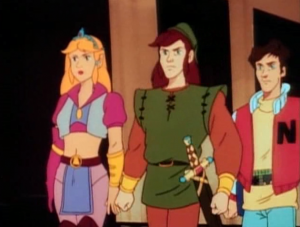 Often times, Kevin and his team would visit other kingdoms of Videoland and become allies with its main heroes. During season 2, Link and Princess Zelda were featured in three episodes: "Quest for the Potion of Power", "Once Upon a Time Machine", and "Having a Ball". Although the young hero and the princess also appeared in The Trojan Dragon, they only played a small role in the episode and appeared for just a few minutes. Jonathan Potts, Cynthia Preston, and Len Carlson reprise their role of Link, Princess Zelda, and Ganon, respectively.

Most of the Zelda elements for the show were taken from The Adventure of Link. Unlike The Legend of Zelda TV series, Link is portrayed as an older, more mature hero who is no longer obsessed with trying to steal a kiss from Princess Zelda. However, he is still depicted as a brave warrior who will do anything to protect Zelda, Hyrule, and the Triforce. Zelda's personality only changed slightly, being a fair princess who rules the kingdom of Hyrule and is good friends with Princess Lana. Like in the Zelda cartoons, she is skillful with the bow and often uses it during battle.

Quest for the Potion of Power

Main article: Quest for the Potion of Power

Kevin meets Princess Zelda and Link for the first time, and he joins them in a quest to retrieve the Potion of Power before it is used to revive Ganon.

Once Upon a Time Machine

Main article: Once Upon a Time Machine

Kevin's Power Pad and Zapper is stolen by Count Gruemon while he is having a picnic with Link and Princess Zelda in Hyrule. Link joins him on his adventure to retrieve it from the villain while journeying across the world of Puss 'n Boots: Pero's Adventure.

Main article: Having a Ball

While Princess Zelda and Link are away at a ball hosted by Princess Lana, Eggplant Wizard and King Hippo infiltrate North Castle to steal the Triforce.

Kevin and his team are trying to stop Dragonlord's plan of hatching a powerful Golden Dragon from a golden egg. Link and Princess Zelda help Kevin build a wooden dragon using wood from the Dragon Wood Forest so that the N Team can infiltrate Dragonlord's lair and stop him.