Cameos of The Legend of Zelda in Third-Party Media

The Legend of Zelda series has made numerous Cameos in Third-Party Media. Elements and characters from the series have appeared in a number of third-party games and related media. This listing does not include appearances in first and second-party video games. Please visit Cameos of The Legend of Zelda in Nintendo Media for examples of these. For unlicensed parodies and homages in other media, see The Legend of Zelda in popular culture.

Main article: amiibo § Ace Combat: Assault Horizon Legacy +
Link and Zelda-themed planes can be unlocked by scanning the Link or Toon Link amiibo, and the Zelda or Sheik amiibo, respectively. 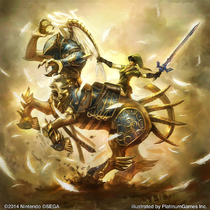 Artwork of Bayonetta dressed as Link while posing with an Acceptance

In the Wii U version of Bayonetta and Bayonetta 2, the titular character Bayonetta and the side character Jeanne appear with multiple Nintendo-inspired outfits, including the Hero of Hyrule costume based on Link. With this costume, they use the Master Sword and Hylian Shield, with the Master Sword replacing the Shuraba Sword and the Shield used to parry and counter incoming attacks. Other elements from The Legend of Zelda series also appear, such as collectible Rupees and jingles that play when opening a locked door or a chest.

The Nintendo Switch version of Diablo III features a Ganondorf Transmogrification set, a Cucco pet, and Triforce portrait frame. Armor based on Link's Tunic was planned, but was scrapped during development.[citation needed]

Miu Hinasaki, one of the playable protagonists in Maiden of Black Water, is capable of wearing an alternate costume that grants her the dress of Princess Zelda from Hyrule Warriors.

If there is saved data for The Wind Waker on a memory card in the Nintendo GameCube, Psycho Mantis will prove his telekinetic powers to Solid Snake during their encounter by reading the data and asking if he likes The Legend of Zelda.[1]

Monster Hunter 4
A costume of Link in his Skyward Sword incarnation with the Master Sword, Hylian Shield, and the Sacred Bow is available in Monster Hunter 4 after completing a quest where players have to defeat monsters known as Jinouga, Kirin, and Rajang. These monsters are chosen to represent Power, Wisdom and Courage, the three aspects of the Triforce. Defeating them grants the player a Triforce ticket that can be used to obtain the item set.

Monster Hunter Stories
The main character dresses as Link while wielding the Master Sword.
Epona can be unlocked as a Monster Mount for riding into combat.
The Palico ally, Nabiru, can wear the Skull Kid's hat and Majora's Mask.

Monster Hunter Generations Ultimate
The main character can wear the Champion's Tunic, and the Hylian Trousers and Hood. A costume based on a Korok also appears.

Main article: amiibo § One Piece: Super Grand Battle! X
By using amiibo figures through the New Nintendo 3DS or NFC Reader/Writer, various costumes based on Nintendo characters can be unlocked. Scanning the Link amiibo creates a Link costume for Zoro, which includes the Master Sword, Hylian Shield, and Majora's Mask.

Along with other Nintendo-themed cameos such as Samus's Power Beam, the Hylian Shield appears as a Shield weapon in the Japanese version of Phantasy Star Zero. It is only available using a special code.

In the Wii U version of the game, many people and objects from the Mario and Zelda series can be created.

The Legend of Zelda Zone artwork

The Legend of Zelda Zone is a free DLC-level for Sonic Lost World. In the level, Sonic the Hedgehog is dressed like Link in a green tunic and boots. The Zone features many elements from The Legend of Zelda series, including enemies, objects, and sounds. Link himself appears in his Skyward Sword incarnation.

Link is a playable character in the GameCube version of Soulcalibur II. In Soulcalibur II, Hyrule's tranquility was shattered by the arrival of several disasters, which brought opaque, ominous clouds with them. Eventually, it was discovered that an unknown magician was to blame for all that had happened. Just as the people were about to lose all hope, the sun miraculously returned as Link, having been summoned by Princess Zelda to find the disasters' source, successfully defeated the magician. The people of Hyrule rejoiced in the belief that eternal peace would rule; but it eventually became clear that the magician responsible for the disasters was in fact controlled by an evil sword from another world, Soul Edge, and that the fragments of Soul Edge had been gathering in the other world.[2]
Knowing that the resurrection of the evil blade must be prevented at all costs, Link chose to travel to the other world and destroy Soul Edge himself, taking his trusted Master Sword and Ocarina of Time, and transporting himself off on a secret journey.[3] Through the completion of Arcade mode, Link succeeds in sealing away the evil within the Soul Edge, saving his homeland and quietly leaving the world he had come upon, leaving only a faint echo of his Ocarina.[4]

Link is the only character with a ranged attack. His fighting style retains many of his signature moves from past games in the Zelda and Super Smash Bros. series. Some of these moves include the Spin Attack, the Jump Attack, the Down Thrust, the Jump Thrust, and the Dash Attack.

Like all Soulcalibur II characters, Link has a total of 11 weapons to choose from. His starting and most-balanced weapon is the Master Sword and Hylian Shield, and the rest of the weapons must be bought in shops in various cities in the Weapon Master Mode.

The Wii U version of the game includes many Nintendo-themed costumes for the characters, including Link, Ganon, Princess Zelda and Sheik, based predominantly on their Super Smash Bros. Brawl appearances. The Link costume includes the Master Sword.

A Special Legendary T-shirt based on The Adventure of Link was released for free alongside a patch on February 28, 2019.[6]

Shin Sangoku Musou VS
The game features a costume of Link based on his Skyward Sword incarnation. The costume is equipped with the True Master Sword and the Hylian Shield; however, the equipment are only cosmetic display and cannot actually be used.

Samurai Warriors Chronicles 3
A special set of costumes based on the Hyrule Warriors incarnations of Link and Zelda are available for the game's customizable main protagonist. The costumes are unlocked in the 3DS version of the game if players have save data from the game's demo. The costumes are exclusive to the Japanese version of the game as the demo was not released internationally.