Cameos in The Legend of Zelda 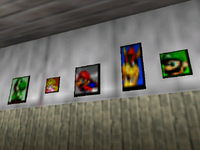 Portraits of Mario characters in Ocarina of Time

Cameos, also known as Easter Eggs, are extras intentionally programmed into a game by the developers. Throughout The Legend of Zelda series there have been many Cameos and Easter Eggs, such as images, characters, and enemies taken from other Nintendo franchises.

The photo enclosed in Christine's letter