Kenzo is a character in Spirit Tracks.[3] He lives alone in an isolated abode within the Snow Realm. He is a bridge worker and, like many characters and objects in Spirit Tracks, Kenzo's services are not necessary until later, once Link meets with Linebeck III, at the Trading Post. 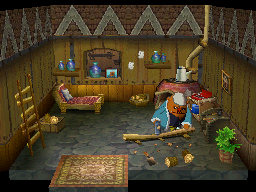 At the Trading Post, the Spirit Tracks that once smoothly ferried passing trains past this station had fallen under dilapidation, and are in need of immediate repair if Link is to continue his adventure.[4] Linebeck III implies that Link find a bridge worker that can repair the tracks and get them both out of such a predicament.[5] Link locates Kenzo in the Snow Realm, who agrees to come down to the Trading Post with him on his Spirit Train, under the condition that Link obey the speed limits and signs scattered about the Spirit Tracks, and that he not only arrives safe and sound, but precisely at the station, as well. The bridge worker surveys the damage and agrees to take on the job, for a steep fee of 5000 Rupees, a price that includes this job and any other previous debt Linebeck has carried over from previous encounters with him.[6][7]

After locating the lost heirloom of Linebeck Senior at the rear of the Trading Post, Kenzo completes his work.[8] In payment, Kenzo takes Linebeck Senior's treasured Regal Ring (worth 8000 Rupees), without giving Linebeck III or Link the remaining 3000 Rupees in change they would have received if the payment was in Rupees alone. Although it is not necessary for any aspect of the future plot, the bridge worker will wait at the Trading Post until the time comes when Link is available to ferry him back to his home in the Snow Realm.[9]

Some time later, the Anouki of Anouki Village require Kenzo to aid them in their present "neighborhood watch" mission, carried out by all the village's inhabitants, by erecting a wooden fence around the town's premises to keep so-called "monsters" out.[10] Kenzo is reluctant to go at first, but after realizing an expert craftsman will accept any job, no matter the size or the relevance, he submits.[11][12] After ferrying him to the small town from his abode within the Snow Realm, Kenzo immediately goes to work on the fence, with the 15 logs of Lumber Link also transported to the village via Spirit Train.[13][14] The Bridge Worker makes little work of the fence (as long as Link doesn't wait around at Anouki Village), and after its completion, Link receives a gratuitous Force Gem from one of the Anouki; the Force Gem reveals new Spirit Tracks in the Snow Realm that connect the main train track system of Hyrule to the otherwise inaccessible Snowdrift Station.