From Zelda Wiki, the Zelda encyclopedia
(Redirected from Bosses)
Jump to: navigation, search 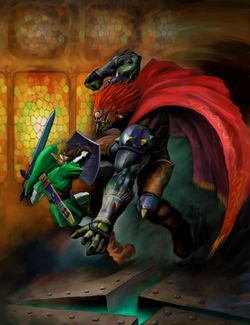 Link fighting Ganondorf, the final boss in Ocarina of Time

Bosses are a recurring pivotal aspect appearing in The Legend of Zelda series.[citation needed] A boss is a creature or character that usually serves as the final obstacle to beat in a dungeon, having an attack array and pattern unique to it and generally being more powerful than the normal enemies.

A boss lurking a main, regular dungeon has two purposes: One, it keeps a Heart Container that is left upon its defeat, which helps Link to gradually increase his initially short life meter. The second purpose is storyline-based; the boss is somehow linked to either something the young hero must collect or someone he must rescue (or both) in order to succeed on his quest.

Bosses are known for the following characteristics: For one, they have a weak point that can only be exposed through a period of Critical Point, which reveals after Link finds a way to expose the weakness or renders his opponent stunned; this is generally related to the item he has found in the current dungeon, though the way said item has to be used isn't always obvious. Also, in some games bosses either have a particular theme in common, or some (or even all) of them have a unique one each. In most games, their whereabouts are obstructed by a special door that can only be opened with a Boss Key (or a variant of it).

Bosses may or may not have clear origins. A large group of bosses in the series shares similarities to regular enemies in visuals, behavior and weaknesses. This means, essentially, that certain bosses are simple enlarged, alpha versions of enemies. The first bosses in Ocarina of Time, as well as nearly all bosses from The Wind Waker and Twilight Princess, are of this type.

In addition to the Heart Containers, Quest Items may be guarded by the bosses, though not necessarily (or at least not directly). In the case of mini-bosses, they almost always leave new items when defeated. 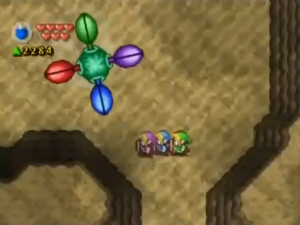 Bosses have not always carried over the same traits and characteristics. In the two Nintendo Entertainment System games, The Legend of Zelda and The Adventure of Link, bosses lack a critical point, meaning that they were designed so that Link had to damage them with the sword or another item continually, before they exterminated him. In particular, the bosses of the first The Legend of Zelda all lack a boss theme, including Ganon himself; however, their groans do give the young hero advice of their proximity. They also have the tendency of appearing multiple times since their first defeat. The further Link progresses, they reappear as bigger or stronger variations, and therefore act as mini-bosses.

In the case of The Adventure of Link, Bosses start having a particular battle theme (with the Final Boss, Dark Link, having a different one reserved for him); but they still share odd characteristics that were not revisited in later games so far: For one, each one guards an automatic Experience level upgrade instead of a Heart Container, and they guard lecterns where Crystals (already on Link's hands) must be placed (instead of, expectantly, the Crystals themselves).

In A Link to the Past, bosses start reuniting the aspects and properties that are present in current titles, namely guarding the Heart Containers and Quest Items like in the first game, and having a particular theme as in the second; an added aspect is the need of a Boss Key to find them. In Ganon's Tower, the first three bosses return as the game's only mini-bosses. Link's Awakening goes one step further by formally defining the concept of Sub-Boss as opponents or creatures that, among various other characteristics, are stronger than regular enemies but weaker than the bosses, and appear partway through a dungeon instead of being at the climax of the dungeon. In this game, the dungeon item was required to fight either the miniboss or boss in every dungeon, differing the trend in future Zelda games where typically the miniboss guarded the dungeon item, which was required to fight the boss. The game also featured a few overworld bosses. Uniquely all bosses have dialogue in this installment.

With the release of Ocarina of Time, bosses put into practice the concept of Critical Point, which forces Link to think about a strategy to weaken them and then use his sword to strike their weaknesses. This process also debuts the need of using dungeon items in the battle; said items, in the majority of the cases, are now guarded by the mini-bosses, most of which may also be fought up to twice in the same dungeon. Ocarina of Time is also the first game where at least two of the regular bosses share a theme that differs from the usual boss music.

Majora's Mask retains most of the established boss elements, but also sports some that have not been seen in any other game to date. The bosses themselves often require Link to shapeshift into one of the alternate mask forms, as the dungeon items are now insufficient. In addition, the dungeons have two different roles for the mini-bosses: Besides guarding the main item, they also guard the Boss Key. This is also the first game in which some mini-bosses are optional (found in secret zones), as well as the first game where bosses can be replayed anytime.

From Oracle of Seasons to The Minish Cap, bosses and mini-bosses retain the aspects shown by their Ocarina of Time counterparts. In the case of The Wind Waker, however, some new features are still introduced: Every boss has now its own battle theme, and they can be refought as in Majora's Mask; also, mini-bosses start becoming susceptible to be degraded to regular enemies, mostly because Link's weaponry increases over time and newer items are capable of obliterating them in fewer hits, sometimes in only one.

Although some of the previous games premiered bosses having two or more battle phases, particularly the final bosses, Twilight Princess exploits the concept to a new level. With the exception of Fyrus (which only has one phase), all bosses are first attacked with the dungeon items only, as they initially lack Critical Points. When the second phase begins, they attack more aggresively and time comes for Link to temporarily stun them to finally use his sword. Mini-bosses, as in the case of bosses, start showing unique battle themes as well, though a few of them still adhere to a main mini-boss music. 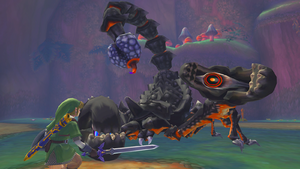 Link fighting Moldarach in an early demo of Skyward Sword

In both Phantom Hourglass and Spirit Tracks, bosses are fought in totally new ways thanks to the properties of the Nintendo DS's control interface. Fighting them are among the rare instances in which the screens' perspective may mimic that of the console 3D games, and sometimes the screens themselves provide the only clues indicating how exactly to damage them (an example being Crayk). Interestingly, Phantom Houglass lacks dungeon mini-bosses (most of them are fought in the overworld, only a group of Phantoms serve the role at the end of the Temple of the Ocean King), and bosses once again have all only one battle theme, with the exception of the final boss (Bellum). Spirit Tracks partially reverts these changes.

For Skyward Sword, a property commonly seen in the first 2D games returns: Two bosses are fought more than once through the game, with the later encounters taking place outside the dungeons where they were originally found. Three main bosses, including the final one, are fought in the overworld, and one of them is also recurring. When it comes to the combat itself, the motion controls provided by the Wii allow more strategic and precise means of attack, particularly in regards of the sword slashes' directions. Nearly all mini-boss fights, in fact, are based on this type of swordplay, as they will frequently guard different parts of their bodies when they are not attacking, so Link has always to try to hit the unprotected spots or else he will lose precious time. When it comes to audio, two bosses reuse respectively the theme of other two bosses, and only the mini-bosses fought in the Eldin-located dungeons have a different theme to the main one.

There are two main criteria to classify bosses, as mentioned below.

The ultimate goal of most games is to defeat the Final Bosses, which are the cause of the evil plaguing Hyrule and other lands. They are expectantly more challenging than regular bosses, and are almost always fought in multiple phases that involve long cutscenes in-between. It is not uncommon to use several items from the inventory during these battles, in conjunction with the ones found in the current dungeons.

There are also second-in-command bosses in certain games. Though regular bosses gameplay-wise, they are more prominent storyline-wise, due to them being the most closely related to the Final Boss. Defeating them requires more complex strategies than other bosses, these strategies often rely on special tactics, and the battles may be divided into phases, similar to final bosses. In some games, like A Link to the Past, Oracle of Seasons and Oracle of Ages when linked, and Twilight Princess, these opponents take the role of main antagonists temporarily, until a plot twist reveals the actual final boss, namely Ganon. While most bosses guard Quest Items, three bosses of this type have lacked any Quest Item, including Heart Containers. They are Agahnim from A Link to the Past, Byrne from Spirit Tracks, and the final fight against Ghirahim from Skyward Sword.

Most bosses are fought in dungeons, and therefore are known as dungeon bosses; however, some are fought in the overworld, and are known as overworld bosses. They are found and fought on very rare occasions, and may also be optional anyway. Examples range from mini-bosses (Turtle Rock in Link's Awakening, Twilit Bloat in Twilight Princess) to final bosses (Malladus in Spirit Tracks, Nightmare in Link's Awakening).