Boomerangs are recurring Items in The Legend of Zelda series.[1][2]

The Boomerang is an item that Link can throw, at which point it will return to him. It can be used for both combat and Puzzle solving. It can be used to stun enemies, although a single hit will defeat weak enemies, such as Keese.[3] It can also be used to retrieve items that are out of Link's reach.[4] The Boomerang first appeared in The Legend of Zelda and has gone through several design changes since then. In Phantom Hourglass and Spirit Tracks, Link can draw the path that the Boomerang will take, allowing a more direct control of it.[3] Moreover, the Boomerang can also be used to turn Sparks and Anti-Fairies into Fairies in certain games.

In The Legend of Zelda, Link can acquire a Boomerang by defeating all of the red Goriyas in a certain room within Level 1 of both the First Quest and the Second Quest. Goriyas attack Link with Boomerangs. Link can use the Boomerang to stun certain enemies for a brief period of time.[5] He can also use it to instantly defeat Keese and Gels.[6] The Boomerang can also be used to collect items from a distance. The Boomerang can be replaced with the Magical Boomerang, which can be thrown further.[7]

In A Link to the Past, Link can obtain a Boomerang in Hyrule Castle. It is contained in a Treasure Chest a few rooms before the prison where the Ball and Chain Trooper holds Princess Zelda captive. It appears as a Big Chest on the Map, but is in fact a Small Chest. If Link fails to collect the Boomerang in the Hyrule Castle, he can find another one in the house of the Sweeping Lady in Kakariko Village. If Link does not open either Chest, he can obtain a Magical Boomerang from a Chest in the Village of Outcasts. Link can also obtain a Magical Boomerang as an upgrade to the Boomerang at the Waterfall of Wishing. The Boomerang is blue, while the Magical Boomerang is red, faster and can be thrown farther.[8] Both varieties can be used to stun enemies, hit Switches, and collect items from a distance.

In Link's Awakening, Link can obtain the Boomerang by completing the Trading Quest and using the Magnifying Lens inside a hidden Cave at the eastern side of Toronbo Shores. Here Link will meet a Goriya who will offer to give Link a Boomerang in exchange for an item. The Boomerang can be used to stun enemies, hit Switches, collect items from a distance, and cut bushes. The Boomerang is one of the two items able to destroy Anti-Faeries, the other being the Magic Powder. It is also the only weapon able to defeat a Spark. It can also defeat certain enemies in one hit, such as Ghinis. The Boomerang is the most effective weapon against the final form of Nightmare, as it can be defeated in one hit.

In Ocarina of Time, the Boomerang can only be used by Link as a child. It is the main item Inside Jabu-Jabu's Belly. The Boomerang is needed in order to defeat Tailpasarans, Parasitic Tentacles, the Big Octo, and the Boss of the Dungeon, Barinade. It also allows Link to collect distant items such as Gold Skulltula Tokens. It can be used to stun and defeat certain enemies. Before being thrown, the camera shifts to a first-person perspective, allowing Link to aim. The camera will remain in a third-person perspective if Link is Targeting something. When Targeting, the Boomerang will follow its target until impact.

In Oracle of Ages, the Boomerang can be found in the Rolling Ridge as a prize from the Goron Shooting Gallery. It is an optional weapon in this game.

In Four Swords, the Boomerang appears in various Stages. It can only be used in the Stage where it was obtained. It is useful for collecting Rupees.

The Boomerang is the main item of the Forbidden Woods in The Wind Waker. In addition to stunning and defeating enemies, collecting distant items, and activating Switches, the Boomerang can lock on to up to five different targets.[9] This ability can be used for solving puzzles involving Switches or for collecting multiple items in one throw. The Boomerang is needed in order to defeat Kalle Demos, the Boss of the Forbidden Woods, and Puppet Ganon.

In The Minish Cap, the Boomerang can be bought in Stockwell's Shop for 300 Rupees. It can be upgraded to the Magical Boomerang by Fusing Kinstones with the Tingle Siblings?.

In Phantom Hourglass, the Boomerang allows Link to to draw a specific path for it to follow. The Boomerang's path has a range limit.[3] It can be used to stun and defeat enemies, hit Switches, and collect items from a distance. It is the main item of the Temple of Fire.

The Boomerang's flight path can be drawn in Spirit Tracks, similarly to how it behaved in Phantom Hourglass. It can be used to stun and defeat enemies, collect distant items, and hit Switches from afar. It can also fly through Fire to light Torches or fly through ice to freeze water. It is the main item of the Snow Temple.

In Tri Force Heroes, the Boomerang can be used to grab another Link and pull him toward the wielder, and has the ability to hover in place for several seconds at its furthest point by holding the Item button. While wearing the Boomeranger Outfit, the Boomerang becomes larger and gains the ability to carry two Links, pass through enemies, and deal damage to them.

Boomerangs first appear in the Blazing Trail where all three Links acquire one, then reappear in Hinox Mine (two Boomerangs), Den of Flames, Fire Temple, Snowball Ravine, Sealed Gateway (two Boomerangs), The Lady's Lair, Stone Corridors, Desert Temple, Illusory Mansion (three Boomerangs), Grim Temple, Dragon Citadel, and Sky Temple (one Boomerang per Stage). They also appear in the Forest Zone, Frozen Zone, Shadow Zone and Baneful Zone of the Den of Trials, as well as the Coliseum's Volcano and The Ruins arenas.

Boomerangs are a throwing Weapon in Breath of the Wild originally used by Koroks.[2] Several other varieties of Boomerangs can also be found, including Lizal Boomerangs, Lizal Forked Boomerangs, Lizal Tri-Boomerangs, and Giant Boomerangs. The Sea-Breeze Boomerang, which is based on the Boomerang from The Wind Waker, can also be obtained at random after using either the Super Smash Bros. or 30th Anniversary series Toon Link amiibo. After being thrown, Link must manually catch the Boomerang when it returns to him. If the Boomerang flies into an object or wall, it will fall to the ground and will not return to Link.

The Boomerang is one of the most used items in The Legend of Zelda TV series, and one hit from this weapon is capable of defeating most of Ganon's minions. It is mostly used by Princess Zelda, although Link, Moblins, and Goriyas wield it as well. The Boomerang first appears in "Cold Spells", where Zelda defeats various magically-possessed cleaning supplies with it. Later, in "Sing for the Unicorn", Zelda once again uses it to defeat an Armos Knight and Ganon, rescuing Link and her father in the process. The Boomerang shown in "That Sinking Feeling" is given to Zelda by Link so that the two of them can fight off several Tektites that have ambushed them. Link is not shown wielding this item until the "Stinging a Stinger" episode, which he uses it to defeat a Gohma with the help of Zelda's Magic Rope. Although the series mostly exemplifies the use of the Boomerang for fighting enemies, the "Doppelganger" episode demonstrates how Zelda uses the Boomerang to break free from the ropes that Ganon had tied around her hands.

The Boomerang appears in The Legend of Zelda Game Watch. One appears in each room, and Link must collect it and use it to defeat all the Iron Balls.

The Magic Boomerang from The Legend of Zelda makes an appearance in the Day of the Triforce story of The Legend of Zelda comics by Valiant Comics comic. After Princess Zelda and Cassiopia arrive to the Water Town of Saria to fight off the monsters that have attacked the town, Cassiopia uses the Magic Boomerang to free her husband, the River Man, from the chains that bind him.[10]

In Zelda's Adventure, the Boomerang appears as a Spell which lets Zelda cast Boomerang projectiles with her Wand. It can be found in a small area in western Plain of Andor with a lone Goriya, which drops the Spell after being defeated. The Spell costs 1 Rupee to use. 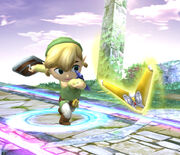 The Boomerang functions as Link's Neutral Special Move in Super Smash Bros.. The Boomerang is based on its iteration from Ocarina of Time.

The Boomerang from The Wind Waker also appears as a collectible Sticker.

As Link battles Blaaz in the Temple of Fire, Ciela points out the location of a Treasure Chest.[11][12] Link opens the Chest to find the Boomerang.[13] With Ciela's guidance, Link uses the Boomerang to defeat Blaaz's split form and eventually destroys the monster.

The Boomerang appears as an item in Hyrule Warriors. It can be upgraded temporarily to the Gale Boomerang by collecting the Boomerang power ups. The Boomerang is able to slice through vines that block pathways. Manhandlas and their Stalks are weak to the Boomerang and it is also one of the items used to fight Ganon with. In the Master Quest DLC pack, the 8-Bit Boomerang from The Legend of Zelda appears as a weapon for Impa. It is statistically identical to and part of the Biggoron's Sword weapon type.

The Boomerang appears as an item in Cadence of Hyrule, where it can be wielded by Cadence, Link, and Zelda. Its primary use is to stun enemies, though it can be used to break open Treasure Chests and retrieve their contents from afar.[14]

Spells in The Legend of Zelda series
Retrieved from "https://zelda.gamepedia.com/Boomerang?oldid=853135"
Categories:
Hidden categories: