Bongo Bongo is a Boss in Ocarina of Time.[2] It is a mysterious Cyclopean shadow spirit with two large disembodied hands, and it serves as the Boss of the Shadow Temple. Once sealed deep in the darkness at the bottom of Kakariko Well,[3] the true origin of the beast is unknown. After Ganondorf came to power, the beast was able to escape its prison within the well and retreat to the Shadow Temple, where Impa went to try to seal it again.[1][4]

Bongo Bongo is noted as being one of the strangest bosses in The Legend of Zelda series. Some features that contribute to its oddity are its abilities to become invisible, to sink into a shadow and travel across surfaces, and to manifest itself as a mysterious dark energy (though the remake suggests these latter two abilities are the same). Despite its hands being separated from the main body, it still retains full control over them from a distance, allowing the creature to punch, slap, grab, and squeeze the life out of its victims. It also can shield its susceptible red eye by folding the flaps over it. It is also thought by some to be the hardest boss in Ocarina of Time, even harder than Ganon. Some even believe it is the hardest boss in the whole series, while others believe it is easy due to the systematic way of killing it. Adding to this is the fact that Bongo Bongo has the highest amount of health of any bosses in Ocarina of Time. The easiest way to defeat Bongo Bongo is to have the Biggoron's Sword, which makes the fight much easier.

When Link encounters Bongo Bongo, the battle occurs on a giant drum (most likely a Bongo, given the name) surrounded by a very poisonous green gunge that will harm Link if he touches it. Not only does it beat on the drum, but the creature sings throughout the battle with a strange voice much like the Four Giants in Termina.

After reaching the basement of the temple, Link drops down a hole and lands on a bongo drum. A brief cutscene shows a large, dark pair of hands banging on the drum, which is revealed as Bongo Bongo's, who then fades into the darkness of the room. The camera moves back to Link, and the battle begins.

To see this beast, Link must equip the Lens of Truth.[2] He must also avoid its hands when they attempt to attack him and stun its hands with arrows or the Longshot to force it to reveal its gigantic eye,[5] which is protected by the flaps. If he does not have the Lens of Truth equipped already, doing so is key, as he sees the gigantic eye charging at him. Next for him is to either shoot an arrow while he is charging at him or to time it with another weapon. If Link does not time it right, Bongo Bongo can ram into him, causing damage resulting in the loss of three hearts. With good timing, he can then hack Bongo Bongo's eye with his Sword.[5] Once repeating this process enough times, Link wins over this evil entity. As a trick, if the young hero manages to complete several Quick Spins in succession flawlessly, he can effectively pin Bongo Bongo under his sword and defeat him in one down.[6] 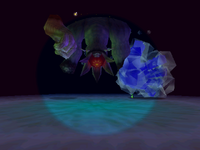 Bongo Bongo's hand being frozen by an Ice Arrow

A tip while facing Bongo Bongo is to use the Hover Boots to avoid being knocked back and forth from the drum.

Bongo Bongo’s arsenal consists of seven attacks, five of which only require one hand and his sixth attack requires both. Bongo Bongo’s seventh move is scripted, and will only be utilized if Link has stunned both hands. Three out of five of his one handed attacks are simply contact moves, but it should be noted that his clench fist cannot be stunned regularly. His other two moves contain grappling Link and either throwing him (in some cases off the drum) or crushing him, where he will not escape until he taps the A-Button repeatedly. His two handed move claps Link between his palms, but only dealing two hearts damage. Each time Link stuns a hand, it will drop either a small Magic Jar or a small bundle of ten Arrows.

Attempting to stun during Bongo Bongo’s drumming phase with either the Longshot or the Fairy Bow without Z-Targeting causes first-person aiming to revert due to Link being tossed slightly into the air, using the Hover Boots allows more time as he will float momentarily. However, when Bongo Bongo attacks he often stops drumming altogether and Link can fire into whichever hand, provided it is not a clenched fist. Additional methods of stunning can be to hold a bomb while one of his hands perform the crush grapple, the explosion will set off inside the hand.

It is possible to freeze one of Bongo Bongo’s hands in any position (including fist) by firing an Ice Arrow into one, causing his eye to open as he attempts to break the frozen hand free by smashing his opposite fist into the ice. This gives Link opportunity to prematurely fire into Bongo Bongo's eye before his scripted charge attack; however, to attempt with an Ice Arrow means a low firing rate (two chances to hit target) and a blind shot because Link cannot access the Lens of Truth due to the inability of equipping two Magic Meter draining items at once. Despite not being able to see the eye, it is still nonetheless possible to fire at it, skipping the charge phase and allowing immediate damage to Bongo Bongo's eye via the Sword - the only way to inflict damage.

If Link stuns one hand and then freezes the other, the stunned hand will revert and immediately begin attempting to break the ice. Bongo Bongo does not take any damage from being stunned, let alone additional damage from Ice or Fire Arrows, so it is wise to conserve the Magic Meter and switch into a Lens of Truth and Fairy Bow (the Longshot is ineffective in stunning the eye) combination once Link has frozen one of his hands (with the Lens of Truth, Link can Z-Target the eye). It takes Bongo Bongo five hits to break the ice surrounding the hand, which is plenty of time for Link to fire into Bongo Bongo's weak point. Once it is down and the eye is exposed without the Lens of Truth, Link can reach Bongo Bongo's eye quickly by firing the Longshot at it. It takes ten hits from the Biggoron's Sword, and twenty from the Master Sword to defeat Bongo Bongo.